What do we know about online ad viewability? Enough to know that it’s a significant problem.

We know that the American Association of Advertising Agencies (4A’s), the IAB, and the advertisers themselves all want online ad viewability to become a reality. But diagnosing a problem is much simpler than curing it, and on that front the online advertising community still has a long way to go.

Even reaching a consensus about what’s possible has been difficult.

The IAB recently released a “State of Viewability” report, setting 70 percent viewability as the standard that should be expected for online ads in 2015. The 4A’s has reportedly refused to endorse the guidelines, making the argument that brands that pay for, say, one million views, shouldn’t actually be paying for 700,000.

But the fact of the matter is, even getting to 70 percent viewability is an overly optimistic expectation for many in digital advertising. Whether it’s bot fraud and scam publishers, or more mundane problems like ads failing to load, windows being obscured in the browser, or a user scrolling quickly up or down the page, there still isn’t even a reliable way to judge ad viewability, let alone guarantee it.

But the attention being brought to this issue — and the pressure being placed on the industry from advertisers, publishers, and ad networks — can be a transformative moment in the digital ecosystem.

The drive for viewable inventory is fundamentally changing how we in the industry define quality, price, and performance. The relentless push to programmatic exchange buying has certainly caused the industry to slip into the cheap and scalable approach to online advertising. But does that math really pan out given low viewability levels and high levels of fraudulent traffic?

Approximately five years ago, CPMs on average were roughly $5, as depicted in the blue line in the chart below. The past 5 years have seen not only an increase in ad impression demand, but a supply increase at a more rapid pace through the advent of DSPs, SSPs and fraudulent impressions. A net decrease in CPMs to near $3.50 CPM is the result, as we see in the green lines depicted in the chart below. 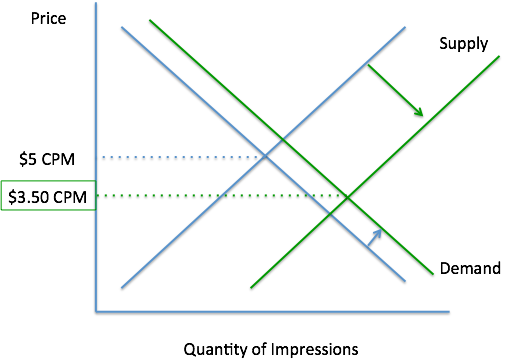 Until recently, this lowering of prices down the supply/demand curve has been viewed as a net positive effect. Unfortunately, it has obscured very important and often neglected byproducts — poor inventory, poor viewability, significant fraud, poor ad engagement, and unclear actual costs per engagement.

These aren’t just problems that affect marketers’ bottom lines. Our advertising infrastructure is the system that binds and supports the digital economy, like the tunnels, sewers, and foundations that lie unseen beneath a city.

As an industry, we will continue to push for cutting costs and inefficiencies, but there needs to be a corresponding push towards quality advertising. We need to continue to evolve how we reach our audiences through direct publisher relationships that provide high quality viewable inventory. There are plenty of other viable models being pursued by agencies, DSPs, SSPs, and ad networks, but until quality and engagement are as valued as efficiency and pageviews, these problems will persist.