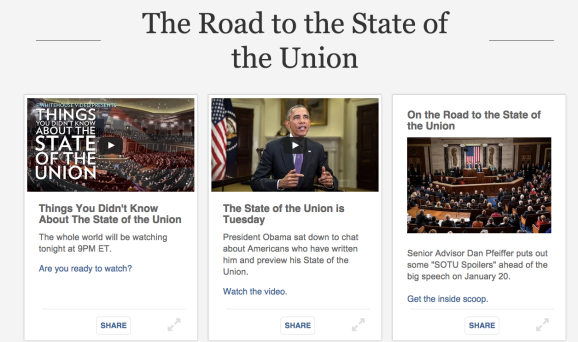 Tonight, President Barack Obama will deliver one of his last State of the Union addresses, and it’s being live-streamed online with all sorts of digital bells and whistles. Here’s a rundown of how to follow along all the political action tonight.

The White House has put considerable design power into live-streaming the speech with enhanced graphics. The simplest way to watch is via the White House YouTube channel (which we’ve embedded below). There’s a normal version, plus an enhanced version, with PowerPoint-like graphics.

Fun fact: The State of the Union is one of the only constitutionally mandated actions for the President. All the other stuff, from the Oval Office to the annual turkey pardon, merely evolved into custom. But the SOTU? That’s the law of the land.

So enjoy our little slice of constitutionally mandated democracy tonight along with VentureBeat and your social media pals. We’ll be watching (and commenting).