The video distributor reported $1.48 billion in revenue, compared to analyst expectations of $1.49 billion.

Meanwhile, Netflix stock is up slightly, closing at $348.80 per share. Last quarter the stock dropped 25 percent in after-hours trading despite the company’s modest growth. At the time, investors were largely unhappy with Netflix’s subscriber numbers.

This quarter the company has succeeded in meeting its own target of 57 million subscribers, reaching a total of 57.4 million. 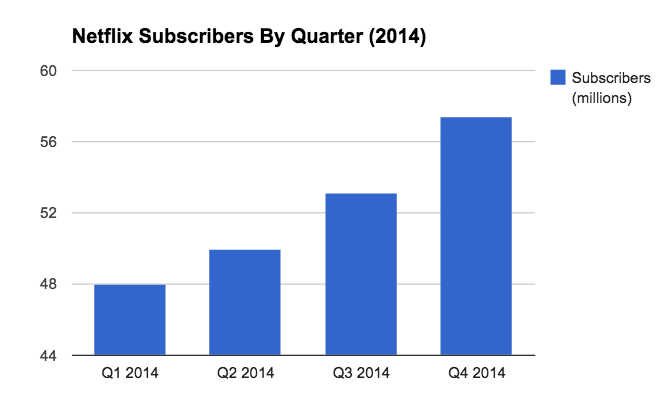 “Our original content was some of our most efficient,” the company noted in its earnings statement — Netflix loves to tout the merits of its exclusive content. Last week, Kevin Spacey won a Golden Globe Award for his performance as Francis Underwood in the Netflix original series House of Cards. However, Netflix isn’t the only video streaming service to receive accolades for its original content. Jeffrey Tambor won a Golden Globe for his role in Amazon’s Transparent this year. And Amazon Prime is not Netflix’s only competition. Longtime original film and television series provider HBO is launching its own web-based content sharing service, and Overstock.com just announced it too will begin offering original online content.

Both Overstock and Amazon can afford to lose money on its investment in media, since the majority of revenue for both companies comes from selling goods. So it will take more than just a hot original series to beat the competition. Netflix needs to show meaningful growth or else see backlash from investors like it did last quarter.

If after-hours trading is any indication, investors are pleased. Netflix is currently trading at $390 per share.