Good news for Windows Phone users today — Twitter has given its app a little update that introduces a couple of neat new features to the mix.

Now you’ll be able to use Cortana, Microsoft’s Siri-like intelligent personal assistant, to launch and write a new tweet in the Twitter app. 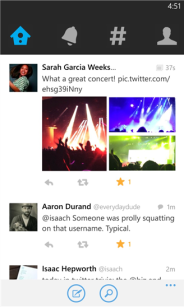 So, for example, you could say something like “Cortana, Twitter new Tweet, where’s the best place for tacos in New York,” and you’re then good to go. This will only work for those on Windows Phone 8.1, however, given that Cortana doesn’t work on earlier versions of the mobile operating system.

While a number of big-name developers continue to snub Windows Phone, Twitter has been around on Windows Phone for a while. That said, the Windows Phone incarnation has often found itself behind on updates that arrive on iOS and Android first.

However, Cortana is still in its infancy and is finding its feet as it prepares to feature in more Microsoft products in the future, including Windows Phone, Xbox One, and Windows 10, which is officially unveiled tomorrow. Twitter can be forgiven for only introducing Cortana support now.