If you’re a marketer who’s been feeling left out of vertical social networks like Doximity for doctors or ResearchGate for scientists, Shocase is looking for you.

But if you’re a data-oriented marketer, for instance, focused on effectively using your marketing automation platform, there might be less synergy.

It lacks discussion rooms or groups, for instance, where the data marketer can exchange tips about the most recent analytical tools. Young told us that his company has no current plans for discussion areas, although users can make public comments in the news feed and on project pages. The feed also offers such updates as job changes by colleagues, postings of new projects, and news in declared areas of interest. 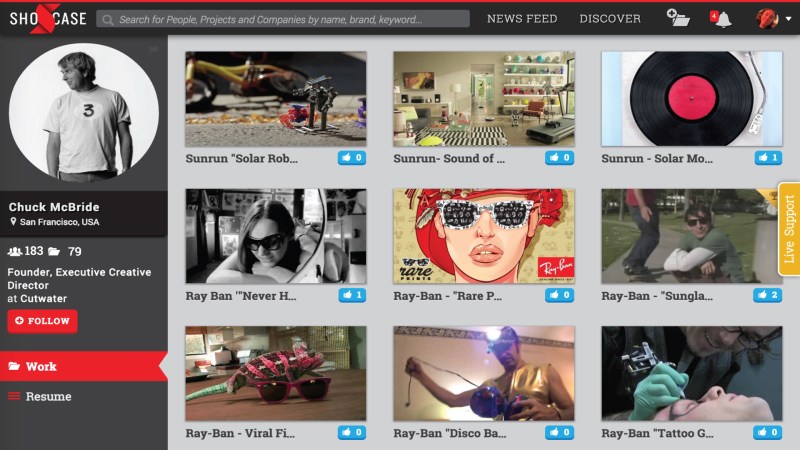 Above: A profile page in Shocase

The slick interface includes tools for curating, commenting on, and sharing work, for making contacts via texting and chat, and for finding talent. Young noted that the initial launch population of about 1,100, who signed up during the beta phase, already includes such top-end industry figures as Vince Engel and Chuck McBride. 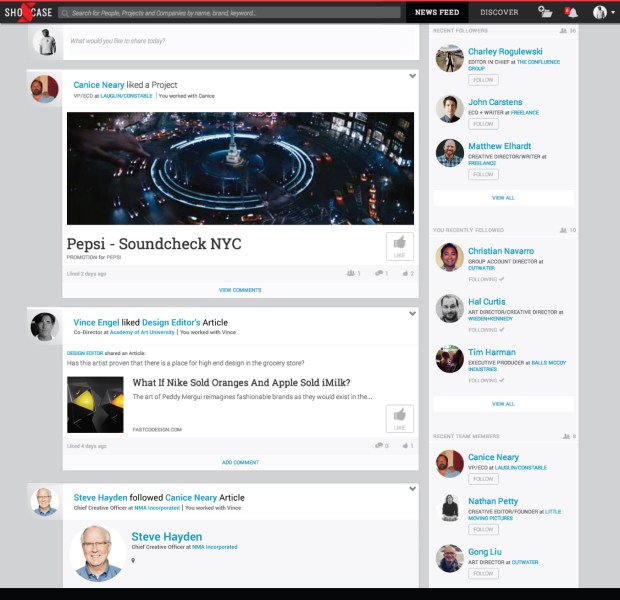 Above: A news feed in Shocase.

Parsing software scours all comments and flags potentially “scurrilous comments” for assessment by the site’s staff, which is currently over 40.

Users don’t need to post examples of all their best campaigns, as a curation engine scours the Web for images of projects relating to users’ names. It then asks the user to verify the image, declare a role in the project, and add fellow workers’ credits. Young said that the database has collected over 50,000 projects, each with a variety of images.

“We don’t see anyone [else] yet,” Young told us, “because we’re the first guys to go after this big world of marketing.”

LinkedIn, he said, is for business contacts and information exchange, and Behance is focused on “illustrators and art students.”

Shocase was founded in 2009, but Young said he incubated it for “a couple of years” before he started hiring in fall of 2012. The company has received about $17 million thus far in two rounds.

Young, who has held marketing positions at Levi’s, CVS, and Electronic Arts, has previously been involved in several other companies that he says “achieved nine-figure exits,” including Diamond Lane Communications and Yipes Communications. Cofounder and VP of product and social Matt Warburton has been head of communities at Internet betting site Betfair, and director of community management at LinkedIn and Yahoo.