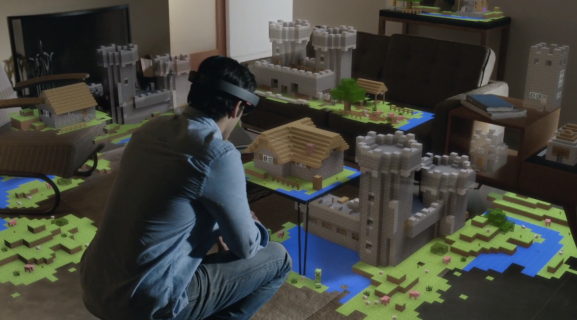 After trying out the latest augmented reality system, the Windows Holographic, at an event on the Microsoft campus today, I realized that it’d be pretty freakin’ cool to make my ordinary environment into a video game.

I’m talking about Microsoft’s implementation of Minecraft for a demo. Microsoft didn’t announce a version of the open-world block-building game for the new HoloLens gadget, to be clear, but it has a working demo. And it made a mocked-up living room in the basement of Microsoft’s Visitor Center into a way more interesting, interactive arena. And I want it — more than I’ve wanted Google Glass, Oculus Rift, or any other augmented or virtual reality doodad.

It’s one thing to play Minecraft on your tablet or console. It’s another to include pieces of real furniture into a video game — and then modify the heck out of it, as Microsoft apparently did for the demo.

I glanced at the coffee table and found that HoloLens had superimposed a castle of blocks through it. Then, with a few finger taps — essentially holding up your index finger and bending it down and bouncing it up a few inches in front of the headset — I blasted through parts of the coffee table, revealing a lake underneath. I bent down and examined it more closely. The coffee table was suddenly way more interesting than your everyday piece of furniture.

A member of the Holographic team led me toward a wall in the room that had a bookshelf. Inside were some virtual boxes of TNT. A few finger taps on top of them and — poof! — they blew up. Which left a hole in the wall.

What I saw through the hole was … a whole other world. It was invented, of course. And it made a boring old wall into a fine landscape. It was an implementation of someone’s imagination, sure, which is sort of like hallucinating. It was depicting a “hologram” through a piece of technology under development by a large multinational corporation. And one day, you will be able to buy it, legally.

Windows Holographic should be available around the time that Windows 10 is released, I’ve been told. I’ll be looking forward to that day.