PlayPhone has created a platform that allows carriers to offer their own mobile gaming store as well as social networking services that enable games to spread in a viral fashion and reduce the cost of advertising to acquire new users. In deals with carriers, PlayPhone can reach as many as 800 million mobile device owners through its platform. And it now offers those players more than 3,000 games, up from 1,000 a year ago.

Ron Czerny, chief executive of San Mateo, Calif.-based PlayPhone, said in an exclusive interview with GamesBeat that GungHo’s business development staff and PlayPhone are expanding PlayPhone services to carriers and other companies in Asia.

“This is the new frontier for PlayPhone,” Czerny said. “We are a technology company with a sophisticated social gaming platform and game store. We are in a race to become the leader in Asia, and that represents a shift in our business. Our vision is the same, but it is much more focused in emerging markets.” 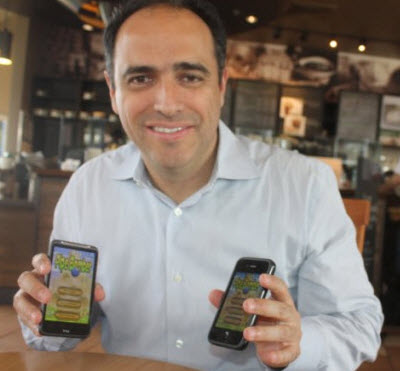 Above: Ron Czerny of PlayPhone

GungHo, a SoftBank-owned company which makes mobile games such as Puzzle & Dragons, has been broadening its reach for a while. Taizo Son, the brother of SoftBank leader Masayoshi Son, is the chairman of GungHo, and he has helped it expand beyond its core business. By taking the majority stake in PlayPhone, GungHo has added game services for developers. PlayPhone finds games from third-party game developers to put into its network, which has a few million active users. PlayPhone offers publishing services and billing services too.

“They have a vision from their roots in online gaming, and they understand platforms,” Czerny said. “We never had a presence in Asia, and now we do.”

One of the networks that recently came on board was SingTel, a Singapore communications company with more than 500 million customers across greater Indonesia. Another carrier coming on board is India’s Bharti Airtel, which has 300 million users.

Customers who buy smartphones from those companies will see an icon for a gaming store on the deck. PlayPhone will provide that store. Players who use the store can download games and share them with friends over a social network on the mobile phone. Players who share games are rewarded with currency, or Playcredits, that can be used to get more games. Carriers can use PlayPhone’s brand name, or their own, on the store.

“The question is whether one user can bring in ten or 15 friends,” Czerny said. “The cost of acquiring users is still too high in mobile, and it is going up. Social is critical. By doing this, we believe we can create a much more valuable company in the coming years.”

Czerny said that the speed of the network in Indonesia was really slow, so PlayPhone had to learn how to make the store load more quickly. Now, Czerny says, PlayPhone provides the fastest-loading store, and that know-how will serve it well as it expands in India and other emerging territories.

PlayPhone is focusing on Asia because there is no dominant mobile store, like the Apple App Store or Google Play in the U.S. Google Play isn’t available in China, where Google doesn’t do business, and as a result there are more than 300 Android app stores available in China. But Czerny said his company has learned you can’t succeed in Asia without local partners. GungHo and its parent SoftBank are helping with that. Beyond Asia, PlayPhone is also targeting the Middle East and Latin America.

“The only thing left is Eastern European markets, which we’ll put on hold for now,” Czerny said.

PlayPhone has 50 employees, mostly in San Mateo, Calif. Czerny said that the founders and employees of PlayPhone own most of what GungHo didn’t already buy.