2014 was a big year for big data, a term that gradually gained momentum to become one of the most talked-about subjects in the tech world. With 2015 fast approaching, prepare for big data’s total domination, as it, along with the Internet of Things, is set to be the focus of web and mobile.

It will become standard for businesses to try and benefit from it by analyzing as much as possible.

But what it actually is and what it does isn’t always clear to app publishers.

The number of mobile users is expected to increase in the coming years, with a greater dependency on mobile in general. By 2016, 61 percentof web traffic will come from wireless devices as opposed to desktops, contributing heavily to the growth of big data.

The challenge big data has spawned 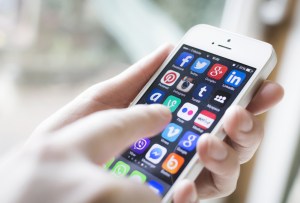 According to IDC the big data market is expected to grow from $3.2 billion in 2010 to $16.9B in 2015. In the last two years we have produced more data than all of human existence has in the years prior, and that number is expected to multiply in ways we can only imagine, thanks to the growth of the Internet of Things (IoT), the concept that all devices – everything from smartphones to appliances to heart monitors – will eventually connect and automate, and thanks to mobile, which has more than 5 billion people calling, texting, tweeting, and browsing worldwide.

It is becoming abundantly clear that data analysts are not capable of handling the influx of stats and figures, while machines fail to make real sense of it all, lacking the ability to create a logical picture. Businesses are unable to parse through mounds of data, rendering the data useless. All of this collected information lays dormant, unable to impact a business positively.

The challenge, then, is figuring out how to make sense of all that information.

Revolutionize the way you analyze data

Techies, statisticians, businesses… everyone is talking about the problem, but few are offering solutions.

Companies are attempting to create software solutions presently, but while analytics might be handling the problem on the surface, this model is not going to last with the vast amounts of data soon to be heading our way. Businesses are going to need to rely on this data for growth, but the data will become too heavy for humans to handle and too important for machines to handle. 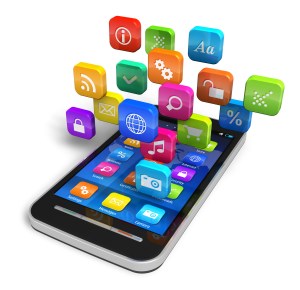 The revolution, then, lies in the data analysis process. Visual analytics solutions already exist on the web with companies such as CrazyEgg and Inspectlet, but since mobile traffic now outperforms web traffic and is expected to continue in that trajectory, the future of analytics is in visual mobile analytics.

Traditional mobile analytics tools, such as Google Analytics, emphasize the “what” in their data: key metrics such as number of users, OS used, geographic breakdown, etc., but place no focus on the “why,” which provides the reason behind the metrics.

A low user retention rate, for example, may be evident with simple data, but what is not clear is what is causing users to avoid returning to an app.

Existing visual mobile analytics tools provide visual reports, allow for diving into user behavior and experience, and present the problems. Next-generation visual mobile analytics will provide actionable insights that will move businesses forward by not only indicating exactly what the issues are, but also suggesting which measures need to be taken to correct them.

If the problem for companies is figuring out a way to streamline the time-consuming process of data analysis to optimize their app, the solution is increasing productivity with the aid of insightful visual mobile analytics.

Among the valuable features visual mobile analytics provide is user recordings, which enable an app maker to see the app through users’ eyes. Watching how users interact with the app provides an understanding into why particular actions are taken, and allows for evaluation in order to determine what works and what does not so the app can be refined and improved.

In the user recording below, you see a user attempting to create a Facebook account but running into trouble because of a technical problem, as indicated by the pop-up message.

A traditional analytics tool would just indicate a high user drop-off rate, but reasons for the drop-off would be omitted. User recordings provide insight into why users depart, which inhibits active usership, as well as how to handle to the technical problem leading to the abandonment.

Visual touch heatmaps are another useful feature. Heatmaps aggregate all users’ gestures – taps, swipes, pinches – and provide an inside view of where users are engaging with your app and help you understand your users’ behavior, the reasons for their actions, and where on the screen they are focused.

The image below features a log-in screen users encountered when returning to an app, requiring they log in again.

The touch heatmap and gesture analysis indicate that users repeatedly attempted to swipe right (marked in the red square) and 100 percent of those swipes were unresponsive, signifying that the action taken by users did not register with the app. Gaining this sort of insight into user behavior affords an app maker the ability to understand that users repeatedly attempted to bypass this login screen, but accomplished nothing by doing so. 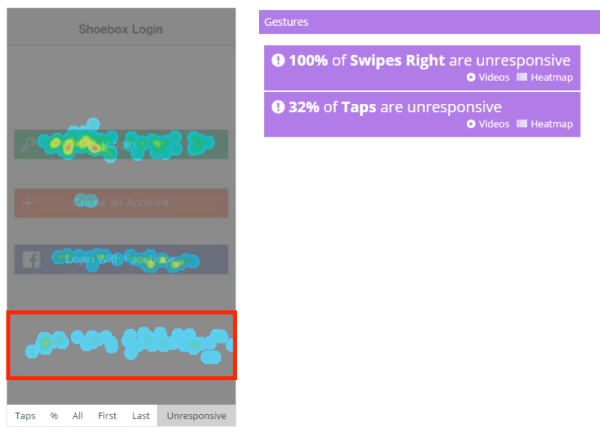 This is the precise sort of event that could lead to user frustration, potentially to the point of abandonment, and explains why user retention rates are low. Eliminating this step will clearly improve users’ experience and improve retention.

Mobile is not a trend. 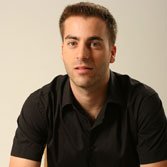 Businesses are starting to funnel money into it, understanding that there is ample opportunity in this ever-evolving channel. To remain competitive, there is a need to focus on mobile and its next-generation analytics, allowing for improved user experience and eliminating the guesswork behind its achievements.

With data about to occupy a hefty portion of business focus, now is the time to learn about mobile analytics and get a leg up on what is sure to dictate how businesses are run in the coming years.

Alon Even is VP Marketing for Appsee, which helps app developers understand their mobile app users.