For the first time in a decade, Russian independent game publisher Nival is launching a new game in the Blitzkrieg series for the PC. The real-time strategy game Blitzkrieg 3 looks beautiful, and if the game truly is as polished as Nival has shown, it could spark a revival in World War II games on the PC.

We got a hands-on preview and a briefing from Sergey Orlovskiy, the chief executive of the Moscow-based company. This is a treat since the original Blitzkrieg debuted in 2003 and Blitzkrieg 2 came out in 2005. Nival has been working on Blitzkrieg 3 for about three years, Orlovskiy said. The funny thing is that the title started out as a game about the Vietnam War. But as development progressed, the team switched gears and returned to World War II.

If it’s a hit, Nival — a Moscow company started in 1996 that has grown to 200 employees — will become a bigger player on the global stage. It is already known for games like Etherlords and Heroes of Might and Magic V, but it isn’t as well known as Eastern European game publisher Wargaming, the maker of World of Tanks. Orlovskiy says the new game is a massively multiplayer online real-time strategy game, which blends single-player and multiplayer modes that will breathe new life into the franchise

Nival has crafted several single-player campaigns with a series of missions for the Russians, the Germans, and the Western Allies. Each campaign has eight battles. 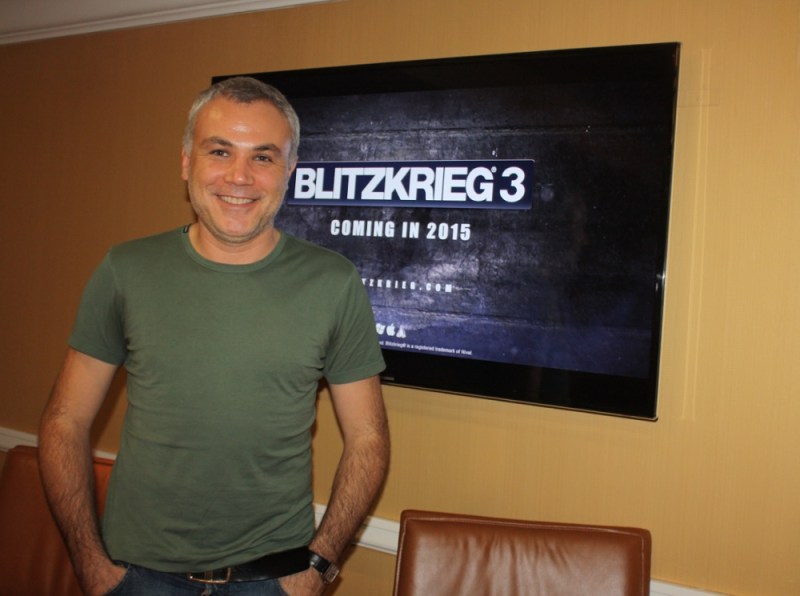 Above: Sergey Orlovskiy, CEO of Nival

The interesting twist is that the game’s design steals a lesson from Clash of Clans, the hit mobile game that focuses on “asynchronous multiplayer.” In this version of asynchronous, one player spends a lot of time setting up defenses for a base. Then, another player attacks the base. But once you have set up where you will put your traps and units, the defense is automated. As the attack begins, the other player controls his or her forces directly. But your defenders are driven by their own artificial intelligence. You can be attacked while you are offline, and then you watch what happened in a playback of the battle.

You can attack other players, win their resources, and then use those to set up an even stronger base. The strategy game is part of a very established genre, but its design takes lessons from modern games on other platforms. I find that to be very interesting.

The asynchronous multiplayer is faster paced. With synchronous play, where one player battled another in real time, the matches lasted too long and became boring, Orlovskiy said. By contrast, a player can play several asynchronous battles in the time it takes to do one synchronous match.

“The trend toward asynchronous player-versus-player is huge, and it’s a really good fit with real-time strategy,” Orlovskiy said. “We’ve taken 10 years to do another title because there was no innovation in this segment. We didn’t want to do the same game again. We feel asynchronous is the next big step.”

In the game, you view the 3D battlefield from a fixed point above the map. The artwork is extremely realistic and detailed. You can see the grass swaying in the wind, and the leaves shimmering on trees. When a tank runs over a tree, it is uprooted and falls. And the fires and explosions from tank bursts look like the real thing. Some of the movement is a little too fast, but I didn’t feel like that ruined the realism. 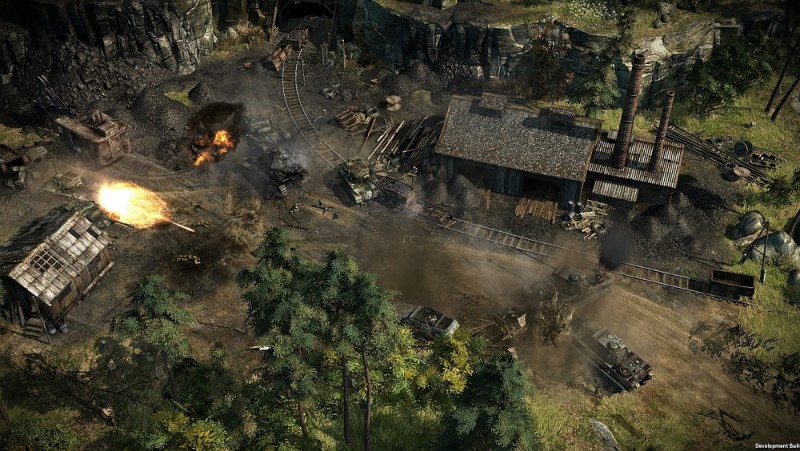 Nival has paid a lot of attention to detail, much like Relic Entertainment did with last year’s Company of Heroes 2 real-time strategy game. That World War II game focused much more on squad combat and a narrative story. You could zoom in more on what each soldier was doing, and even click on them to toss grenades at targets. By contrast, you don’t micromanage your soldiers in Blitzkrieg 3. And the game is much more like an open sandbox, where just about anything can happen on a map.

In Blitzkrieg 3, the camera is set a little higher, giving you a view of a wider section of the battlefield so you can control more units from a distance. It feels like Nival has gotten the proportions right. In Company of Heroes 2, the action is too concentrated in a series of close combat battles. With the huge Blitzkrieg maps, there’s a lot more room to maneuver. You also control more units and feel you’re more like a general, rather than a low-level commander, Orlovskiy said.

“We are pretty far from the gameplay of Company of Heroes,” he said. “You have a bigger army, and you have to set up your defense to deal with attacks from different directions. They are cinematic and focus more on Hollywood. We aren’t movie makers, so we focus more on simulation.”

The game tries to be historically accurate, but most of the battles are set up to be fun. It’s not a documentary. The scenarios are inspired by real events, but everything errs on the side of fun. There are no imaginary units, and there are very few experimental weapons for the German side.

The average single-player battle lasts for a half hour, while the multiplayer matches are about 10 minutes. There are no microtransactions as hardcore PC gamers don’t necessarily welcome them. Orlovskiy said the team wanted to make sure that you couldn’t ruin the balance of play by purchasing better units.

“We are launching on Steam, and those players don’t like microtransactions,” he said. 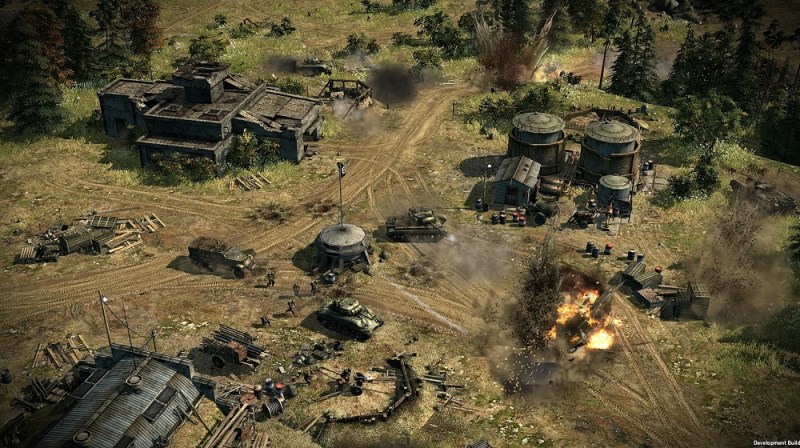 Hands-on with the Americans

I played a round as the Americans attacking a German base. I had rifle squads, bazooka teams, assault squads, machine gunners, and multiple kinds of tanks. I had around 16 different units I could control.

I sent my infantry into the woods. When they were moving, I could see the green tags on them as they moved. But once they stopped moving in the woods, they blended into the forest. That was a bit confusing for me as I forgot where some of the soldiers were. I used the infantry to smoke out German strongpoints, like anti-tank guns, howitzers, and pill boxes. When I found them, I sent in the tanks or dropped artillery shells on them.

In the first attack on an enemy factory, I lost a lot of troops. Then I wised up, but I still had to move and position the troops under the stress of constant gunfire. I had no time to plan much. I lost a bunch of my forces by failing to see a heavy machine gun and a tank. Still, I managed to take the first strong point and move on to the second. I did better after the Nival folks told me to rush the German buildings with assault troops, who can lay down their own smoke to obscure the views of sharpshooters. 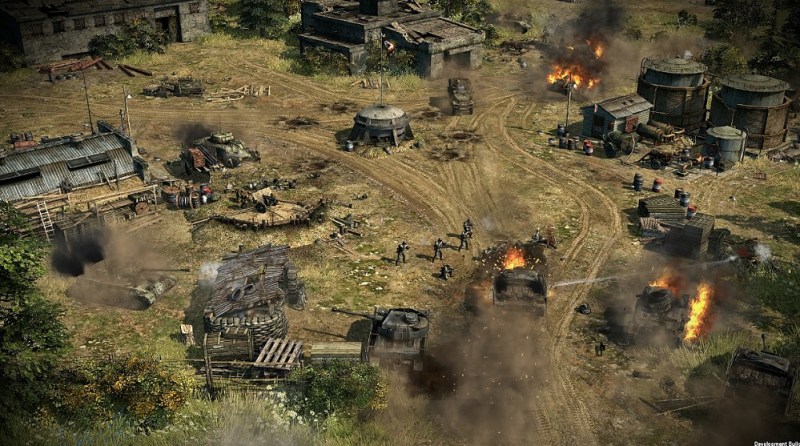 I took the second point and captured a flag at a giant mansion. But I ran out of time before I was able to capture the enemy’s third major strong point. For my first try, it wasn’t too bad a performance, Orlovskiy said. Perhaps out of kindness.

The Germans have superior armor, but the trick is in using your forces wisely. Don’t send a half-track against a Tiger tank. Sneak around it with bazooka and take it out from behind.

The game is debuting sometime in 2015 in the West. KongZhong has also licensed the game and plans to launch it in China, where the game will likely include microtransactions. The game is coming out on the Windows PC first, but it could also make it to other platforms such as Mac and Linux. And if all goes well, we’ll see a Vietnam War game soon afterward.

Yes, it’s quite possible. Another Eastern European game company — like comrades such as Wargaming and Gaijin Entertainment —  might prove to be one of the best at making historically accurate and fun games about Americans, Germans, Russians, and the Vietnamese. How about that?

“Right now, we have a great opportunity to expand,” Orlovskiy said. “In this day and age, it is much easier to become a global company.” 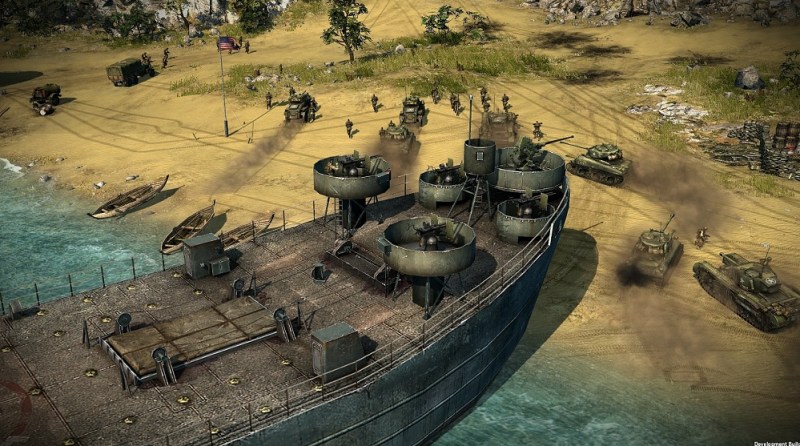