The folks at ARM, the Cambridge, England-based designer of low-power processors, are kind of greedy. They pretty much own the mobile processor market, through their dozens of licensees who make chips for everything from the Apple iPhone to the latest LG curved smartphones.

But they also want to own the Internet of Things, or smart and connected everyday devices. Jem Davies, an ARM fellow and vice president of technology, told me about the company’s plans to get its chips into Internet of Things gadgets. In fact, ARM chips are already in a ton of smart watches, coffee makers, helmets, and all sorts of other gadgets. Intel, the world’s biggest chip maker, is definitely investing heavily to take this market for itself. But ARM isn’t about to let that happen, according to Davies.

We caught up with Davies at the recent 2015 International CES. Here’s an edited transcript of our interview. 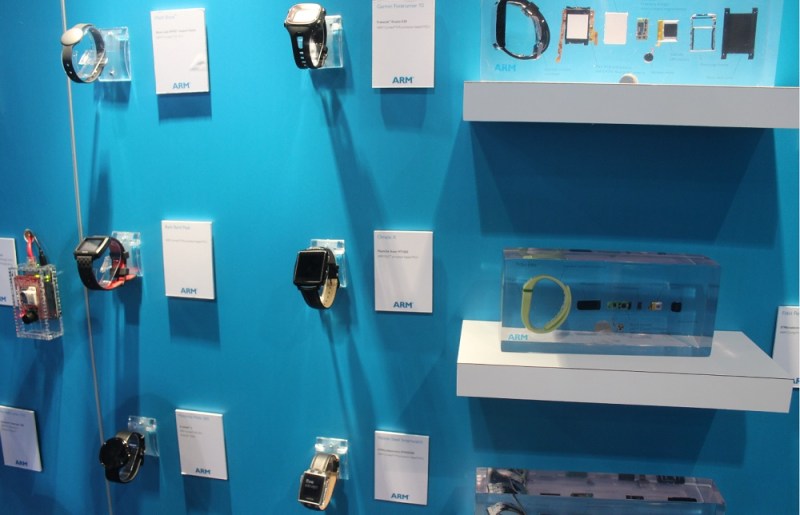 Above: ARM-powered wearables at CES 2015.

VentureBeat: I’ve seen a lot of clones of the Apple Watch already. I don’t know if you’ve seen your stuff in any of these Chinese models coming out already?

Davies: We have. Most of the smart watches and things like that have been based on ARM CPUs and GPUs as well. The first ones have come out using existing chips, mostly. We only get to know when a chip starts. We don’t necessarily know all the applications a chip goes into. Sometimes you know a great deal more about what my graphics chip goes into than I do.

VentureBeat: What sort of chip is going into these watches?

Davies: Watches are usually the Mali-400 MP1. We worked closely with Google on the specification for Android Wear. That mandates OpenGL ES2. It very specifically doesn’t need OpenGL ES3. Mali-400 is the perfect fit. It’s much smaller and lower-power than rival chips. It’s cleaning up in that space.

VentureBeat: Does it seem like a smartphone around 2007, that kind of capability?

Davies: That’s about the size of it, yeah, if you mean a smart watch as opposed to a fitness center. The fitness centers are very Cortex M, no graphics, that sort of thing. But a smart watch is a first-generation smartphone type of design. If the display is small enough, you can get quite a cut-down GPU.

VentureBeat: If you look at things that are shipping well in this Internet of Things category, or whatever categories you measure, what do you notice is actually selling?

Davies: In terms of volume there is no market in the world like mobile. Mobile, which includes tablets, is shipping hundreds of millions of units for us. It’s probably outshipping everything else 10 to 1. They’re shipping hundreds of millions of units of tablets in China. The U.S. analysts are not necessarily counting those very accurately. I’ve had to correct some U.S. analyst numbers, because they don’t see what’s going on in China.

It’s crazy. They’re doing 7-inch tablets for $35. Now, they’re not that great. They’re not a high-quality device. But they work. I bought one as a hi-fi controller, for my Sonos hi-fi. Why not? It’s probably not going to last very long, but okay, I’ll buy another one.

Tablets have almost become disposable items now. Our CEO and I did an investor breakfast yesterday morning. He was talking about seeing customer presentations where people hand out tablets to the audience. Do they get all of them back at the end? Probably not. But what you lose in the cost of it, well, whatever. It’s opening up new uses that are quite interesting. I obviously do a lot of flying. At the airport, you used to have a man holding up a clipboard with your name on it. Now it’s a tablet. Didn’t see that one coming, but it’s interesting.

They’re also becoming quite commonly used cameras. People like the big viewfinder. It doesn’t work for me – I want to hold something up to my eye and look through a viewfinder – but maybe that’s just my age. An awful lot of people now are holding up tablets to take pictures that way. That requires a lot of image stabilization, because hands shake.

The next biggest market for us is digital TV and set-top boxes. We’re in 70 percent of the market in GPU-enabled DTV, which is pretty much all TVs now. We used to have to use the “GPU-enabled DTV” line, but soon we won’t have to say that. We’ll just say DTV. The Samsung, LG, MediaTek, NovaTek, all those guys are using Mali. We have a clean sweep across there. Set-top boxes, less penetration, because you have Broadcom. They have their own GPU. But in DTV we have a very good swathe. 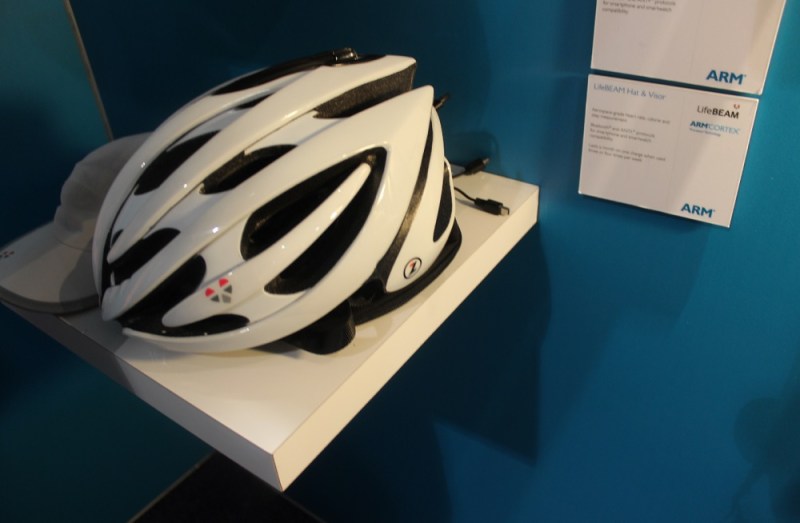 Above: ARM-powered helmet for bikers.

Davies: You don’t, but the manufacturer does. [laughs] We mustn’t get too fancy about ourselves. ARM is a components buyer. We supply technologies to people who have clever ideas. We’re feeding that.

VentureBeat: Do you think the technology is there to fairly rapidly make that something like a $30 dog feeder?

Davies: Yeah. And there, time to market is king. The guy who gets the product for that golden window of three to four months charges a lot more than anybody else. One thing we’ve put a lot of effort into is the speed with which people can integrate our IP. We deliver them a bunch of software, and they handle and produce a chip. If that process can take four weeks rather than four months, those guys have just made a lot of money.

It’s the hidden quality angle of our IP. Everyone measures the power use or the silicon area or the bandwidth. That’s all good. We concentrate on those as well. But the secret weapon, what we sell to people, is that it’s easy to integrate. An awful lot of software is already pre-integrated. We have a complete Android stack. Our graphics, video, and display processors are all pre-integrated into the Android stack. That’s a chunk of work. We’re putting a lot of work into getting people started as quick as possible.

VentureBeat: Some of these devices are pricing for a luxury market that I’m not sure exists. I saw that skateboard-like, Segway-like thing. It was $1,800. Would you buy that?

Davies: It opens up both markets. It opens up a commodity market. It’s now cheap enough to put a processor in everything. That’s not going to significantly affect the price, so it opens up a whole commodity market. But also, people are going to say, “Well, I’m going to create a luxury segment. I’ll take this capability and market it as a hugely valuable aspirational something-or-other.” That’s interesting.

VentureBeat: Give it the Gucci treatment or something?

Davies: You can pay 10,000 pounds for a smartphone. You get a diamond-encrusted smartphone. You have to applaud that. Am I going to buy one? Hell no. But it’s that sort of creativity and diversity of what the ARM partnership does that I think separates us from the likes of certain companies down in Santa Clara.

Our partners are doing some wacky stuff. Some of it works and some of it doesn’t. You see certain product categories capture the public imagination and they sell tens of millions or hundreds of millions. You and I might have thought it would never work, but somebody does it and it’s a fantastic success. Do you have a phablet?