A new market share study released today paints a bullish picture for iPhone sales, saying that the Apple phone accounted for half of all U.S. phone activations in the fourth quarter of 2014.

Consumer Intelligence Research Partners surveyed 500 people who bought phones from October 1 through December 31, 2014, and found that one out of every two had purchased iPhones. Samsung phones accounted for 26 percent of sales, while LG phones accounted for 11 percent. 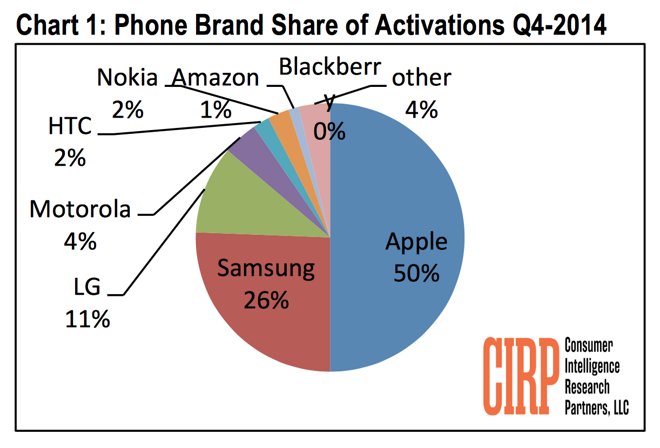 In the previous quarter iPhones accounted for only 28 percent of sales. CIRP interprets this to mean that lots of people were waiting for the release of the iPhone 6 to buy a new phone, and normal holiday season gift-buying probably helped too.

Another survey paints a somewhat less bullish picture. A new 451 Research study says that of people who plan to buy a new smartphone in the next 90 days, 56 percent say they’ll get an iPhone. That sounds good, but that number is down from 71 percent in September 2014. Meanwhile, 18 percent (up from 13 percent last September) say they’ll buy a Samsung.