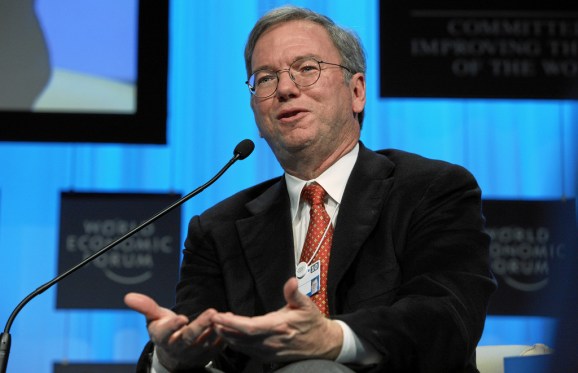 Speaking at the World Economic Forum, Google’s Eric Schmidt told a crowd at the annual elite vacation/conference that better Internet connectivity will solve most of the world’s major problems.

“Almost all of the problems we debate can be solved by more broadband connectivity,” said Schmidt, during a panel with Microsoft CEO Satya Nadella.

Schmidt reportedly told the crowd that blazing-fast internet solves a range of systemic issues from governance to education to human rights.

Given Schmidt’s and his fellow CEO’s wild optimism for better broadband, it’s no surprise that the major Internet firms are all investing in broadband projects, both In America and the developing world. For example, Google has its Project Loon to bring the wonders of the Internet to remote areas via floating balloons.

T-shirt enthusiast and Facebook CEO Mark Zuckerberg was recently down in South America to promote a new initiative to provide Internet for poor people in Colombia, part of his company’s broader effort to connect the entire world.

Microsoft-founder-turned-super-philanthropist Bill Gates is less impressed. He once called Facebook and Google’s charity-through-connectivity projects a “joke.”

“When you’re dying of malaria, I suppose you’ll look up and see that balloon, and I’m not sure how it’ll help you,” he said in 2013. In more recent interview with Steven Levy, he further explained,

It’s a tad ironic that on the panel, newly minted Microsoft chief Satya Nadella was amenable to Schmidt’s view, saying “there’s a consensus that low-cost bandwidth is a must.”

Interestingly enough, no one is talking about some of the potential short-term harms that come from increased broadband. A recent economic analysis found that in developed nations (Norway), increased broadband may exacerbate inequalities between low and high-skilled workers. This isn’t to say that we should cut off Internet access to poor neighborhoods, but we should be sensitive to the short-term impacts on local jobs.

Either way, Google and Facebook are going full steam ahead with their universal connectivity projects. So, we’ll all find out who is right soon enough.