App downloads set a new record for the third consecutive month in December, but the cost of acquiring loyal users also rose 20 percent from a year ago, according to data collected by mobile marketing tech firm Fiksu.

The results show that people are increasing their appetite for free iOS apps, but brand marketers are driving up the costs of acquiring those individuals by spending heavily during the holiday season. But while spending on overall apps was up, the cost of advertising mobile games actually dropped.

Fiksu said that its App Store competitive index, which tracks the average aggregate daily download volume of the top 200 free iOS apps, rose to 9.2 million in December, growing 14 percent from November and up 44 percent since last year. It was the third month in a row for a new high.

That’s good news for app makers and marketers. The Fiksu cost per loyal user Index (CPLU, which measures the cost of acquiring a user who opens an app three times) increased 33 percent from November to $2.10 in December, however. That was a 20 percent increase in costs year-over-year.

“As competition for users just continues to amp up in mobile, smart publishers are using mobile marketing automation solutions to drive deeper engagement — and monetization — with the users they get,” says VB Insight analyst John Koetsier. “Many of the top solutions enable automated one-to-one targeting, offers, and messaging … really a CRM-like experience at millions-of-users scale.”

December was a hot month for app marketing in part because of the launch of the iPhone 6 and iPhone 6 Plus by Apple. Advertiser demand outweighed the uptick in ad inventory, and that drove up prices, Fiksu said. 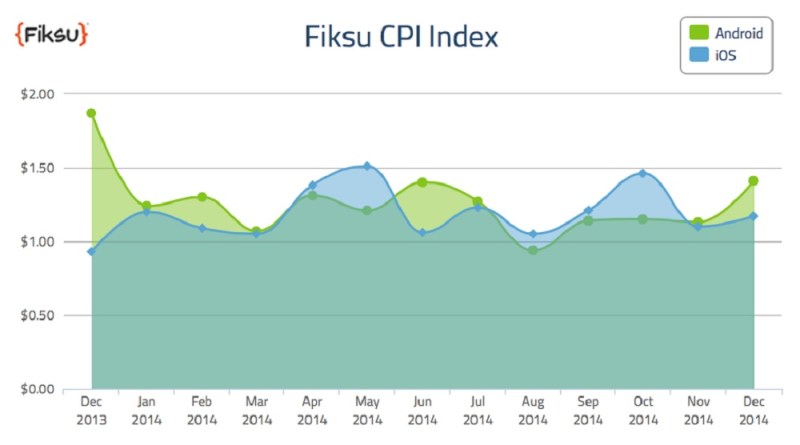 Above: Cost per install in December 2014.

The December cost per install index (CPI), which measures the cost per app install directly attributed to advertising, showed a big split in cost trends. CPIs for iOS and Android apps were up 42 percent and 47 percent respectively, but for games, the figures decreased 15 percent on iOS and dropped 6 percent on Android.

Fiksu said that means that top-tier brands spent heavily on their apps in the holidays, but some game publishers opted to limit their spending this year.

The Android cost per launch (CPL) Index, which tracks the cost to drive mobile app engagement, increased by 32 percent since November. Year-over-year, however, Android CPLs have been steadily decreasing, down 30 percent since last December. CPLs for games were essentially flat, but app CPLs were up 113 percent on Android and 57 percent on iOS.

“Reaching a new milestone of 9.2M app downloads — up over a million from last month — is an indicator of what we call the ‘the new reality of apps,’” said Micah Adler, CEO of Fiksu, in a statement. “Consumer demand across iOS and Android is rising, which draws significant attention from major brands who are putting cost pressure on the games and other mobile-first apps.” 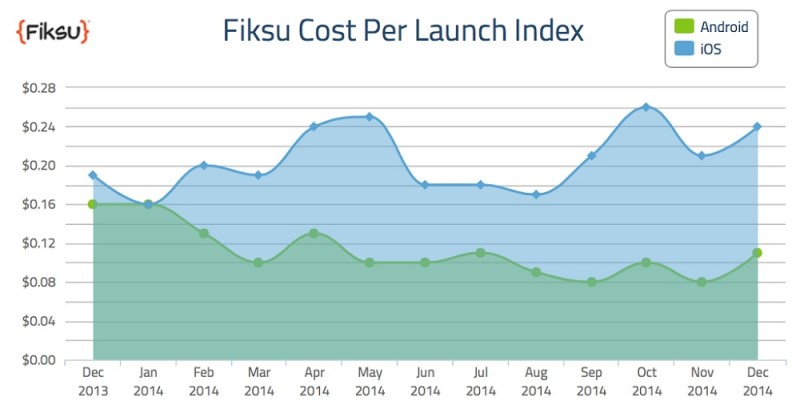 Above: Cost per launch in December 2014.

He added, “We expect these factors will not only elevate costs for marketers but also drive an evolution of marketing strategies. In 2015, just buying mobile ads won’t be enough to drive usage — app marketers will need robust strategies based on customer data and precision targeting to find the right users for their apps.” 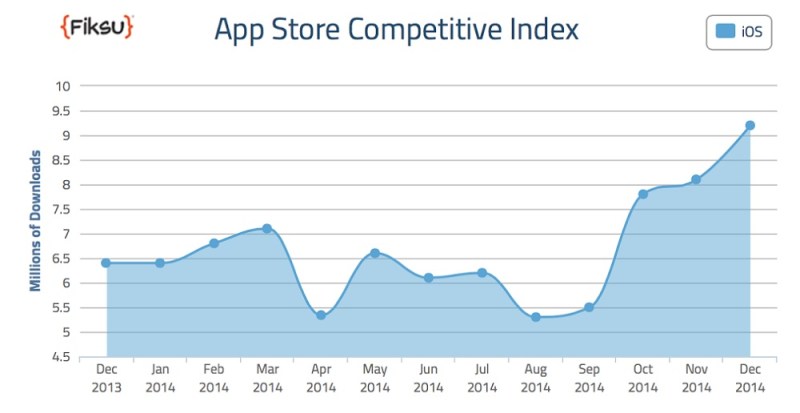