Above: Here’s an example of one of Max’s available choices. She can disrupt class by taking a selfie if she chooses.

Moris tells GamesBeat that each episode will have about 20 choices for the player to navigate. This leads to about 100 pathways across the full season, with all of these geared fully toward making each player’s experience unique, to make them feel like they’re living a life.

“It’s about feeling that the experience is unique. That can be done with very simple things,” Moris explains.

At the end of five episodes, after these 100 or so choices, the things one player’s Max experiences could be hugely different than what another player’s character goes through.

“In 95 percent of the people that play will not have [what you did], says Moris.” He notes the goal is to keep the game unique for each player without using branching. “I think that’s the best way today to tackle interactive, story-driven games.”

Even with some knowledge of how Life is Strange is being built, I found myself second guessing every decision while playing. One more notable crossroads had me doubling back four times, worried that my decision to aid a friend being bullied might cause trouble for us both down the road. Even the smallest situation could leave you wondering about future implications, and Max’s inner monologues and in-game prompts mess with your head even more. Maybe I should have been nicer, I wondered. Maybe I shouldn’t have messed with so many personal things in a friend’s dormitory room.

This constant consideration had me more engaged in this game than any I’ve played in some years. In just this one sitting, I found myself looking away from the screen many times to consider the future result of my decisions. Some of my choices stayed with me through the end of the day. 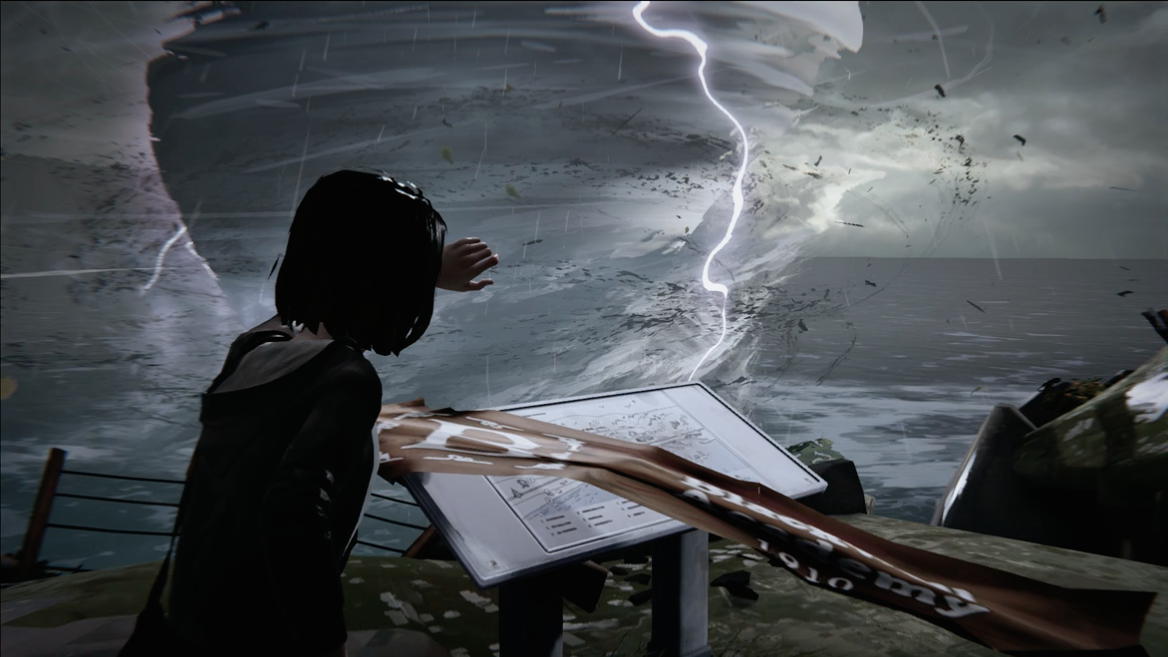 Above: This vision of Max’s future is how you know things will get worse down the road.

It kills me that the repercussions of my choices won’t be seen until later episodes, especially when you consider that Square Enix has spaced the releases of the five episodes six weeks apart from each other. Dontnod knew that they wanted to approach Life is Strange from an episodic standpoint from the very beginning.

“The first meeting on Life is Strange, which was code-named What If at the time, happened in April 2013,” says Moris. “The two things that came out of that first meeting were, one, the rewind, two, go episodic. Everything else came from there.”

“It’s really something we wanted to do,” he explains. “It’s not something that was tacked on to the recipe. I think it shows. Each episode feels as an episode, with a beginning, middle, and end. There is a sense of closure with each of these, and there will be a sense of closure on the season as well.”

Just one season is planned so far, but Moris says that more could follow if this one goes well.

Dontnod has created a potential benchmark title for interactive storytelling. In just one two-hour episode, I experienced smart humor, violence, loss, love, and friendship, all of which were conveyed through striking abstract artwork and outstanding vocal performances. And again, the time rewinding mechanic and the choices attached to it make for an incredibly engaging experience.

I’m very much looking forward to the next episode.