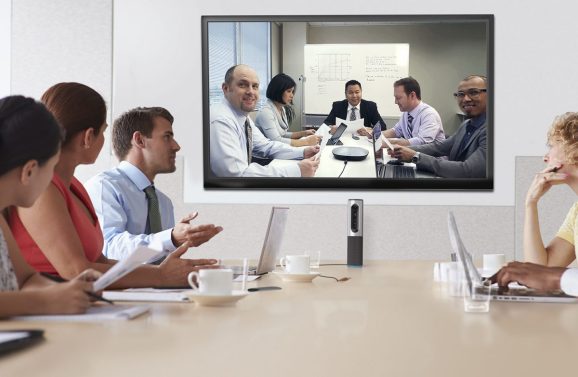 Not that long ago, dependable video-conferencing was a high-end service available only at large companies or as a special service.

Now, it’s a standard business tool. And peripheral maker Logitech is upping its stake in the category today, announcing a portable 1080p all-in-one device that is designed to play nice with everyone.

The Logitech ConferenceCam Connect, targeted at both enterprises and small-to-medium-sized businesses, links to Macs, Window computers, or Chromebooks via USB. It works with any videoconferencing software, although it’s optimized for Microsoft Lync 2013 and Cisco Jabber, and it’s WebEx-compatible and Skype-certified. A HDMI connection enables display on an HDTV, and it has a USB/Bluetooth speakerphone.

Before 2012, products group manager Ziva Nissan told me, users largely had the choice between a large telepresence system or “a desktop webcam that people huddled around.” At that time, Logitech brought out its nonportable BCC950 ConferenceCam, of which the new device is the next generation.

In 2009, Logitech bought Lifesize, which offers a large-scale videoconferencing cloud for enterprises. Last January, the company announced its nonportable ConferenceCam CC3000e, which sells for twice the ConferenceCam Connect’s $500 price.

Our remote videocall was conducted using the new device. The video quality looked decent, and the somewhat boomy audio, Nissan said, was due to the acoustics of the conference room she was in.

The unit also incorporates a feature that you can expect will become standard in video-conferencing — the capability to walk into a conference room and quickly stream files from your Android or Windows smartphone.

Using Miracast technology, the ConferenceCam automatically mirrors presentations, spreadsheets, videos, or websites brought up on the screen of a paired smartphone.

Nissan noted that iOS doesn’t support Miracast technology, and “[Apple’s] Airplay is not an open API.”

Trying to see everyone in the other room can be a challenge in videoconferencing. The ConferenceCam, which is intended for groups of up to six people, provides a 90-degree field of view with digital pan and tilt, mechanical tilt control, and Zeiss optics. There’s 360-degree sound, and Logitech says users can hear at conversational levels within a 12-foot diameter.

Logitech reports that there are about 21 million “huddle rooms” worldwide, where company teams huddle for meetings — but that less than a million are video-enabled.

When not near an outlet, the battery on the $500 device is designed to support up to three hours of video-conferencing or as much as 15 hours of audio-only conferencing.

Nissan said that “we don’t have a true competitor to this device,” one that is portable and allows a user to simply plug and play. She pointed to similar quality on more expensive units from Polycom or Cisco. Google’s all-in-one videoconference device Chromebox, she noted, “uses a Logitech camera [and they are] more of a partner.”