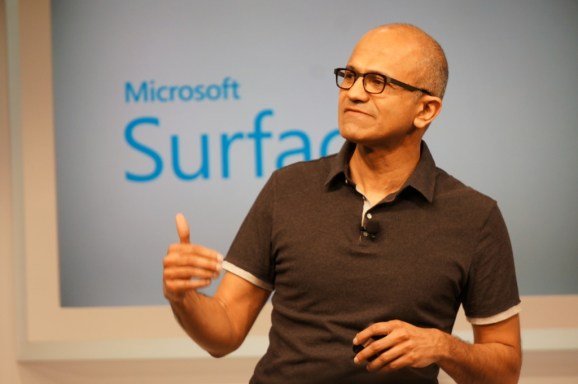 Microsoft closed out 2014 with a solid quarter, going beyond analysts’ expectations with $26.5 billion in revenue and meeting estimates for profit with $5.86 billion, or 71 cents per share.

Analysts were expecting 71 cents per share in earnings and $26.3 billion in revenue for the quarter, which Microsoft registers as the second quarter of its fiscal year 2015.

Revenue for the quarter is up 7.9 percent year over year, compared with $24.5 billion for the second quarter of fiscal year 2014, according to today’s earnings statement.

Microsoft stock was down more than 2 percent immediately following the earnings release.

This marks the first holiday season with Satya Nadella functioning as Microsoft’s chief executive. It could serve as a benchmark for him for years to come. Nadella replaced Steve Ballmer as chief executive of the company in February 2014.

And more good things could be on the way for Microsoft later in 2015, with the release of Windows 10 and the Windows Holographic augmented-reality system expected this fall, if not sooner.

This time around, Microsoft’s commercial cloud revenue was up 114 percent, with gains in Office 365, the Microsoft Azure public cloud, and Dynamics CRM Online, Microsoft said in a statement.

Highlights also came in the mobile department, with $1.1 billion in Surface-related revenue and more than 10 million Lumia smartphones sold in the quarter.

Xbox sales in the quarter were down year over year.