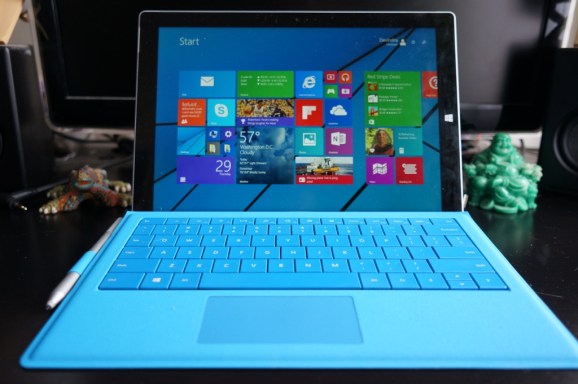 As part of the company’s latest quarterly earnings announcement, Microsoft today revealed Surface revenue increased to $1.1 billion in Q2 2015, driven mainly by Surface Pro 3 and its accessories. The company also revealed phone hardware revenue of $2.3 billion, thanks to 10.5 million Lumia units sold in the quarter.

In Q2 2014, Microsoft reported $893 million in Surface revenue, meaning the figure has slightly increased (up 24 percent, to be exact). More importantly, this is the first quarter that the Surface line has generated more than $1 billion. The company started this fiscal year with $908 million in Surface quarterly revenue, meaning it has already sold $2 billion’s worth of Surface products in the first half of its fiscal year.

Over $1 billion in Surface sales is a lot for a software company that only recently got serious about making its own computers, but we still don’t know the exact number of Surfaces the company is selling. That’s because Microsoft lumps together accessories and older Surface devices along with the Surface Pro 3, which itself has models ranging from $800 to $1,950. That said, it couldn’t have sold much more than a million units, which is a long way off from market leader Apple and its 12.3 million iPads or even its 5.5 million Macs sold last quarter. Microsoft has quite a long way to go before it is a dominant force as a tablet or PC maker.

“We again saw enthusiasm and demand around our cloud offerings like Office 365, Dynamics CRM Online and Azure, as well as Surface Pro 3,” Kevin Turner, chief operating officer at Microsoft, said in a statement. “Our sales engagement worldwide continues to focus on helping customers and partners transition to the cloud and navigate the shifting product mix related to our services and solutions.”

Last quarter, Microsoft sold 9.3 million Lumia smartphones, a new record at the time. In Q2 2015, the company set another new record, up another 12.9 percent to break the 10-million mark.

If breaking its own Lumia sales record every quarter becomes a trend, the company could indeed pave a solid base for its Windows 10 release later this year. The company said the unit growth is thanks to demand for its “affordable smartphones,” meaning its low-end devices.

That said, as you can see in the slide above, the company sold fewer feature phones. Microsoft needs to not only win over existing Android and iOS smartphone users to its platform, but ensure it is converting owners of feature phones to Windows.

Microsoft may still be a software company at heart, but its hardware results are becoming increasingly important. As we saw last week at the company’s Windows 10 event, Redmond has a lot up its sleeve.