The Xbox App for Windows 10 provides a peek at a future in which cross-platform gaming might actually become a reality. But for now, it mostly provides a fancy look at your Xbox One dashboard.

I spent the weekend testing the Windows 10 Pro Technical Preview, which contains what you can charitably call a beta version of the app. The Xbox App is not the same as the Xbox Smartglass App, but has been available for months for Windows phones and tablets, and which is also (confusingly) included in the preview version of Windows 10.

The Xbox App is much more ambitious. Microsoft plans to build it into every copy of Windows 10, regardless of platform. Eventually, it will give you the capability to stream games from your Xbox One to your PC or tablet and will provide the platform for developers to enable PC and Xbox One combined play. For now, at least in theory, it gives you access to nearly every other facet of the Xbox One dashboard: your friends list, your apps, your activity list, your messages, your achievements, and the like.

Many of those capabilities lead to dead ends in this build. When it comes to drawing information from your Xbox One to your desktop, the app performs extremely well. In general, you can’t yet send information back the other direction, even to change the avatar on your profile. Click here for a list of the features actually included in this build.

You can’t stream games from your Xbox One yet, and you can’t play against someone across platforms, though both features have been shown off by Microsoft in other internal builds. 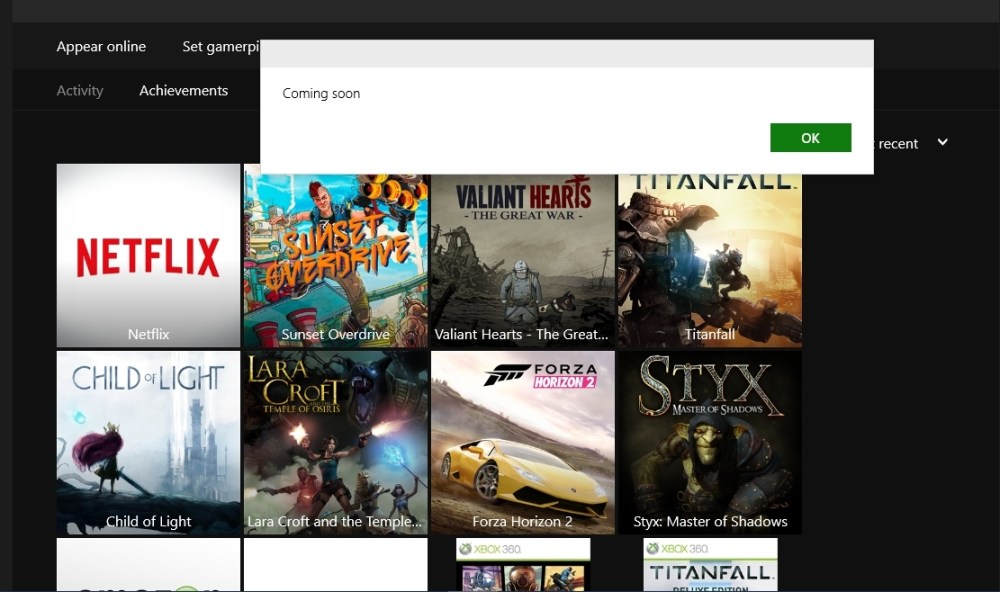 Above: Things look great in the Xbox App, until you start clicking on menu items.

If you have an existing Windows 7 or Windows 8 computer and are willing to risk changing it to Windows 10, installation of the preview build is likely to be relatively smooth, requiring just a Windows Update download and a series of setup windows. That doesn’t mean that it’s going to run perfectly or that it will be compatible with all your software. This is a beta build of an operating system, and errors are going to happen.

Reversing course and going back to your old Win 7/8 system will be very difficult, requiring a complete strip-and-reload of your operating system, a task that is not for the faint-hearted.

I installed my version of Windows 10 from scratch on a clean secondary hard drive to avoid corrupting my primary Windows installation, which was tricky and not fully supported by the new OS. Microsoft does make a bootable disc image available to install Windows 10, but having that file isn’t enough to create a bootable CD or USB stick; you’ll need a utility (either Microsoft’s own or a third-party) to do that, and I went through two before finding one that would play nice with Win10.

If that previous sentence reads like gobbledygook to you, I would definitely not recommend installing the Windows 10 preview on a fresh drive yourself.

Even after installation, Windows 10 posed a number of challenges. It didn’t recognize all of my hardware, including the motherboard, so basic functions — like telling the PC to sleep, or detecting accessories — didn’t work without a lot of tinkering with drivers. And Win10, like all good Windows installs, wants to take over your system.

Convincing it that you don’t want to always boot your PC from that drive where you installed it takes some persuading, and Windows Boot Manager doesn’t appear to exist in this build. (Amusingly, the original 20-year-old Windows Control Panel to fix your system settings does, if you dig deep enough.)

But once installed, Win10 is surprisingly resilient and stable for gaming, at least in my weekend-long test. I installed a few old and new games and dashboards on that drive (digital store/game service Steam, turn-based strategy tilt Civilization V, the massive online role-playing game World of Warcraft, RPG Divinity: Original Sin, first-person puzzler The Talos Principle, and a couple of yet-to-be-released previews), and all of them worked without bugs or crashes, which surprised me this early in the Windows 10 preview cycle.

Bottom line: It was hard, but not as rough as I expected, to get it up and running smoothly on my system.

An odd touch of lag for games in Windows 10

The Win10 versions of my games lagged a bit behind the older Windows copies, an experience other players with the build said they saw as well. It remains to be seen how much of that minor latency is directly tied to planned future features like the ability to capture your last 30 seconds of gaming as a film clip.

But I attribute some of the slight down-tick in frames-per-second to the fact that I used compatible-but-not-optimal video drivers. Win10 recognized my aging GeForce GTX 660 videocard handily, but it failed to see the second monitor attached to it, so back to the Windows 7/8 Nvidia drivers I went.

That meant my drivers weren’t taking advantage of DirectX 12, Microsoft’s new collection of commands that programs can call on to render graphics and execute gameplay. (To be fair, my games aren’t either, of course.) If you check out Spencer’s video at about the 7:30 mark, you’ll see a demonstration of a scene rendering using the same hardware with DX11 versus DX12. He suggests that not only does it render much more, much more quickly, but that it requires half the power consumption of DX11.

Most recent video cards will be compatible with DX12: Nvidia’s 400 series and better, AMD’s HD 7000 or better, and Intel Haswell-based video processors.

While not part of the Xbox App, Cortana acts as a reminder of how tied to gaming Microsoft has become.

Cortana — familiar to all players of Halo games, where she is Master Chief’s virtual adviser, spiritual companion, and suspected weekend masseuse — doesn’t have her full powers in this Windows 10 build, but she’s there to search for you as an intelligent assistant (think Apple’s Siri or Google Now). I don’t have a Windows phone or tablet, so this was my first experience getting to know Cortana outside of a Halo context. I loved everything about her except the fact that I had to use Bing to search the web. Sigh.