Wooga’s latest title, Agent Alice, sure reminds me of console-game production. This kind of title signals a big change for the mobile space, which will separate into a small group of winners and a much larger pack of losers.

The hidden-object adventure game for mobile devices just debuted after two years of development. It was built by a core team of 15 people, but more than 80 worked on it over the course of the project. And at the end of February, Berlin-based Wooga will launch the Agent Alice with the largest marketing budget it has ever had — somewhere in the millions of dollars.

Jens Begemann, chief executive of Wooga, told me in a conversation that this is what it takes to succeed in the modern mobile-game business. Agent Alice will launch as a free-to-play release with eight episodes, but Wooga’s team will produce a new episode every Friday. 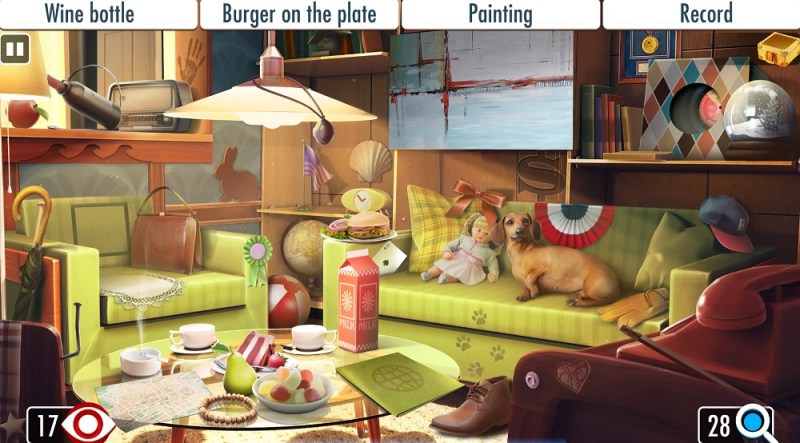 Above: A screenshot from Agent Alice.

GamesBeat: Tell us about the making of Agent Alice.

Jens Begemann: Agent Alice is basically the successor, but also the reinvention, of our most successful game of the moment, Pearl’s Peril. It’s a hidden-object game. Everything we learned there we’re taking to Agent Alice. At the same time, we’re trying to reinvent the genre for mobile.

Hidden-object games have been huge on the PC. Big Fish and other companies have seen a lot of success there. The demographic is mostly women, typically 40-plus years old. Pearl’s Peril has been very big on Facebook, always among the top Facebook games, but it’s never been big mobile. That’s what we’re trying to change.

We have very high production values and attention to detail. The game is designed particularly for mobile. The hidden-object scenes and the puzzle scenes are designed for a small screen. The play sessions are short, so you can come back a few times a day. It’s extremely story-driven. We tried to take inspiration from TV, where there’s a new episode every week. … We’ll do a big launch at the end of February with the highest launch budget we’ve ever had in terms of marketing. We’re spending millions of dollars on launch weekend. We’ve produced a trailer.

GamesBeat: Is this one of those 40 prototype ideas you were talking about a while ago?

GamesBeat: What did you find from doing all that iteration and study of the genre?

Begemann: A few very interesting things. One is that this demographic — women 40 and older — is underserved on the app stores. You see lots of action and strategy games geared toward men. But for women 40 and older we have puzzle games — Candy Crush or Jelly Splash — and not much besides that. If you look at what this audience watches on TV, it’s drama, things like Downton Abbey. Not much on mobile is story driven or character driven. That’s what we want to create.

The Agent Alice team is a very international team. At Wooga, we now employ more than 40 nationalities. That’s one key thing we’ve found. The second is that this is all about content. If you think about it, every episode is like a TV episode. Most of these hidden-object games that have existed so far, you start playing them, and after a week you’re through. That’s it.

We want to avoid that. This will be endless like a TV series. Every week, predictably, there will be a new episode. That’s a crazy amount of effort. We have a small team internally, but we have people doing the artwork externally, and then we have localization. In total, 80 people work every week on Agent Alice to create the new episodes. That took us years to build up with Pearl’s Peril. Now we’ve done it, it works, and we’ll apply it to Agent Alice.

GamesBeat: Is each episode produced by the same team or do you have different teams working in tandem?

Begemann: The core is the same. Pearl’s Peril came out early in 2013. Many of the key people — I’d say about two-thirds of the team — moved on to start Agent Alice. Pearl’s Peril still has a live team. We have many new people there who continue to improve the game. But we took all of those learnings and the key people from the team and moved them to Agent Alice. Then we added new ones.

GamesBeat: How long does it take you get to something like 80 people?

Begemann: Out of those 80, about 30 are internal. The others are external. We have partners in Canada, Ukraine, and India who help us with artwork. The ramp up to 80 was around the late summer or early autumn — September or October — when we started making this weekly content. Until roughly October, it was about the core of the game, and the team was small, about 10 or 12 people. Now we’ve scaled up. Going forward, we’re launching with eight episodes, and every week, there will be a new one.

Potentially you could play for years. That’s what we see in Pearl’s Peril. Every week, people wait for the new episode to arrive.