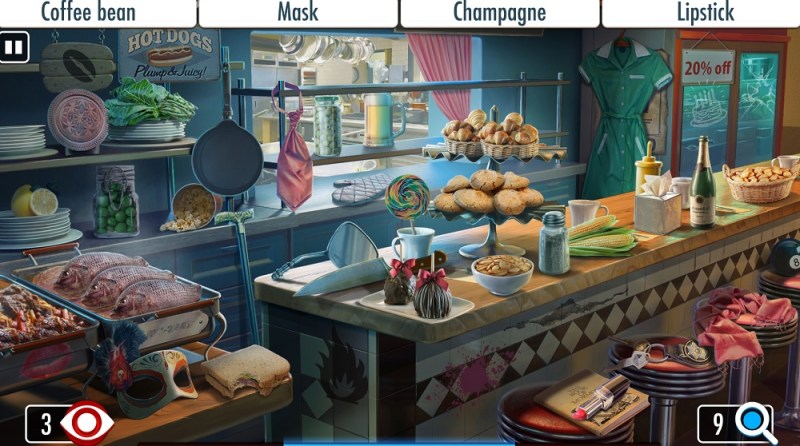 Above: Another screenshot from Agent Alice.

GamesBeat: This audience seems like it’s close to what your core audience has always been.

Begemann: That’s true. We’ve always had 70 percent women, 30 percent men. With Agent Alice it’s close to that. It’s a little bit older and a bit more toward women. We expect 80 percent women for Agent Alice. While typically we talk about average users being over 30, here I think the average user will be over 40, closer to 45. It’s a new audience of people who haven’t played much in the past. Maybe they’ve played downloadable PC games, but on mobile, they may have only played puzzle games.

GamesBeat: I wonder if there’s been a rise and fall for this genre in social gaming. Have you studied that?

Begemann: To me it seems that maybe it’s more a specific thing about that title or some other titles. For us, with Pearl’s Peril, we still have seven-digit daily active users on Facebook. The key, what you have to achieve, is it has to have very high production values. Story is incredibly important, a rich story with different characters. People fall in love and die and all of those things. The third factor is content. Many of these other hidden object games, people simply ran out of content. When there’s no more content, you stop playing.

If you think of a strategy game that’s built around [player versus player], the users are the content, the people attacking each other. This kind of game is about content. You have to deliver content every week. If you stop delivering content, people play to the end of the content and stop. It took us years to build up this content pipeline. Maybe others weren’t willing to make that investment. 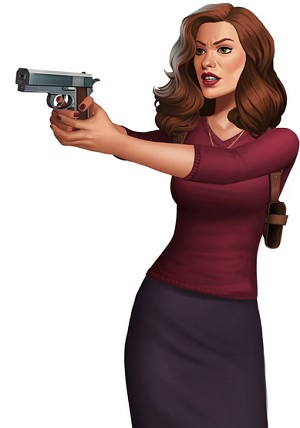 Above: Artwork from Agent Alice.

GamesBeat: Weekly has turned out to be the right interval?

Begemann: Yeah, for us. I’m very happy about last year. Agent Alice is our first new game in more than a year now. Despite that, even though we haven’t launched so much recently, 2014 saw 30 percent more revenue than 2013 and four times the profit. We’ve been profitable for three years, since early 2012. Every year, profit has risen. Revenue has risen. I’m very optimistic.

The hidden-object genre only works with significant investment. You can’t just copy some other title. That doesn’t work.

GamesBeat: How many employees do you have now?

Begemann: We have 270. That’s pretty stable. I don’t want to grow much. It’s a good size. Obviously, being very profitable, we could hire many more, but we feel we’re at a good size. We can make all the investments we want to make by ourselves. We have a high cash balance. With this headcount, we’re big enough to work on many projects in parallel and make bold bets. At the same time, it’s small enough that everyone can be in one office. We can share learnings between teams. It works well.

GamesBeat: It’s interesting comparing notes on Supercell. They have only 150 people. Fifteen of them work on Clash of Clans. They outsource a lot as well.

Begemann: For them, it’s less about content. The core team of Agent Alice is also exactly 15. Everything else on top of that is content and localization. If you look at the total of 80, it’s mostly external, and everything but those 15 — 15 is kind of a magic number — is content and localization into 12 languages. I know that they have a huge customer care operation that’s external, hundreds of people there. Really, though, you’re more productive if you have small teams.

GamesBeat: Is there a timer putting a limit on how long you can take to solve the puzzle?

Begemann: You get more points if you work it out faster, and so you progress faster. You have your first star there. Now you examine these strange lines, and the story continues. Crosby here is your partner. You’ve discovered a new scene now, backstage. You can see all of this artwork, beautifully done. The resolution is higher than full HD. Even on the highest-resolution tablet it’ll be at native resolution.

Traditionally, hidden-object games on mobile have always used pinch to zoom. You had to zoom in to play. This is perfectly playable on the phone. We have a very big phone here, but even on the four-inch iPhone 5, it’s very playable. No zooming needed.

One thing that’s interesting is how we design smartphone and tablet at the same time. If we go to the same scene on the tablet here, what you’ll see is that we show more content. Here, the scene ends at this lantern. There’s more content on the side. Here it ends over there with that chair. Likewise, we show a bit more content on the top. The content is dynamically adapted to the devices, which you have to do in this day and age.

We’re quite proud of the production values. This sort of thing isn’t just at the beginning of the game. It’s at that level of production value throughout. Every Friday it looks like this.