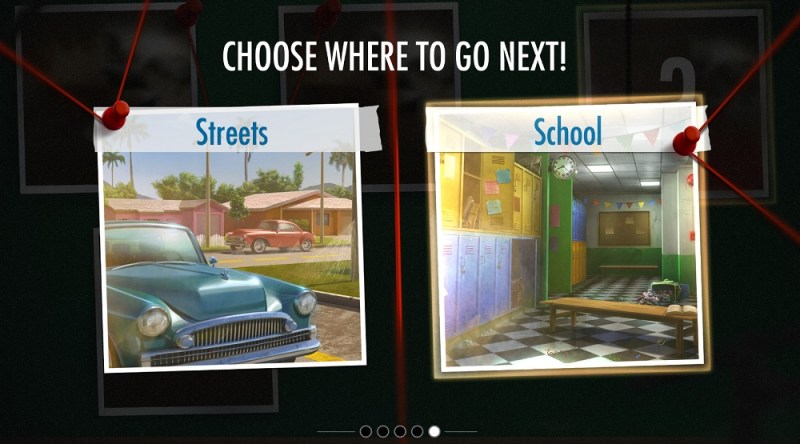 Above: Agent Alice is a new project from Wooga.

GamesBeat: Are hidden-object games a full-scale category now on mobile?

Begemann: I’m surprised there’s so little. There’s a game based on the CSI brand, the TV series, I think published by Ubisoft. It seems to be doing OK-ish. There’s a game from France called Criminal Case that started on Facebook, and it’s doing OK as well. Zynga tried it, but I don’t think they have any active games. That’s the key thing. The whole category is underdeveloped. On the PC, around 10 years ago, whole businesses were built on that. Big Fish Games, with hundreds of people, their main genre was hidden-object games.

Maybe there’s so little because the investment is so big. If you’re a small shop, maybe 10 people, you can create the core of the game, but you can’t create enough content. To create content at this scale, you have to invest millions, if you want to get to this level of quality and keep doing it. If someone is extremely quick, they may consume our weekly content after three days or so. But then, they know that next Friday they can tune back in. We’ve learned that from TV. We do so many things on a weekly schedule — weekly meetings at work, that kind of thing. That’s what we take advantage of.

We proved all that out with Pearl’s Peril, but Pearl’s Peril was only designed for the big screen. It’s only available on Facebook and iPad. It was never on iPhone or Android because the big content doesn’t work well on the small screen. With that, plus all the improvements and the high production values, we think we’ve gotten it right this time.

GamesBeat: Is anything else interesting going on in the industry from your point of view?

Begemann: The key thing for me is how much everything is concentrating around hits. My estimate is that we have about a thousand new games a week, and very few of them have positive ROI. The vast majority of games launching today don’t make back their costs. I’d say the rate is much lower than movies. In movies, you have a certain rate of projects that make money versus those that lose. The vast majority of games make very little money, and it’s impossible to invest in marketing.

Those hits that make it, though, are so huge that they can finance everything else. That’s the approach we have with our hit filter. We work on lots of ideas. If you have something good, you should stop. Good isn’t good enough. Only great things make sense.

Above: More artwork from Agent Alice.

GamesBeat: It’s very different from the old days, where the philosophy was to have a large portfolio. If you were working on a game, you’d just publish it and see what happens.

Begemann: For us it’s radically different. We only focus on potential hits. Everything else we stop in between because there’s no point. I see that more and more.

That has lots of consequences. If you embrace that model, you should stop most games during development. When you launch, you should double down. We’ll see game launches on mobile that are much more like a console launch. As I said, we’ll spend millions of dollars on advertising to launch and thereafter. We’ll do a launch event in London with press and partners. We’re publishing a trailer and behind-the-scenes videos about making the game. A professional crew has filmed the team as they made the game. There’s so much more effort happening toward the launch. Before, you just said, “The game is done. Let’s put it out.” Now there’s a much bigger effort behind it.

GamesBeat: How many platforms do you eventually get to?

Begemann: The focus for us is clearly on iOS and Android. The game is developed in Unity. Technically, we could publish to many more platforms, but we feel that with iOS and Android, you cover so much. That’s what we’ll focus on at launch. Maybe later we will bring it to other platforms, but all of our plans so far are around those two. It’s a same-day launch for both.

Begemann: We’re not sure. All of our new games are designed for smartphone first. Many other companies are tablet first. We’re definitely smartphone first because there are so many more smartphones than tablets. If you design for a five-inch screen, for touch, and for a mobile session, sometimes that doesn’t translate so well to other platforms.

We think that by designing for mobile, we can make better mobile games. You just saw the puzzle that was about shooting. There are other puzzles where you need to take fingerprints, which is about rubbing the screen and applying fingerprint powder. You do that with your finger. It’s more fun than using a mouse. This is also designed around a two-minute to five-minute session, around three minutes on average. Other platforms have other session patterns.

GamesBeat: How is Berlin doing for game companies?

Begemann: Berlin is a big startup hub in Europe now. There was a study published a week ago showing that in Europe, the two leading cities for venture-capital investment are London and Berlin. In terms of capital invested, Berlin is number one, but in terms of deals done, London is just slightly ahead. Five years ago, Berlin was 15th in Europe and now it’s one or two.

As far as games, it’s not yet a huge games hub. It’s starting to become one. It’s definitely a technology and startup hub. There are now maybe five sizable game companies there. King has a Berlin office. Lots of German and European companies have headquarters and offices there. It’s not yet a global games hub. But with startups, it’s further along, and it’s growing very fast.