Microsoft Research staff members have built an impressive new query-processing engine for performing big data analytics. Called Trill — a reference to “a trillion events per day” — the engine enables programmers to very quickly get results from queries on large piles of data.

And Trill comes in the form of a .NET library, so it’s easy for .NET applications to tap the tool.

The beauty of Trill is its speed relative to other streaming analytics systems. Trill “can process data at two to four orders of magnitude faster than today’s streaming engines,” George Thomas, Jr. of Microsoft Research wrote in a blog post about Trill today.

Trill, in all of its formidable capability, is Microsoft’s latest challenge to web companies like Amazon and Google, which process large swaths of data and have opened up their own tools for others to use as cloud services.

It’s unclear if the tool will be released under an open-source license. Microsoft last year began that process for .NET itself.

But Trill is implemented inside the Azure Stream Analytics service, which is currently available under public preview.

It’s also now powering Bing Ads, allowing customers to see how ads perform in less than an hour, as opposed to four hours prior to the incorporation of Trill, Robbie Devine, program manager on the Bing Ads Platform, wrote in a blog post.

Trill appears to have advantages over open-source tools like Storm and Shark, as well as Microsoft’s own StreamInsight platform for complex event processing. 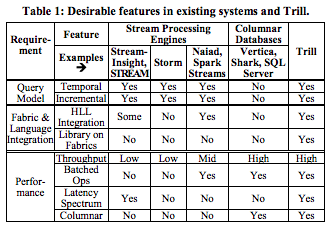 Above: Trill vs. existing tools.

To learn more about Trill, check out the academic paper (PDF) about it.