Twitter is launching new group-messaging and video features today, as it continues its push to increase mind share among the social networking masses.

While this launch was partly expected, given Twitter CFO Anthony Noto’s previous hints, among other clues, the company is finally rolling out what could prove to be two huge features for the platform.

Crucially, while the group chat feature lets a user start a private chat with any of their followers, all participants don’t need to follow each other. The group creator just indicates who should be involved — up to 20 people — and the participants receive a notification.

It will be interesting to see how this one works in the wild — it seems you could be added to a group chat without any say, perhaps leading to some awkward online interactions.

But perhaps just as notable is Twitter taking aim at the big guns in the online video space with a new feature that lets you shoot and share video directly from the mobile app. 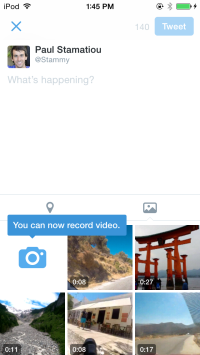 Twitter has already made a huge success of its Vine video service, launched two years ago, which has made 6-second looping videos something of an art form. But with Instagram getting into the video realm, and users unable to embed their creations in a tweet due to restrictions put in place by Instagram, and Facebook itself letting users upload videos directly, it was only a matter of time before Twitter followed suit.

Now you’ll be able to shoot, edit, and share video clips directly from within the Twitter app on Android and iOS. It’s an obvious move in many ways, and it greatly expands a message beyond its 140-character limit.

Twitter is sticking to the short form though, restricting video clips to 30-seconds. However, those on iOS will also be able to edit and upload videos from their camera roll — this will be available to Android users soon too.

Group messaging should be available to everyone imminently, though the video-capture feature will be slowly rolling out over the coming days. Meanwhile, here’s what the new video feature looks like when embedded in a tweet.

Check out my Twitter video #Oscar exclusive! I gots me a scoop! pic.twitter.com/SGQ3oJHDqZ