Amazon is a technology company, not just a shopping company. At least that’s how Jeff Bezos sees it. And the next adventure Amazon may have in mind is becoming your mobile service provider.

Sources have told VentureBeat for some time now of chatter within the wireless industry about Amazon becoming a network operator, and it may actually happen.

In case you haven’t noticed, Bezos is an audacious character, and he’s got the money to try new initiatives that are ambitious to the point of being a little nutso.

Case in point, of course, is the Fire phone. Nobody expected that Amazon would want to make a phone — much less build the thing by itself — without any existing experience in phone making. But it did.

Any technology that funnels into the shopping business — directly or indirectly — is fair game for Bezos.

Now, with the news that Amazon has gotten into the email business with WorkMail, it’s a good time to look at where the company might go next.

Google is rumored to be looking seriously at becoming a cellular phone service provider, or MVNO (mobile virtual network operator). The move would ostensibly be aimed at providing an alternative Internet connection over which to use Google search and other productivity services. 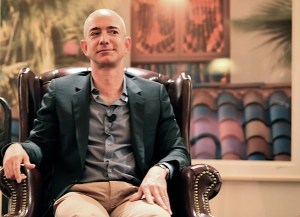 Above: What will Amazon CEO Jeff Bezos do next?

But Amazon arguably has a more direct reason to become an MVNO.

At the announcement of the Fire, many were disappointed that the innovations stopped at the outside edges of the phone. You got some cool features (Firefly, 3D, etc.), but you still had to pay AT&T the same old high rates for the same old traditional cellular contract.

The first Fire phone was a flop. Could selling the next Fire phone in tandem with a matching cellular service lead to a better result? Maybe.

An “Amazon Prime mobile” service would use the Fire phone as its preferred device. Amazon might even be able to just give the phone away for free, which would put a shopping tool in the hands of most subscribers, and then charge a monthly rate for cellular service.

Amazon would try its best to create features that integrate the phone and the network service to enable the mobile shopping experience. For instance, the mobile service could be tuned to give priority to data packets running to and from a Fire phone that’s using the Firefly product recognition feature for shopping.

More importantly to users, Amazon might give credits to mobile users when they use their phones for shopping. Amazon might tell customers up front that anytime they are using mobile data to browse Amazon or its partners’ sites, the data service is free. That is, those sessions would not subtract from the customer’s monthly data allotment.

An Amazon mobile service would almost certainly use carrier billing to bill for certain products or services. A customer’s digital (movies, music, etc.) and physical purchases could be billed right alongside the customer’s mobile service every month.

And Amazon might offer discounts on certain products that are purchased using the Fire phone and billed in the mobile service billing system.

To top it all off, Amazon could collect a mountain of data on users’ mobile shopping habits. They could learn where, when, and under what conditions customers purchase various types of products or services on a mobile device.

Amazon’s main goal is to remove friction points from the shopping experience, and to enable people to buy things anytime they get the urge. It’s not hard to see how an Amazon mobile network could help.