Amazon.com announced its earnings for the fourth quarter of 2014 today, and its Amazon Web Services (AWS) division, the top public cloud around, appears to be growing more than it has in recent quarters.

Amazon does not break out Amazon Web Services revenue on its own. But Amazon’s “other” revenue for North America — including AWS as well as advertising services and co-branded credit card agreements — came in at $1.67 billion for the fourth quarter of 2014.

The year-to-year revenue growth rate for that figure is 43 percent. 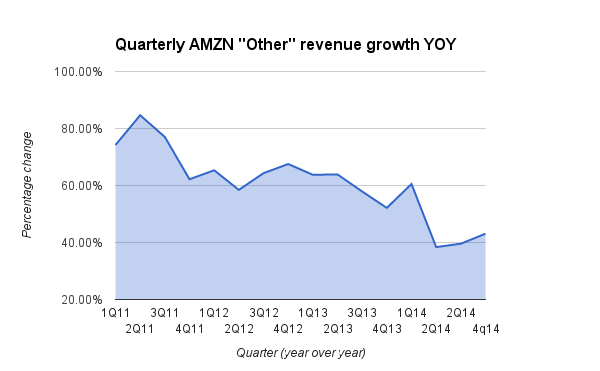 Above: Quarterly AMZN “Other” revenue growth year over year

The performance follows two consecutive quarters of growth rates that were slightly lower than that, and considerably lower than they were in previous years.

AWS competes with public clouds from companies like Google and Microsoft. Microsoft’s Azure revenue grew in the final quarter of 2014, Microsoft said earlier this week.

As for AWS, its revenue appears to have hit a new high — which happens almost every quarter. 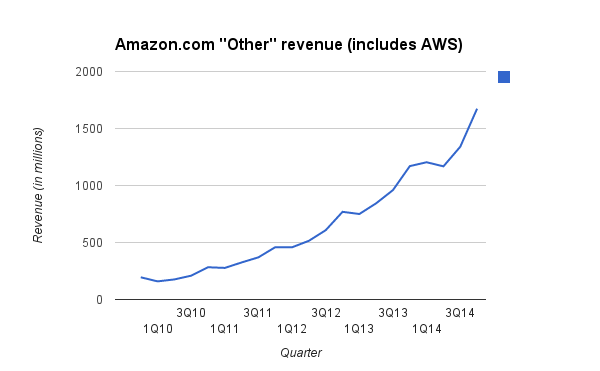 Above: Amazon.com “Other” revenue (includes AWS) for Q414

In its earnings statement today Amazon bragged about all of the announcements it made in 2014 and provided some insight into “usage growth”:

With over 515 significant service and feature releases in 2014 (up more than 80% year-over-year), and over one million active customers, Amazon Web Services (AWS) continues to grow strongly, with usage growth close to 90% year-over-year for the fourth quarter.

In the fourth quarter, AWS made a slew of announcements, perhaps most importantly the Lambda service, which could prove to be a very big deal in the cloud infrastructure market in the future.

Also in the quarter, Amazon announced the Aurora database engine, the CodePipeline continuous-integration tool, the EC2 Container Service, new C4 instances (which are virtual portions of physical servers), and, of course, price cuts.