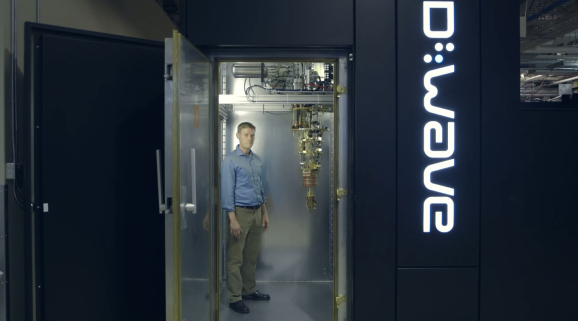 A D-Wave machine at the Quantum AI Lab

D-Wave Systems, a company building what it calls quantum computers, is announcing today that it has taken on around $23.1 million, or $29 million in Canadian dollars, in additional funding.

Burnaby, British-Columbia-based D-Wave claims its hardware is capable of quantum computing. In contrast to classical computers, which deal in bits, each of which carries a value of either zero or one, quantum systems work with quantum bits, or qubits, each of which can be zero or one or both. The superposition of these qubits can allow great numbers of computations to be performed simultaneously, making a quantum computer highly desirable for certain types of processes.

Some researchers have wondered if D-Wave’s machines really do achieve a quantum state. Even so, D-Wave has landed some prominent deals in the past couple of years. In 2013, Lockheed Martin, D-Wave’s first customer, shelled out for an upgrade to a D-Wave Two computer. That same year, Google and NASA announced that they had picked up a D-Wave Two system for a joint project, the Quantum Artificial Intelligence Lab, at NASA’s Ames Research Center.

The new money will help “accelerate development of D-Wave’s quantum hardware and software and expand the software application ecosystem,” according to a statement from the company. Meanwhile, Microsoft has been incubating a quantum computing initiative of its own on the University of California, Santa Barbara campus.

D-Wave, for its part, started in 1999 and is based in Burnaby, British Columbia. To date the company has raised $138.7 million, or $174 million in Canadian dollars.

In-Q-Tel and Bezos Expeditions, among others, have previously backed D-Wave. This time around, D-Wave is not disclosing the identity of the “large institutional investor” dropping cash into the company for the first time.