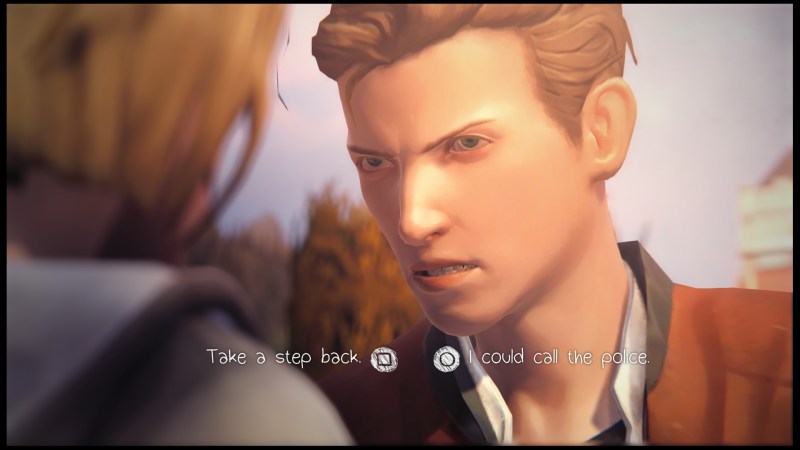 Above: How you threaten this a-hole may set the tone for the rest of the game. Or it could just be flavor text. Either way, the choice is yours.

The visuals are inconsistent and occasionally downright ugly

Some of the characters in Life Is Strange are just ugly. And not because the developers want them to look like unpleasant people, but also because they are just weird-looking. It runs on the Unreal graphics engine, and while this does not lead to a bunch of Batman: Arkham Asylum-style universal beefcakes with no necks, it does mean that a lot of people just look oddly shiny, and their faces are perfectly smooth. Combine this with some eyes are just slightly too big and the fact that people’s mouths don’t quite sync up to their words, and you’ll discover the real reason that Max feels lonely and isolated: Everyone around her is a creepy doll-person.

Cheap shots aside, the developers make some odd artistic decisions. The general visual style is realistic, but the highlight on objects you can interact with is a weird and cartoonish chalk scribble that doesn’t quite fit with the rest of the world. Photography features heavily in the plot and Maxine’s character, but some of the photographs look like you’d expect (i.e., the thing as it appears in the game), while others look more like watercolors. It doesn’t make any sense even from a stylistic perspective, and sometimes it just looks gross. 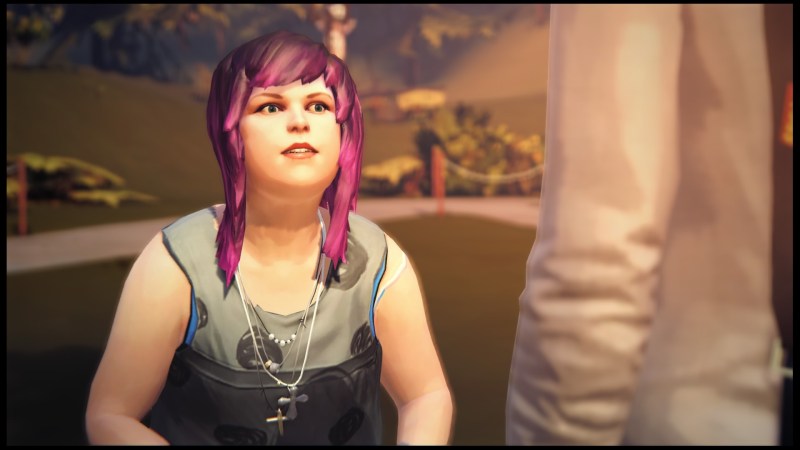 Above: This girl is especially unsettling to look at. She has the lifeless eyes of a shark.

Remember what I said about it you when your decisions matter and how cool that was? Well, it’s also not cool.

Like I mentioned in the reviews of every chapter of developer Telltale’s The Wolf Among Us, you can’t turn these prompts off. And it can be just as intrusive and immersion-breaking here as in that other series, especially when you end up trying to figure out what exactly makes this snow globe more important than that lamp. It might be more interesting long-term to be able to trace events back to their unlikely origins, but sometimes Life Is Strange even tells me before I do something that it’s going to come back later. And that pre-warning is especially unnecessary in a game that lets you erase your errors from history most of the time. 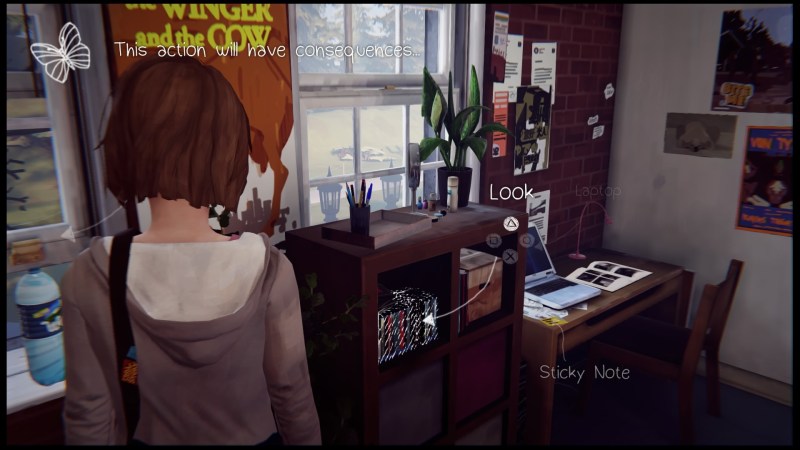 Above: Do NOT look at the DVDs without a lot of careful deliberation. Apparently.

Chapter 1 of this five-part series is off to a promising, if timid, start. It presents a lot of ideas and mechanics just to show you what you’ll be doing later, but it’s pretty clear that the really interesting bits are yet to come. Still, this is a game worth checking out if you can handle the unavoidable alerts and iffy art choices.

Life Is Strange:Episode 1: Chrysalis is out Jan. 30 for PlayStation 4, Xbox One, and PC. The developer provided GamesBeat with a PlayStation 4 download code for this review.