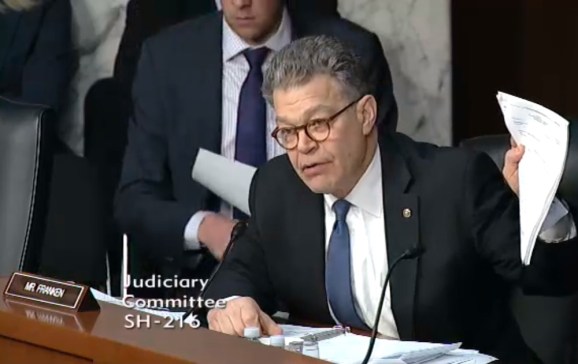 Senator Al Franken listens to earlier testimony of Comcast executives on the goodness of its proposed acquisition of Time Warner Cable.

The Federal Communications Commission (FCC) today finally put a realistic definition on what broadband really is, and all of a sudden the cable companies’ argument that there’s plenty of competition in broadband rings very hollow.

The new definition would demolish the argument, which is the same one Comcast used last year when lobbying Congress for approval of its still-pending proposed acquisition of Time Warner Cable.

The FCC said today that real broadband can do download speeds of 25 Mbps or more.The redefinition passed by a vote of 3-2. The big cable companies had lobbied hard against the redefinition.

Under the FCC’s old definition of 4 Mbps or more, Big Telco and Big Cable could truthfully say that consumers have lots of different choices of providers of broadband, when really many of those “choices” were cheap, DSL-speed regional or local providers.

Comcast, however, prefers to slice up broadband markets by usage level, as they exist today. “Because TWC has so few customers at 25 Mbps, when you combine Comcast and TWC, the market share at that level only increases 1 percent,” says Comcast’s VP of government communications Sena Fitzmaurice in a note to VentureBeat.

Comcast also says broadband competition levels are not part of merger discussions. “And the FCC and the DOJ haven’t used national broadband share in merger reviews in any case – they’ve always looked at the local market to see if consumers see a reduction in choice – and in this deal that isn’t the case,” Fitzmaurice says.

Despite Comcast’s comments, the lack of broadband competition makes it easier to understand why Google jumped into the broadband game with its Google Fiber business. Many people believe that Google’s end game is just to improve the pipes through which its entire set of services runs, and that it would be happy just to apply pressure to the big ISPs to improve the the speed of their services.

This has indeed worked, but only in the three markets where Google has already built. That’s why Google has announced plans to build in more cities.

“The cable guys always claim they’re subject to fierce competition, but that’s only true where there’s fiber,” said Susan Crawford, a co-director of the Berkman Center for Internet and Society at Harvard University and an expert on broadband competition.

“The FCC’s action today shines a bright light on the fact that three out of four Americans have only one choice when it comes to speeds of over 25 Mbps: their local cable monopoly,” she said.

With the new definition, Comcast and Time Warner can no longer take refuge in the fine print when standing before Congress and saying their merger will benefit consumers.