Google is finally starting to roll out Gmail support for Google Wallet outside of the U.S. Starting today, users in the U.K. can use Gmail to send money peer to peer.

What? Isn’t Google Wallet already in the U.K.? Technically, yes. There, as in many parts of the world, you can open a Google Wallet account to pay for items in Google Play. But today’s rollout is the first step toward bringing the full version of Google Wallet to the U.K. — and potentially beyond. Google clearly has its sights set on Europe for growing adoption of its digital wallet. The company first launched ‘send money’ for Gmail back in 2013, but this is the first time the feature will make its way out of the 50 states. 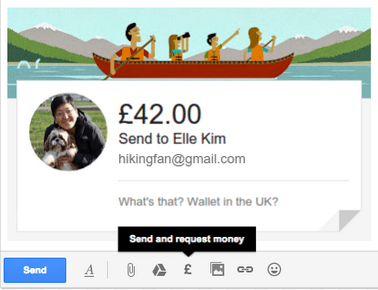 As of today, users in the U.K. can start sending British pounds to one another via Gmail. When you compose an email, a little ‘£’ ‘ symbol will appear alongside various attachment options. Both senders and receivers will have to set up a Google Wallet account in order to use the new tool.

Once the search giant has enough registered users in the U.K., it will probably push out its tap-to-pay mobile wallet app. Unlike the U.S., the U.K. is well versed in contactless payment solutions, so Google Wallet could potentially see higher adoption rates there than here.

If, that is, it can get there before Apple Pay.

Apple is currently in negotiations with several banks in the region, which is stalling a launch planned for sometime in the first half of 2015, according to the Telegraph. But most mobile phones in the U.K. run on Android, so there’s still plenty of opportunity for Google in the mobile payments space.