Google today updated its main Android app with a big enhancement to Google Now: It can serve cards from third-party apps. So far, the new functionality is supported by 40 different apps, bringing you Now cards that offer information when it might be most useful.

Google says it teamed up with over 30 developers to launch these new cards, which are rolling out “over the next few weeks.” The company naturally plans to add more cards and expand the feature over time. 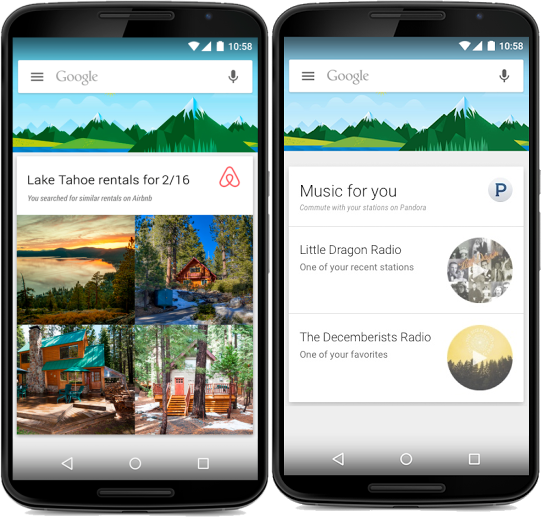 Google gives an example of a day filled with Google Now cards from these apps:

In the morning, catch up on news of the day with cards from The Guardian. On your commute, Pandora can give you recommendations for music to play, based on what you like, or you can be reminded to complete your daily French lesson on Duolingo.

During your downtime, you can take care of the groceries, with a card from Instacart reminding you to stock up on the things you often order. If you’re planning a trip and looked up places to stay on your Airbnb app but couldn’t make up your mind, you’ll see Now cards from Airbnb for the location and dates you’ve researched. And when you land at an airport, you’ll see a card to order a Lyft.

This can potentially make Google Now much more useful since information is no longer limited to just Google’s own services. That said, you’ll only get cards from third-party apps that you have installed and actually use.

To take advantage of this feature, you’ll need to grab the latest versions of not just the Google app, but all the apps you want to serve you cards, from Google Play. The company didn’t say when it plans to bring the feature to its iOS app.