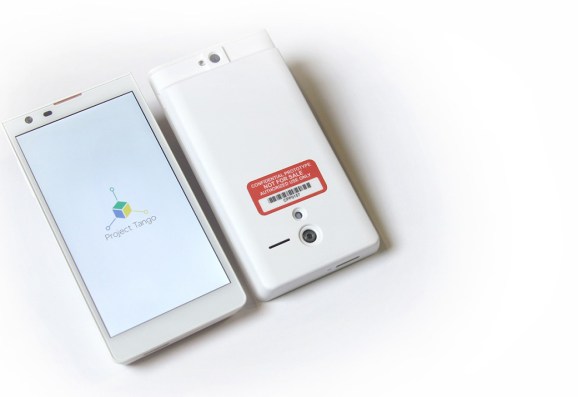 At the moment, it’s not quite clear what’s happening to Project Tango, Google’s ambitious plan to put 3D mapping technology inside your smartphone.

Today Google’s Advanced Technology and Projects group (ATAP) announced that, “after two fast-paced years in ATAP, and many technical successes, the Tango team is transitioning from ATAP to a new home within Google.”

This move reminds us of another recent spin-out: Glass, which “graduated” from the Google[x] team but then was later acknowledged as a disappointment by execs.

But according to Google, that’s not the case for Tango. We asked if the project will be scrapped, and a spokesperson told us “no, quite the opposite” [emphasis ours]:

In 2 short years, Tango has achieved many technical successes and Google is committed to continuing to develop the technology. As we’ve said before, one of the strategic pillars of ATAP is temporary project teams and durations. It creates a sense of urgency. Tango’s time in ATAP has just reached the two-year mark, and we’re proud of this successful transition.

All I can say is that Google is committed to continuing to invest and develop Tango technology and applications for users. There are many exciting potential applications for Project Tango, particularly within mobile, but we don’t have any specifics to share right now.

So, the fate of Tango remains unclear for now, but apparently Google has a lot planned for the project.

Meanwhile, we’ll have to settle for the recently released details on Project Ara, Google’s other ambitious smartphone project.