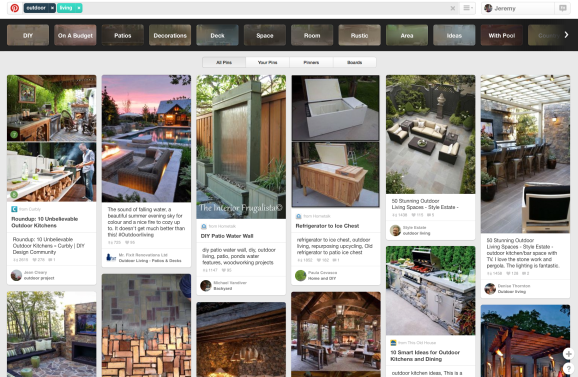 Pinterest's Guided Search in the wild.

Pinterest introduced its Guided Search feature — a little bar showing search categories that’s perched under the search box — last year with the goal of helping its users discover content. It’s helped Pinterest get people to use the site more, and now the company is talking about what goes on under the covers of the feature.

It turns out that Guided Search is highly customized, based on geography, gender, engagement with the guides, and other parameters, as Kevin Ma, a software engineer on Pinterest’s Discovery team, explained in a blog post today. And Pinterest places popular guides prominently for a few days before dropping them down to lower ranks, making the feature reflective of the trends of the day.

All of this has done good things for Pinterest.

“Since its launch, Guided Search has become an important driver of Pinterest search traffic and Pinner engagements,” Ma wrote. “The number of daily searches on Pinterest also has greatly increased, with a 25 percent uptick in searches per-person.”

Guided Search is one part of Pinterest that takes into consideration great sums of data on usage and other metrics. The basic search box is also data-powered, as Pinterest detailed earlier this month.

Meanwhile, companies like Facebook, Microsoft, and, of course, Google, use data to make smarter applications, search and otherwise.

Pinterest has been focusing lately on internationalization, so it’s no surprise to read about customization for different countries. Indeed, one of the most interesting parts of the blog post is Ma’s explanation of how Pinterest ranks search guides differently in different parts of the world:

We started ranking guides by localization last December, and have since seen a 5%-10% increase in guide clicks in many treatment countries, which shows us the search guides are more relevant and useful to users in across the globe. As part of localization efforts, we also calculate guide location scores based on how much interest Pinners of various countries show to each guide. Figure 6 shows guides ranked differently to users in the U.S. and U.K. For example, Pinners in the U.K. have more interests in “London Street Styles” than “Parisian Street Styles.”

Read today’s blog post to learn who engages most with Guided Search and on what days of the week — and how Pinterest creates and then ranks its search guides.