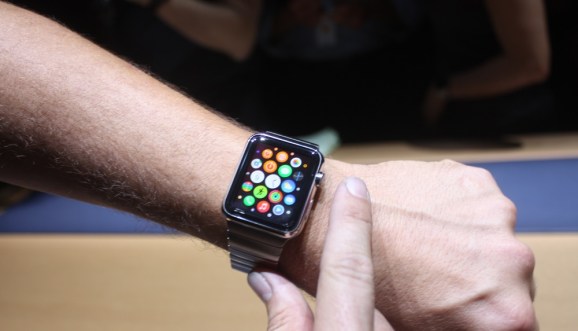 Every week, the news team at VentureBeat brings you a blitz of news day after day, but even for our most dedicated readers it can be a challenge to catch every single story.

So, we’ve decided to pull together a handful of the best stories from VentureBeat this week, just in case you missed them, or want to read them again.

I spotted an Apple Watch on the train this morning, and now I’m a believer

The man to whom I gave a gentle push so that I might fit inside the crowded commuter train this morning was wearing an Apple Watch. As the train stopped in a tunnel, the man apparently received a reminder on his wrist, and when he raised his wrist I got a clear view. No, it wasn’t one of the knockoffs they were selling at CES. This thing looked like a luxury item, and it had the now familiar “bubbles” Watch user interface. Read more

REDWOOD CITY, Calif. — When the Seattle Seahawks and New England Patriots kick off the NFL’s championship game Sunday, friends, family, and coworkers will gather across the country and the world to watch. But for one big group, while the game will be real, the gathering will be entirely virtual. Welcome to the Super Bowl party, Oculus Rift edition. Read more

Amazon is primarily a giant of e-commerce, but in the past eight years, it has developed a considerable side business as the leading provider of public cloud infrastructure with Amazon Web Services (AWS). Discerning AWS’ financial health has always been a roundabout process. But that’s about to change, because Amazon will start breaking out financial figures for the division, executives said today on the company’s earnings call, asBloomberg and others reported. It’s a long time coming, and it comes as a relief to cloud watchers, who after every quarter speculate on AWS’ exact financial position. And in a sense, today’s news is a watershed for the cloud infrastructure market, where AWS is ahead of Microsoft Azure, Google Cloud Platforms, IBM Softlayer, and several others. Read more

Yesterday was a huge day for Snapchat — and its bank account’s future — with the launch of Discover, its new media channel that brings users articles, videos, and other content from its partner publishers. While this is a huge deal for the ephemeral mobile app’s monetization strategy, and much of everyone’s attention was on the app’s Discover section, we noticed a couple of other changes in the app. They’re much more subtle than the shiny new content tab, and yet definitely worthy of attention and a few words from us. Read more

Career website Glassdoor today released its report on the “Best Jobs in America for 2015.” In the list of the top 25 jobs, 10 of the jobs were in tech, more than any other industry. Glassdoor’s list is ordered by a job score the firm gives each position. This score (based on a 5-point scale ranging from 1.0 as very low to 5.0 as very high) is determined by three key factors weighted equally: earning potential, career opportunities rating, and number of open job listings. Read more

Mobile phones now serve as portable computers, scanners, atlases, cameras, media players, and more. But did you know they’re also part of a growing global mobile sensor network that can track all kinds of data — weather, traffic, and human behavior? London-based startup OpenSignal released a report today about how the global proliferation of smartphones is leading to the rise of a wide-spread mobile sensor network, calling it “one of the most exciting technological innovations of recent times.” Read more

Over the past year, something must’ve clicked in the minds of Bloomberg’s editorial designers. They realized that if they make their magazine covers as jarring as possible — if the design breaks convention in a way that makes the reader uncomfortable — they’ll sell more magazines. The Businessweek arm of Bloomberg has long published intriguing print covers (not New Yorker-level intriguing, but I digress). Take the publication’s Tim Cook profile, for example, when it scrawled the words “Tim Cook’s Apple” in a neon all-caps script across Cook’s awkward grin. Read more