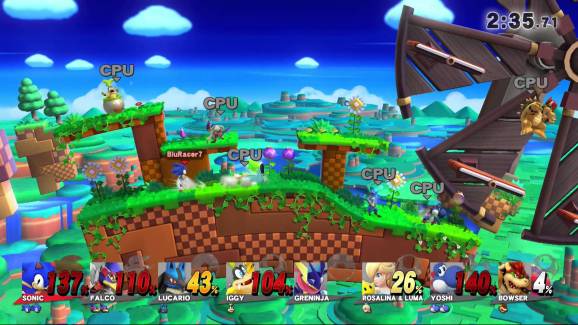 And you thought Super Smash Bros. for Wii U's 8-player mode was crowded.

Nintendo of America and fighting-game organization Apex are holding one of the biggest Smash Bros. tournaments ever this weekend, but it almost didn’t happen. Players gathered in a hotel in Secaucus, N.J., to battle it out in Super Smash Bros. for Wii U as well as Super Smash Bros. Melee for the GameCube, but one of the attendees accidentally opened a fire exit. That drew the attention of the local fire marshal, who declared the event a safety hazard and closed it down. That’s when Twitch stepped in to save the day.

“When we heard that Apex lost the venue, everyone scrambled to help to find another space and luckily the hustle paid off,” Twitch chief operating officer Kevin Lin told GamesBeat. “Apex is an awesome event, so we wanted to assist in any way possible to make sure it could still happen.”

Apex 2015 is not only one of the biggest Smash tournaments in terms of attendance, it also has the biggest prize pool in the franchise’s competitive history with over $18,000 on the line. Sponsors include ScrewAttack, Play-Asia, Twitch, and Nintendo itself.

You can check out the action for yourself starting tomorrow morning right here. The event now starts tomorrow at the Garden State Convention Center. Apex announced that its staff will work tonight to set everything up.

WE WANT TO THANK EVERYONE FOR THEIR WELL WISHES AND SUPPORT. Shout outs to @twitch for assisting with the new venue!

Over 1,000 people are set to participate in the Melee tournament alone, which is a game that is around 15 years old.