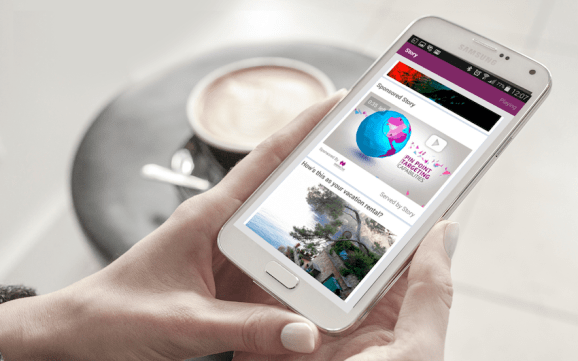 Native ads have that name because they appear to be part of their surrounding environment, whether sites or apps.

Today, ad tech firm Inneractive hopes to advance the use of the format for apps. It is launching what it describes as the first programmatic platform for inserting native video ads into content feeds of apps. “Programmatic” means an automated buying and selling of ads, governed by adjustable parameters.

“The in-feed programmatic native video (ad) format is something new,” CEO and cofounder Offer Yehudai told VentureBeat. “The combination of native and programmatic is very unique.” He pointed out that, without a programmatic solution, “you’re working an ad network — one network after another.”

Called Story, the platform specifically addresses apps that offer content in a feed, such as a flow of photos or text posts. Into this constantly updating stream of material, Story inserts a brief video ad that, marked as sponsored content, is intended to relate to the surrounding content.

The platform uses location, context, user segmentation, and other factors to determine what kind of video ad should be displayed. Native video ads are desirable for publishers because videos attract higher CPM rates than other ad formats and because native ads, which often resonate with the same themes as surrounding content, have higher engagement rates than other kinds of ads.

This is Inneractive’s first entry into native ad video, although it has previously offered interstitial video ads as well as pre-roll video ads. Based in Tel Aviv and with offices in Silicon Valley, New York City, and London, the company provides a supply side platform (SSP) and yield optimization platform so publishers can offer their mobile ad space inventory to advertisers. It also has an ad network for clients.

While non-programmatic tools for native video ad insertion exist, requiring advertisers to work with multiple networks, Yehudai said Story’s automation is opening up new territory for mobile advertisers. Programmatic display of native ads has been slower in coming because native ads, by definition, are designed to match the unique look and feel of the surrounding app or site — and thus are harder to scale.

But it’s not only the ability for automation to handle real-time rate and inventory negotiation for in-feed video that Inneractive is touting.

“Story (provides) the ability for the advertiser to tell a story to the user,” Yehudai said.

Story knows if an in-feed video ad has reached the end of its 15 to 30 second clip when the user moves on to look at incoming content from the feed. If the user does move away, the same video ad will appear in the next ad opening in the same session — and it will automatically start playing from exactly where it left off, until it finishes.

“For brand advertisers, the most important KPI (key performance indicator) is completion of the ad till the end,” Yehudai said. Inneractive’s format is built to finish the message. Currently, the standard for a video ad to count as being delivered is simply that it has to play for at least two seconds while at least halfway visible.

The Story video ad automatically plays with the sound off. If a user clicks on the video, it goes full screen with audio, and a second click brings the user to the advertiser’s landing page.

“The only competition out there (offers) in-feed (native), non-programmatic (video ads),” Yehudai told us.

“Programmatic, in-feed and branded video is unique,” he said, making the distinction between “branded” ads to promote a brand and ads to promote, say, app installs.

Now that mobile bandwidth is less of an issue for many users, video ads to smartphones and tablets are growing. eMarketer reports the U.S. mobile video market could hit $6 billion within three years — which would represent about half of all online video ads.

Publishers use the Inneractive SDK to acquire the Story capabilities, and the ad is served to Android devices with an embedded HTML5 video player. Support for iOS is coming next month. The Story platform is integrated with a real-time bidding engine, so that an advertiser using a demand side platform (DSP) can bid on the open slots.