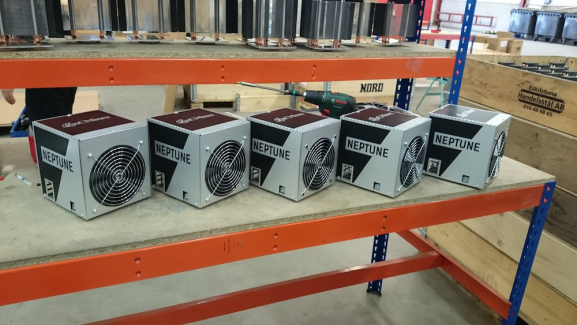 Cloud Bitcoin mining operation KnCMiners is announcing a new round of funding just five months after its last round.

Led by Accel Partners, KnCMiners raised $15 million to fund a superprocessing 16-nanometer chip for its mining servers. For comparison, Apple’s iPhone 6 and 6 Plus run on a 20-nanometer processor. The new chip has already been taped out by Taiwan Semiconductor Manufacturing Company. KnC expects to be the first company to market with this kind of technology.

The new chip will mean KnC should be able to generate Bitcoin at a reliable rate.

“What we like about these guys is that they’re hyper-efficient and thus have a good cost base,” says Michiel Kotting, investor at Accel Partners. Meaning: KnCMiners actually stands to make a profit on its operation, unlike some miners.

Between the exorbitant cost of energy associated with mining Bitcoin and the price of Bitcoin hovering around $238, some miners are no longer able to profit off their businesses. KnC, on the other hand, has an efficient data center in Sweden where it processes Bitcoin. The addition of 16 nm chips will only make its process more profitable.

KnCMiners started out selling mining equipment to at-home miners. Late last year, however, the company caught flack from some of its buyers for taking too long to send pre-ordered equipment. The company has since offered to refund dissatisfied customers for unfulfilled or delayed orders. It’s also gotten out of the equipment-selling business.

KnCMiners runs an entirely cloud-based operation and mines Bitcoin for itself. At-home miners can lease processing power from the company, but that’s it. The company no longer has to deal with delayed orders of physical units. KnCMiner’s clients can hook up to its power supply instantly.