A few years ago, Google invested heavily in Google+ in an attempt to take on Facebook. Despite many technical advantages and a few jewels such as Google Photos and Google Hangouts, Google lost the social network battle to Facebook (see sidebar below).

Now the tables have turned; this time, Facebook has brought the battle to Google and is taking shots at the company where it’s been strongest socially: in video, where Google’s YouTube property has dominated for years. 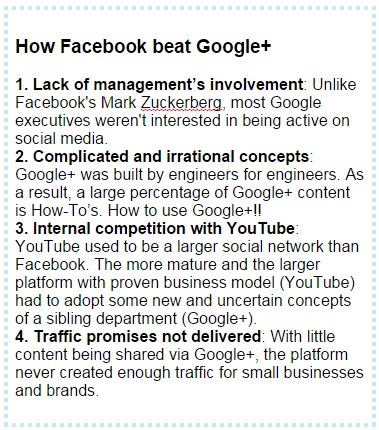 As we’ve all noticed, Facebook’s autoplay feature on videos is extremely engaging. Automatically watching a few seconds of a video is a much bigger teaser than the YouTube thumbnail image. This key feature is not only pushing YouTube videos off Facebook, but also contributes to an increased rate of video watching and ad revenue from videos.

Also Facebook is encouraging users to upload their videos on Facebook not just with autoplay but also by showing more videos than other content in our newsfeed. We have all noticed that, in less than a year, we are seeing a lot more videos, because more people upload them but also because Facebook has decided to show them more often.

Moreover, since the like and share buttons are so immediately present right below the Facebook video, the distribution is much stronger and faster on Facebook than on YouTube. Users are watching the video and sharing it in the same place. This is exactly why a video-centric social network is going to win and why Google missed a huge opportunity a few years ago by not capitalizing on YouTube and launching another social network instead of making YouTube “The Social Network”.

YouTube reacted immediately by autoplaying the “related videos” at the end of each YouTube video play (it has been testing that option for a while). No one can decide which videos are related; the related videos are chosen by YouTube’s algorithms based on keywords and contents of the video, but the goal is to increase the number of videos “watched” and report bigger numbers to advertisers and marketers.

What YouTube can do, which will have a bigger impact on numbers, is to simply activate the autoplay (not just related videos) in all embeds, without audio, just like Facebook. Of course, that will require rearrangements in the way YouTube counts the views for advertisers and content providers, but this will immediately remove the disadvantage vs. Facebook videos inside Facebook. Technically the autoplay in the embed code has always existed with YouTube (with sound though); it’s just a matter of the company making the strategic decision to make it universal — and it may make that decision very soon.

Since Facebook came late to the game, the platform was missing the massive catalog of videos that YouTube had, as well as many years of market domination. But it seems that the social network’s 1.35 billion users are doing the job for free for Facebook. We are seeing many people taking videos from YouTube to Facebook; their own videos, older videos that are in public domain, or even copyrighted materials that Facebook doesn’t worry about if a video has been initially uploaded to YouTube!

YouTube is still offering a much more robust infrastructure, a much wider set of features, more options for managing the resolution of the video, and a more feature-rich player overall, more open to other platforms, more attractive to developers, and, importantly, more attractive to content creators. Besides, when considering all the Live streaming capabilities including YouTube Live Events, Hangouts on Air, or Business Hangouts, Facebook is still far from being a serious technological rival to YouTube.

But in terms of marketing, even though Facebook has yet to find a winning business model including compensation for video creators, the leading social network has already become a dominant player that brands should not ignore.

[The opinions expressed in this story are solely my own and do not express the views or opinions of my company.]

Darius Lahoutifard is an Enterprise SaaS Executive and Enterpreneur, the founder of Business Hangouts, an Enterprise App for Google’s Hangouts on Air. You can follow him on LinkedIn here or follow his company on Twitter here.