Confide, a self-destructing-messaging app for professionals, is fleshing out its service with documents and photos.

As of today, the mobile app integrates with Dropbox, Google Docs, and iCloud. All items sent via Confide’s platform will self-destruct after they’ve been read.

Unlike most self-destructing-messaging apps, Confide targets professionals and executives — people with confidential information they need to share and destroy. To make these communications super-private, the words in Confide’s messages are blocked out with orange bars. To read a message, you have swipe your finger alongside the blocks to reveal each line.

But for documents and photos, the company takes a slightly different approach. When someone opens a document in Confide, the document is kept entirely blurry except for a small strip of a reading window. A reader can expand within the window to get a closer look at elements in the document, but they cannot look at the whole page at once. If a person tries to take a screenshot of a document, they’ll immediately get locked out of the message. The sender will also get a notification saying the document they sent has been copied. 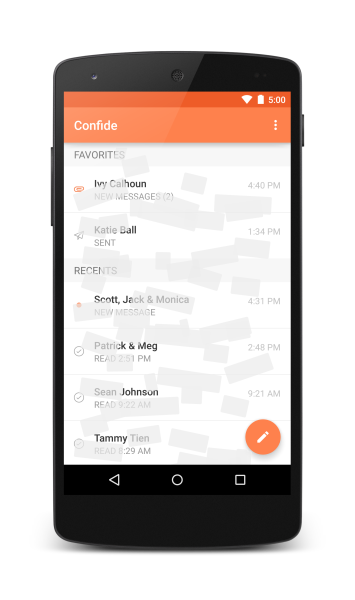 Of course, someone very desperate could always take a picture of their mobile phone screen with a secondary phone — a measure Confide does not protect against. But this is something none of the self-destructing-message apps has been able to figure out.

The grand vision for Confide is that it will seamlessly fit into an enterprise ecosystem, so that when you right-click on a document, you get the option to send via Confide. Though Confide is not available on desktop yet, this is how the company ultimately plans to make money.

Right now Confide is free, but in roughly two months, the company is slated to roll out a paid enterprise version of its app that it will tailor for group work and activity. The software service will allow IT departments to easily create and decommission accounts as well as to create address books and distribution lists, and to access other enterprise-level features.

“And that’s in my wheelhouse,” says cofounder Howard Lerman.

Lerman is also the CEO of Yext, a software-as-a-service company that keeps businesses’ public data (like address, hours of operation, and phone number) up to date across various platforms like Yelp and Facebook. The company reported doing $33 million in sales with 70 percent gross margins back in 2013, according to Forbes. So software-as-a-service is indeed within Lerman’s wheelhouse.

Confide has competitors like Mark Cuban’s Cyber Dust and Wickr, both of which are self-destructing-messaging platforms. Wickr already allows document-sharing, but for the time being, the company has its sights set on pushing the consumer applications of its app. Down the road, the company aspires to secure the world’s financial transactions and communications, so it’s not impossible that Wickr could eventually go after the enterprise market as well. But considering that the company is for the moment tied up with its consumer version, Confide could get a running start.

Cyber Dust, on the other hand, hasn’t officially announced plans to monetize. So the company is not much of a concern for Confide — yet.

In the meantime, Confide has plenty of opportunity to emerge as a dominant player among enterprise private-messaging services. And with the Sony hacks recently behind us, it’s possible enterprises will be looking for just such a service. Unfortunately the jury is still out on whether the enterprise community, which has failed to secure itself in the past, is ready to invest in privacy.