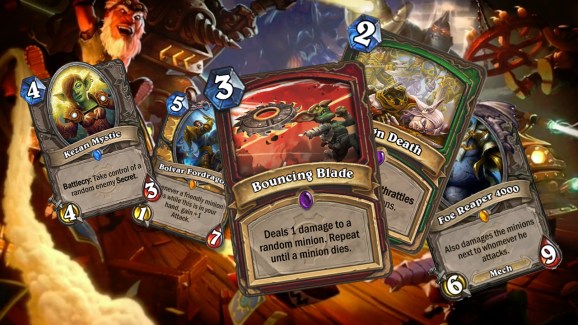 Trying to collect all of the best cards is one of the primary drivers of spending in games like Hearthstone.

Activision is making tons of real cash from virtual worlds.

The publisher reported its 2014 results today, and the company revealed that it made $2.2 billion from digital sales alone last year. That makes up 46 percent of Activison’s $4.81 billion in total revenues for period. That helped the company generate a record earnings per share of $1.42, which is up from 94 cents from 2013. Activision is one of the top third-party publishers in games, and it has dominated the last decade with perennial hits like Call of Duty. Now, as some of the shine fades off its aging franchises, the company is slowly finding replacements.

In a statement to investors, Activision chief executive Bobby Kotick said that “2014 was another successful year.” In terms of the company’s financial performance, he boasted about his company’s record earnings per share, its double-digit revenue growth, and digital doings. He went on to talk about the success of Activision’s software.

“We expanded our franchise portfolio by launching two of the industry’s most successful new brands, Blizzard’s Hearthstone: Heroes of Warcraft, and the biggest new IP launch in industry history, Destiny,” he said. “Combined, these franchises attracted over 40 million registered players worldwide and generated more than $850 million in revenue.”

While Kotick didn’t reveal the sales numbers for Destiny, he said the game has “16 million registered” players — although that could include people who have multiple accounts.

He was more specific about Hearthstone. That game now has 25 million registered players thanks to its continued growth on PC and iPad as well as its recent launch on Android tablets. This game — along with digital sales for Call of Duty and Destiny — likely gave Activision’s digital revenues a big boost.

Looking forward, Activision is not expecting to repeat 2014’s huge performance. For 2015, the company is expecting revenues of $4.4 billion and an earnings per share of $1.15.

That is likely due to the fact that it will release a new Call of Duty but not a new Destiny. The company is also likely building in lower expectations for the future of Call of Duty, which has started to trend downward over the last two iterations.

The outlook has Wall Street spooked, and the company’s stock price has dropped 7.5 percent to $20.20 in after-hours trading.