Mobile games appear to be simple compared to their bigger, flashier cousins on consoles. But one developer maintains making his first app for smartphones and tablets was harder than making one of the biggest first-person shooters of all time.

Industrial Toys is launching its Midnight Star shooter game for iOS today after three years of development. Bungie cofounder Alex Seropian said in an interview that the task of creating the mobile game was almost as hard as creating the original Halo. The ambition of Industrial Toys is to bring the fun of hardcore console-like games to the $25 billion mobile gaming market, where casual fare such as Candy Crush Saga has ruled. If anyone has a chance of bringing hardcore games to mobile, it’s people like Seropian, whose Halo series from Bungie has sold more than 60 million copies.

Midnight Star is the first game in the M* universe, and it follows last week’s introduction of Midnight Rises, the interactive graphic novel released as the sci-fi backstory for the shooter. As such, the Pasadena, Calif.-based startup has created two transmedia apps, one for fans who want to shoot things and the other for those who want a good story. 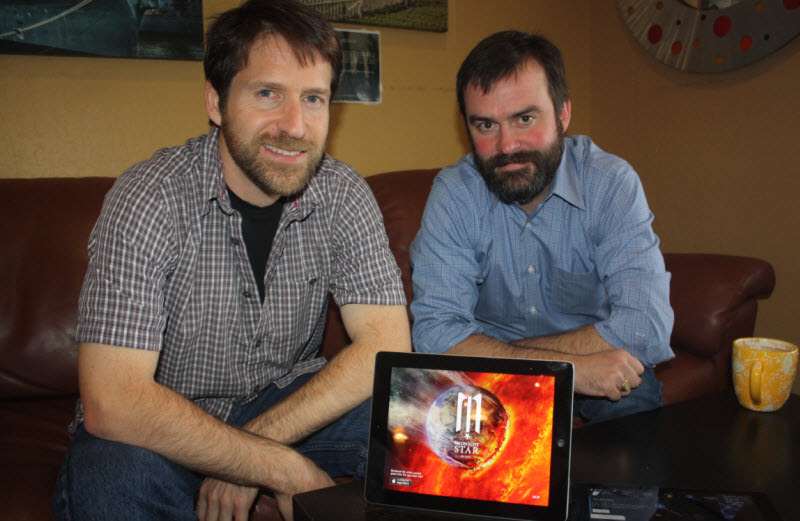 Above: Alex Seropian and Tim Harris of Industrial Toys show off Midnight Star.

The story is set 120 years into our future aboard the MSRV-Joplin, a research vessel newly outfitted with military weaponry to explore a mysterious signal coming from within our solar system. When a disaster strikes, the ship and crew are transported across the cosmos to take part in a war that is not their own. Their job is to undo the catastrophe that befalls their crew, their ship, and the entire human race.

Seropian said that the challenge of Midnight Star, as with the original Halo for the first Xbox in 2001, was to create a control system that worked for players on a new platform. Industrial Toys’ team of 30 had to reimagine a hardcore shooter experience that would work with the more intuitive but less precise touchscreen.

Their mission was to create great mobile games that were appealing to people like themselves, who grew up playing hardcore games but no longer have much time to sit in front of a PC or console, said Harris.

“The development of Midnight Star and the original Halo had a surprising number of similarities but also some stark differences,” Seropian said. “I would say the most interesting thread between the two was the development of the game’s controls. In both instances we were developing for a platform not known at the time for shooting games.”

Back in 2000-2001, people played shooters on the PC with a keyboard and mouse, not a console game controller with joysticks. And now, using a console controller isn’t the norm for most touchscreen players.

So the challenge, Seropian said, was “redesigning how input and control could be built specifically for the hardware to elicit the visceral satisfaction of a great shooter.”

He added, “In contrast though, our development process on Midnight Star is designed to be ongoing and have the community as a major input into the development of the game. That’s a function of this project being built for mobile, for digital distribution and as an online driven experience.

“The fact that Midnight Star is a free-to-play game also means our relationship with our customer is extremely tenuous at the very beginning all the way to extremely tight the further into the experience gamers get. That means we have to design for a much, much wider bandwidth of gamer types. For instance we have some very deep storytelling mechanics in the game, but we chose to deliver them later in the experience than we would have in a $50 paid game, mostly to help target that content at the players that are more likely to want it.”

Bertone said, “We really started looking more at the arcade shooters, where you make the game more fun and arcade-like and get players competing with each other.”

In Midnight Rises, the comic book story begins in 2134 with the activation of the Morningstar Protocol. That is a directive that goes into effect when aliens make contact with Earth. The governments of the world rally together to deal with the threat and figure out if the aliens are good or evil. Humans have barely started traveling among the stars. 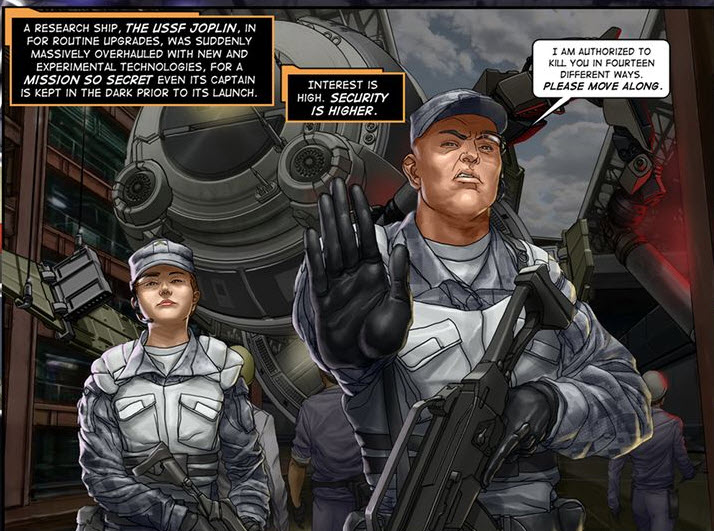 They send out a modified mining spaceship, the Joplin, to investigate the signal. We meet the hero, Charlie Campbell, who is the communications director on the mission. The player can make choices, like who to visit on the ship, and which details to read about the various characters. An illustrated timeline bridges the story from the present day to the comic’s events and the events of the game. You can unlock information in the comic that will be useful.

The novel has beautiful artwork from Choi, a former X-Men comic artist who serves as the concept artist for Industrial Toys for the shooter as well. That provides for a consistent art style across both the comic and the game, Seropian said. This is a true transmedia effort designed specifically for the iPad and other iOS devices.

The name comes from the nature of the alien communication. The term “morning” is used to describe it if the communication is peaceful, while the word “midnight” is used if it turns hostile. It begins as the mining ship nears the alien communication site on another planet. The comic doesn’t have animations, but it creates the illusion of motion through parallaxing, or moving an image sideways across the tablet screen.

In the shooter, when you make contact with the aliens, the fighting starts. To shoot an alien, you touch it on the screen. Your character aims, and a reticule appears on the creature. You hold it down to fire and use your finger to follow the alien as it tries to dodge or hide. If you hit the alien enough times, you kill it. You do this over and over until you clear a section in about two minutes. A short firefight enables you to set it aside and go on with your life, in case you don’t want to spend hours playing a single game session. 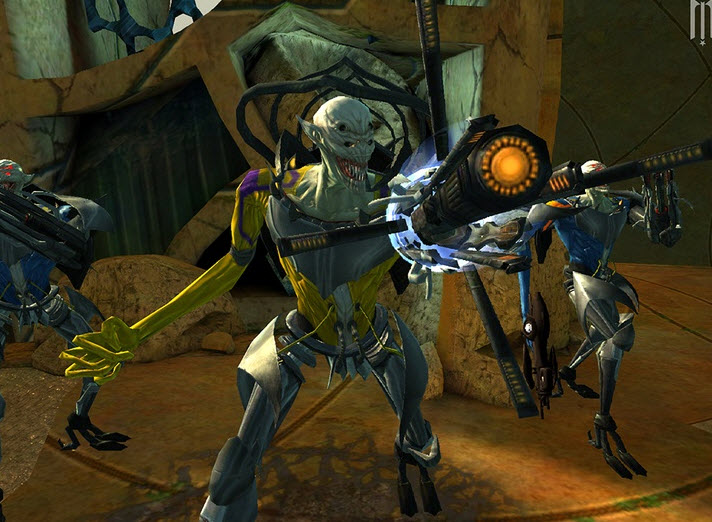 You use some of the many guns in different ways. You can pinch the screen, as if you were viewing a photo, to zoom in on a target with a sniper rifle. You tap the head to try to get a headshot. The more headshots you get, the greater the points you rack up. If you press two fingers on the screen, you lay down a shield to protect your character.

You can pull out tricks, like a levitation power that makes the aliens float in the air. You can pick them off until the power wears off. The mechanics are simple, and they don’t require you to do things that are just too hard to do on a touchscreen.

The game will debut with a large chunk of the story, but Industrial Toys will keep coming up with content over time. The game’s modes make the title replayable, too. In hardcore mode, you have to get more than 30 headshots in a round. In psychotic mode, you have to play flawlessly.

In multiplayer mode, you can send challenges to friends and share your results of missions. You can modify a level and issue a challenge for a friend to play it at your direction. For instance, you may have to play with no shields. In one kind of tests, you may get three chances to clear a level. If four people are in one, the winner takes all. If you win, you nab the jackpot of resources that are at stake.

You can use your reward currency from playing to upgrade your gear. You can also purchase a different kind of currency to buy premium gear. You aren’t required to pay real money to win or beat friends. Industrial Toys has invested heavily in the communications features, like chat, so that it can build a community worthy of a major shooter game.

Midnight Star offers all sorts of rewards that it designed to give you a smile and keep you engaged. You unlock features on guns and level them up, just like a character. You can eventually get goodies like a shotgun that can chain lightning bolts together.