Last night was my first Crunchies. I was excited. I was briefly on stage to present an award. I was nervous, but it was a good kind of nervous. The sold-out event took place at San Francisco’s beautiful Davies Symphony Hall, a venue that’s usually stuffed to the gills with tuxedos and evening gowns.

It was the eighth year of the awards ceremony, which some have called the Oscars of the tech world. The dichotomy between Silicon Valley’s awards show and Hollywood’s was certainly not lost on the evening’s host, T.J. Miller, who occupies an odd position at the nexus of both — he’s the star of Mike Judge’s HBO satire “Silicon Valley.” 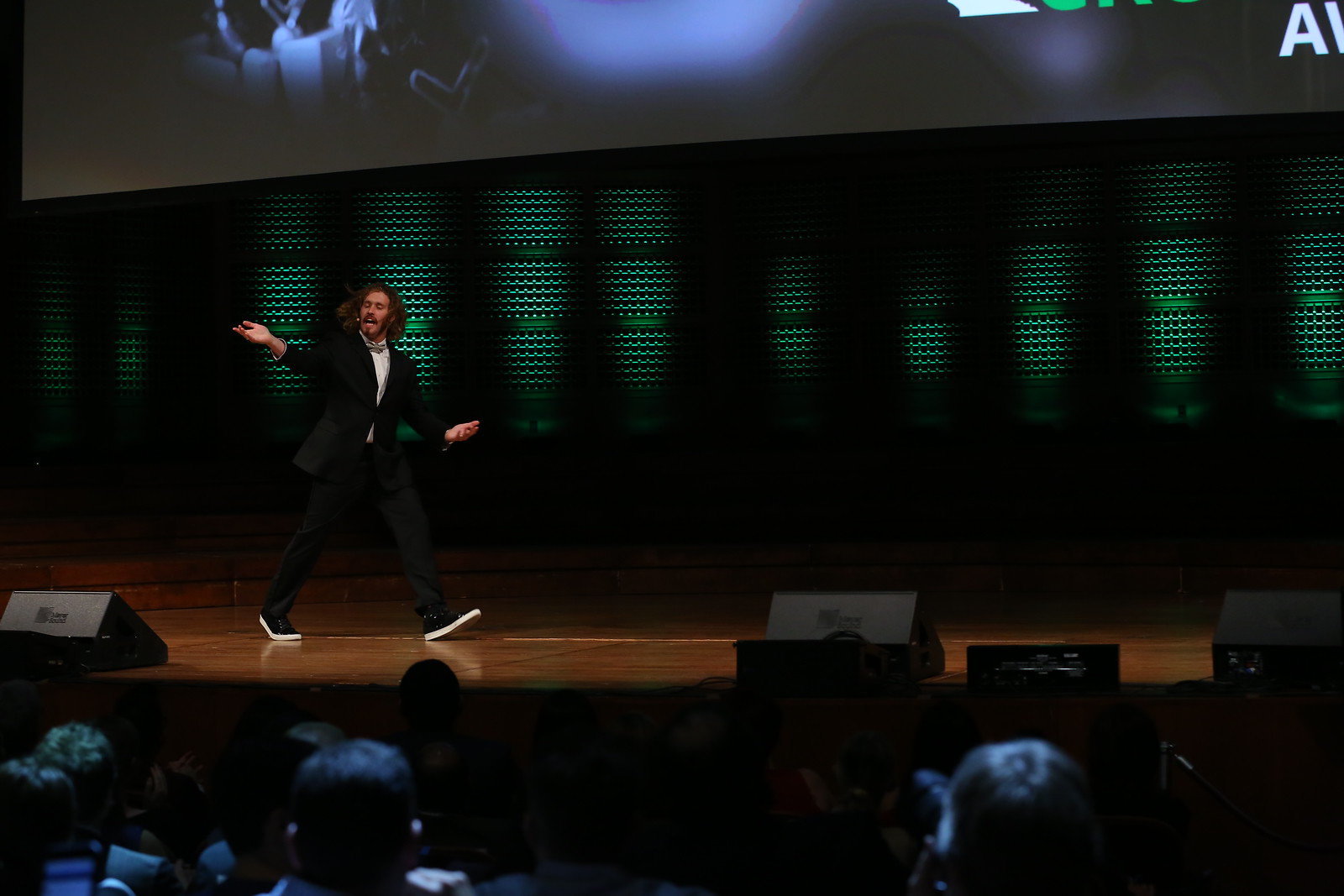 “This is Silicon Valley literally buying or renting the space at the most beautiful concert hall in the Bay Area to throw a fake awards show to give themselves awards,” Miller said during his opening remarks last night.

Miller makes his living parodying the Valley’s worst people, habits, obsessions, prejudices, and faults. Some of it is painfully spot-on, as were some of Miller’s comments last night. He’d clearly been coached by some serious insiders, and he obviously didn’t know the meaning of some of his own references, but the audience did.

But as the night wore on, I couldn’t help keeping tabs on some of the truly bizarre things that took place. Many of these were set off by Miller, but not all.

1. The first thing that happened when I arrived in my suit at Davies Symphony Hall is that I crossed what looked like a picket line. Actually there were about 40 demonstrators carrying signs and yelling about San Francisco’s lax eviction laws. They were there to rail against the rich people from Silicon Valley who buy big apartment buildings in San Francisco, then hit all the tenants with Ellis evictions. A couple of them zeroed in on me as I crossed the line and got up in my grill a little, but no harm done.

As Re/Code’s Nellie Bowles reports, the demonstrators later grouped themselves around a guy dressed up in a white wig to resemble billionaire investor Ron Conway. The guy had made up a set of his own “awards,” which included the “Urban Regression Award” to Y Combinator “for turning a sophisticated and mature city into a frat house.” Good times. 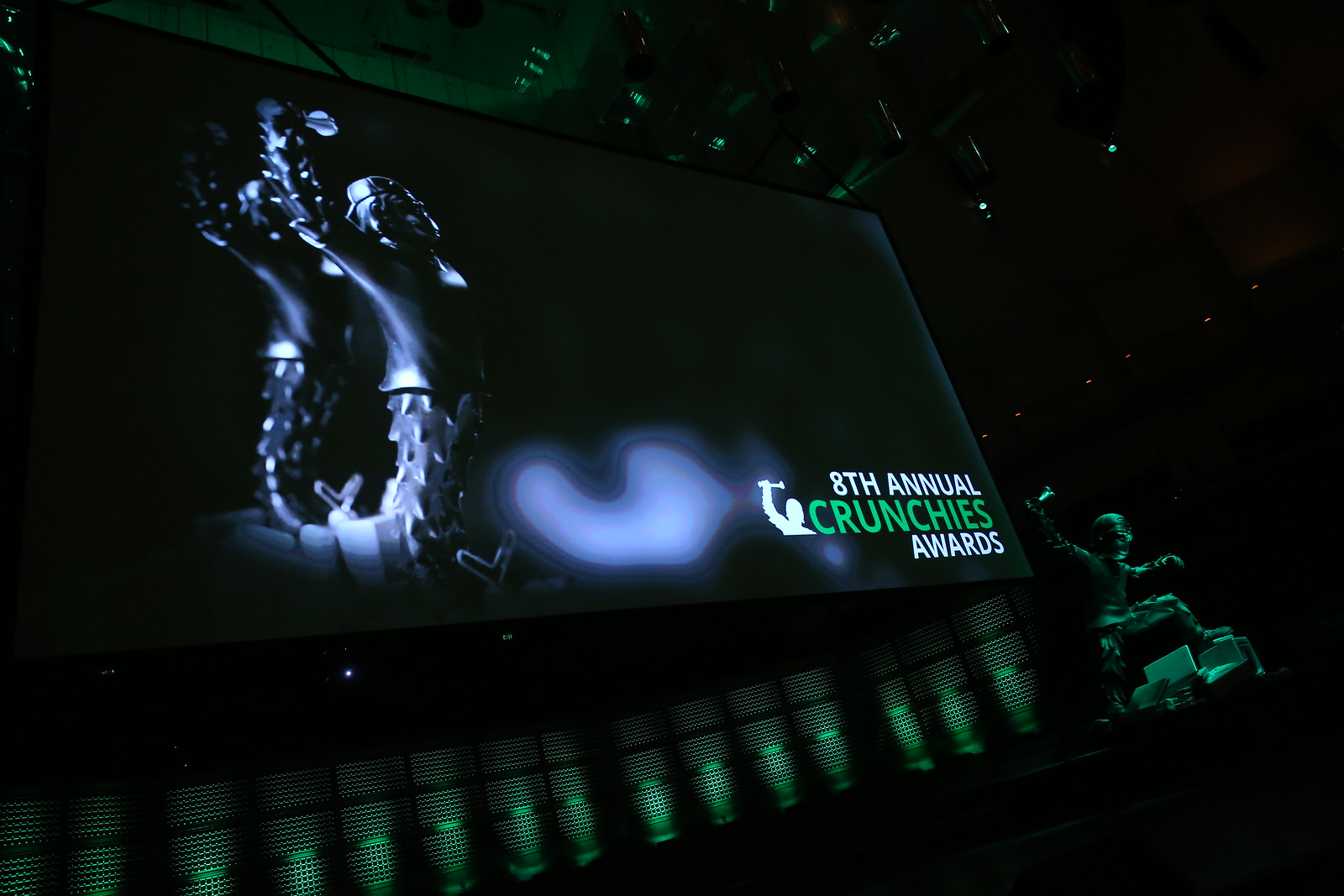 Above: The big screen, and the Crunchy trophy

2. One of the first things Miller commented on last night was the Crunchies trophy itself. I’d been seeing it all day, but hadn’t really thought about it. “What is that?” Miller kept asking throughout the night. Well, it’s a monkey standing in a pile of what looks like computer cases and old-school memory tape; he’s wearing a backwards baseball cap and a polo shirt, and no pants. He’s raising a bone over his head 2001-style to strike a blow at the old computer junk at his feet? 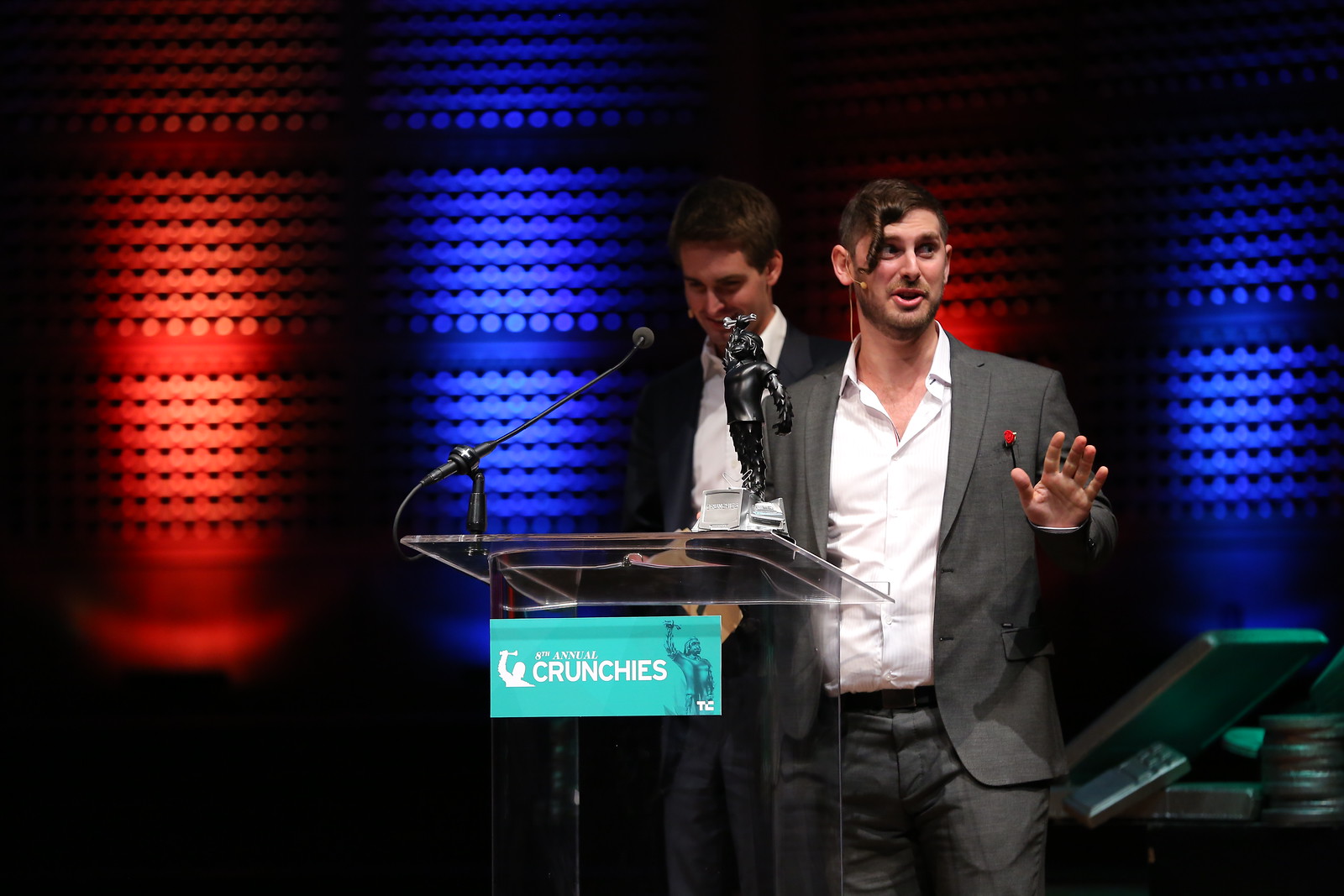 Above: TechCrunch’s Josh Constine and SnapChat CEO Evan Spiegel present an award at the Crunchies.

3. As one of the presenters last night I was given a short script to read. It introduced the product category, then described the nominee companies. Mine wasn’t really too bizarre, although a couple of the company descriptions were, well, odd. But the script was filled with terrible jokes. Not jokes that were so bad they were good. No. They were the kind that were so bad they were just bad.

Many of the presenters dispensed with the script altogether, to avoid saying lines like: “Because as we all know, there’s nothing wrong with coding like a girl.” That nugget of comic genius was on my VentureBeat collegue Daniel Terdiman’s script, and he gracefully talked around it. Others weren’t nearly so lucky, often choking out the lines to utter silence from the audience, then standing there basking, dumbfounded, in the bright lights.

The TechCrunch intern who wrote the script should probably be relieved of his or her duties, as Michael Arrington suggested late in the evening. 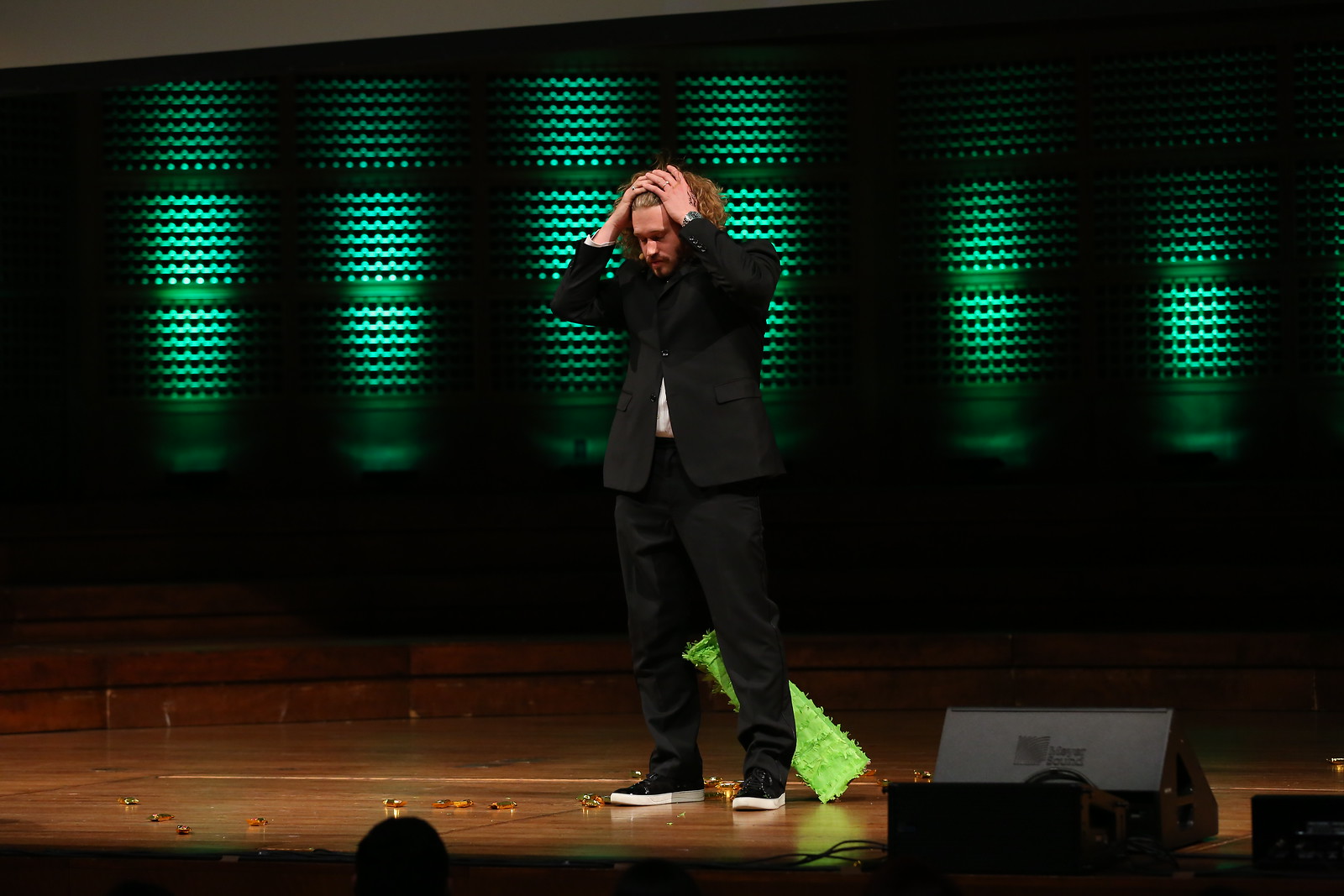 Above: Emcee T.J. Miller, just after breaking the TechCrunch pinata over his head.

4. T.J. Miller, most thought, did pretty well last night, until the end. Many thought Miller was drunk or high at the end of the three-hour-plus affair, and he just wouldn’t leave the stage. He was not “forced from the stage” as some outlets have stated today, but they did turn the music on, and his mic off. And that was well after people started walking out.

Maybe he was intentionally trying to drive it into the ground. OK, comics do that sometimes. Or maybe we was too confused to figure out how to wrap things up and get off the stage. Or maybe he really was drunk. He came out with a big TechCrunch pinata, and toward the end he picked it up and broke it over his own head. One thing was clear: Miller has no respect for Silicon Valley — either on the show or in person — and there’s probably something good, or at least funny, in that.

The weird thing was that Miller had some of his funniest lines of the night during his last appearance on stage. Well, that’s subjective — he free-formed this definition of BarkBox’s business: “Barkbox: where white people ejaculate onto other white people.” He also had some nice suggestions for slogans for tech companies, including these: “Lyft: Do whatever you want back there, I’m high,” and “Airbnb: Visit new places, meet new people, get fingered on a Murphy bed.” 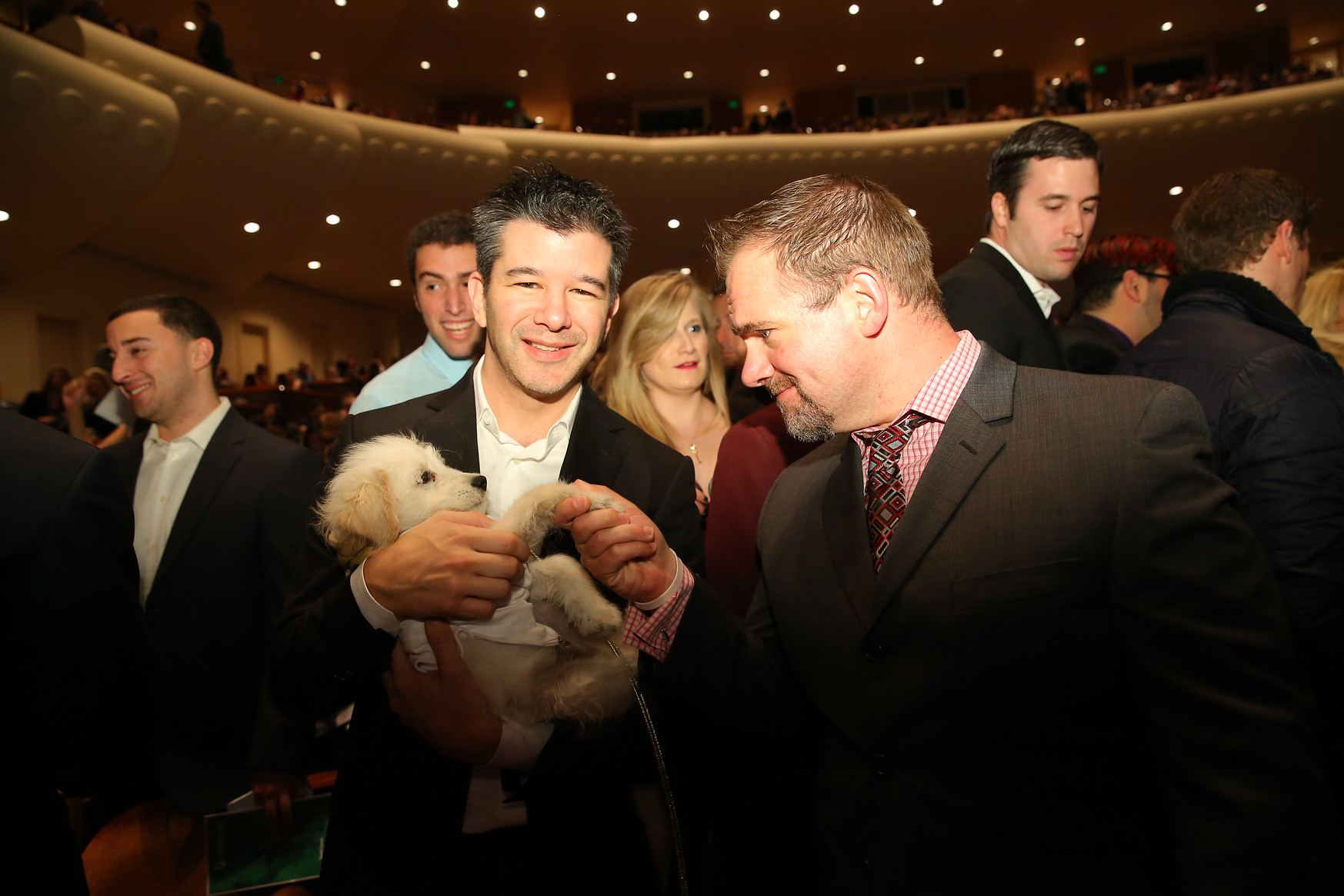 Above: Uber CEO holding his girlfriend’s dog after the Crunchies Awards Thursday night.

5. Early in the night, Miller seized on the fact that Uber CEO Travis Kalanick’s girlfriend came into the historic venue carrying a little white dog, which I heard was an Irish Terrier. The young woman, I’m told, is Gabi Holzwarth, a one-time street musician who now plays at swanky tech industry parties.

During that onstage/offstage repartee between Miller and the young woman, Holzwarth said she’d been able to gain entrance with the dog because she came in through the “artists’ entrance” at the side of the building. And then she explained — I think I got this right — that she is a “bilateral violinist.”

Oh yeah, and the dialogue started when Miller said to Holzwarth: “Bitch, Asians aren’t supposed to be this entitled in the U.S. … Is this bitch from Palo Alto?”

6. After Miller made some jokes about the shipping startup Shyp (“It’s like FedEx but it’s spelled wrong”), Holzwarth, who it turns out is an employee of Shyp, piped up to explain what Shyp really does. At one point in the back-and-forth I could hear the young woman yell out, “Bring it on.”

Shyp kept coming up over and over. And yes it was nominated for an award. I don’t remember if it won. I don’t care. All I know is that Shyp has never been talked about in one place and time more than it was last night. 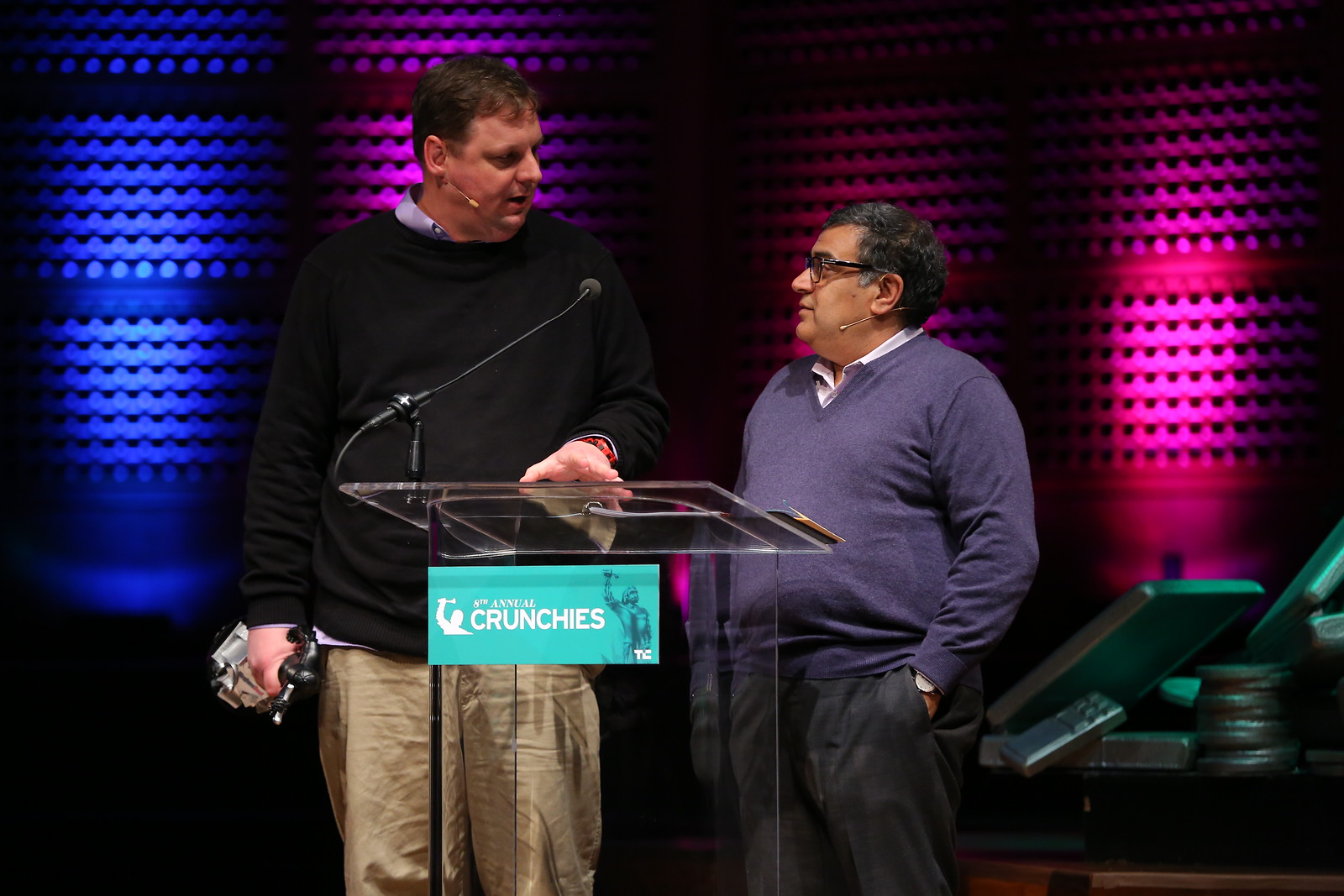 Above: Michael Arrington and Om Malik presenting an award at the Crunchies

7. And the negativity and weirdness just kept going. Later in the evening TechCrunch founder Michael Arrington found something bad to say about just about everything, from the presenter scripts to the emcee to VentureBeat to afterparties to some of the nominee companies. His co-presenter, the lovable (GigaOm founder) Om Malik, had some funny lines, but he could not get Arrington to lighten up. I realize that this is Arrington’s schtick these days, but it’s getting so old it’s getting weird. It was especially out of place last night. 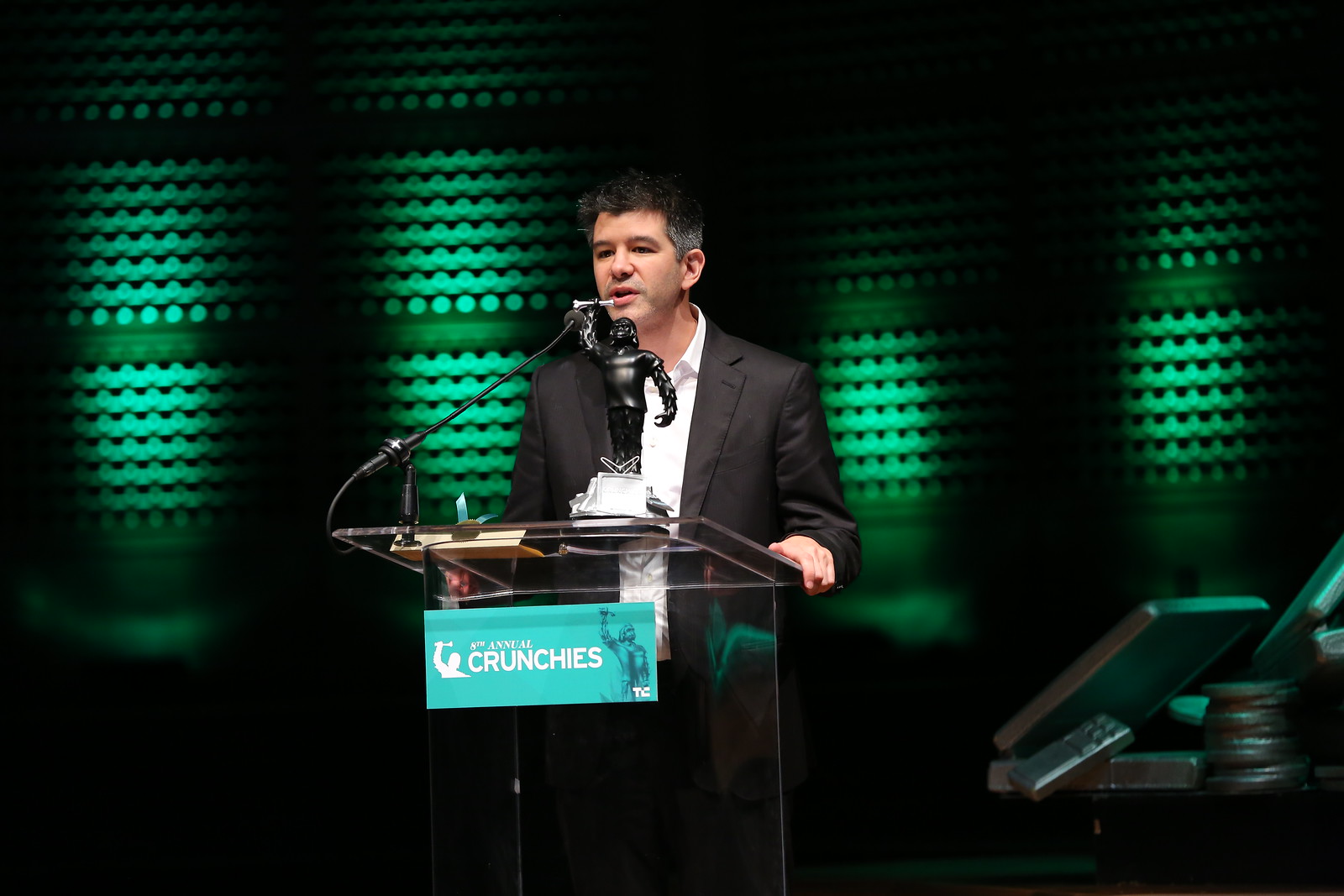 Above: Uber CEO Travis Kalanick accepts the award for Best Overall Startup of 2014.

8. Uber CEO Travis Kalanick had a bad night. He seemed oddly uncomfortable when he was onstage. Sure he was speaking at an event thrown by a media organization, many of which have targeted Uber during the last few months. Some were surprised Kalanick even showed up.

“Let’s just not talk about Uber,” Kalanick said onstage at one point. And when it came time for his little acceptance speech for Startup of the Year, he was tongue-tied and nervous.

After the whole show was over, Kalanick was seen outside the venue yelling angrily into his cellphone, a number of people on Twitter noted.

At certain times during the night, the whole thing really did seem like the tech industry “throwing a fake awards show for itself.” It all felt a little campy. But we all knew that, and it’s OK.

I hope I get invited next year.