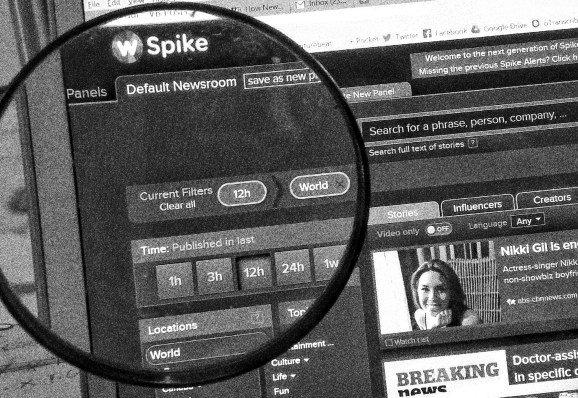 If you’re not fast, you’re last — or so the saying goes. In the dizzyingly paced world of online media, that sentiment couldn’t be truer, and it’s something that Ireland-based NewsWhip is setting out to capitalize on.

Founded out of Dublin in 2011, NewsWhip has emerged as a key tool in newsrooms around the world, counting the likes of the BBC, BuzzFeed, The Guardian, CBS, and ESPN among its users. Company cofounder Paul Quigley said that 80 percent of the “top 25 most-shared English-language publishers” use NewsWhip to identify the most viral stories online.

We last covered NewsWhip just as it secured a $1.1 million seed round back in 2013, and Quigley tells VentureBeat that his company is now notching up $1 million in annual recurring revenue (ARR) — a metric often used by subscription-based companies. He saw a 16 percent month-on-month revenue growth in January and, based on this, NewsWhip is projecting $5 million ARR by the end of 2015.

With the advent of the data-driven newsroom, we’ve seen a slew of companies rise to the occasion, with the likes of Parse.ly, Chartbeat, and Visual Revenue (now OutBrain Engage) vying for editors’ attention. NewsWhip comes in from a slightly different perspective, however — it’s not about tracking your own traffic, it’s all about analyzing what’s being shared most online and through social networks.

NewsWhip tracks tweets, shares, and comments of content across 100,000 sources, including news sites, Reddit, blogs, and YouTube, to let users know what stories are resonating most at any given time.

Its flagship NewsWhip Spike product lets you filter popular content by location (e.g. “U.S.”, “U.K.”, “Europe”); topic (e.g. “Science”, “Technology”, “Sport”); source (e.g. “BBC” or “VentureBeat”); keywords (e.g. “Super Bowl” or “Ebola”); and more. If you want to see what stories have taken off most recently, you can stipulate ones that were published within the past hour too.

In terms of how newsrooms use the data — well, it’s entirely up to them. It could be used to ensure they’re not left behind in a fast-breaking story, or it could be used to help them re-promote related stories they’ve already run themselves. It could also be used to inform any budgeting and personnel decisions: where to send writers and what areas of expertise might be needed.

In terms of how NewsWhip makes money, it charges from $299/month for a small team of 2, through $599/month for a team of 6, and onto customized pricing plans for unlimited users — this is designed for larger publishers.

Though Spike has proven popular with journalists and writers, the company has seen other industries pick up on it too.

“By the middle of last year, we started to see a change in our users,” explained Quigley, who’s also chief executive officer at NewsWhip. “More PR firms, marketing agencies, and even brands started to use Spike.”

Indeed, in addition to the likes of the BBC and BuzzFeed, NewsWhip claims PR heavyweights such as Edelman as clients, while ad agencies including BBDO and DigitasLBi also use it. So what do non-news organizations have to gain?

NewsWhip has also just beta-launched a handful of new features for Spike, ones that strive to surface the humans powering the content. “Influencers” are essentially notable Twitter users tweeting about the stories based on the user-defined filters, while “Creators” ranks writers and content producers based on the “social score” of their content, which is determined by their Facebook and Twitter interactions.

This also helps explain why PR folks may be interested in NewsWhip Spike — it lets them drown out the cacophonous crackle to find the most influential writers on a specific topic. It’s not just English-language publications either — NewsWhip is currently operational in 14 languages, serving 30 countries, with a big focus for Arabic and Russian-language markets in 2015. “Soon, we can show you exactly what stories are about to trend in Kazakhstan — putting aside all the business uses, that’s just fascinating,” said Quigley.

Though there are other companies operating in a similar field, with the likes of CrowdTangle winning powerful friends in the viral content-tracking realm on Facebook and Dataminr doing something simiar for Twitter, Quigley is adamant NewsWhip’s only real competitor is “the old way of doing things,” as he put it — that is, having dozens of tabs open on your computer “trying to figure out what’s getting traction in unscientific ways.”

Though NewsWhip is still headquartered in Dublin, the company also has an office in New York City, where Quigley is currently in the process of moving to help grow the team. And he has big plans for 2015 and beyond.

“We want to map the full genome of social distribution,” said Quigley. “That means going deeper in terms of categorizing content, understanding the relationship between stories, and tracking who is writing and sharing what. It also means going wider, to make sure we’re capturing everything — all the world’s content in every language every day.”