Grow Home is a game that will likely make you love a robot child while hating its reason for existing.

At least, I’m assuming the machine you play as is a child, for reasons gone into later on below. This experimental gambit from Ubisoft’s Reflections studio began as a procedural animation test (meaning animations created in real time rather than framed before-hand) and released on Steam less than a month after its initial announcement. Playing the role of the Botanical Utility Droid (or B.U.D. for short), you must grow and climb a towering organic structure known as a Star plant in order to collect life-saving star seeds for your home planet.

I planted myself in front of the PC to see if Grow Home is a game that grows on you. 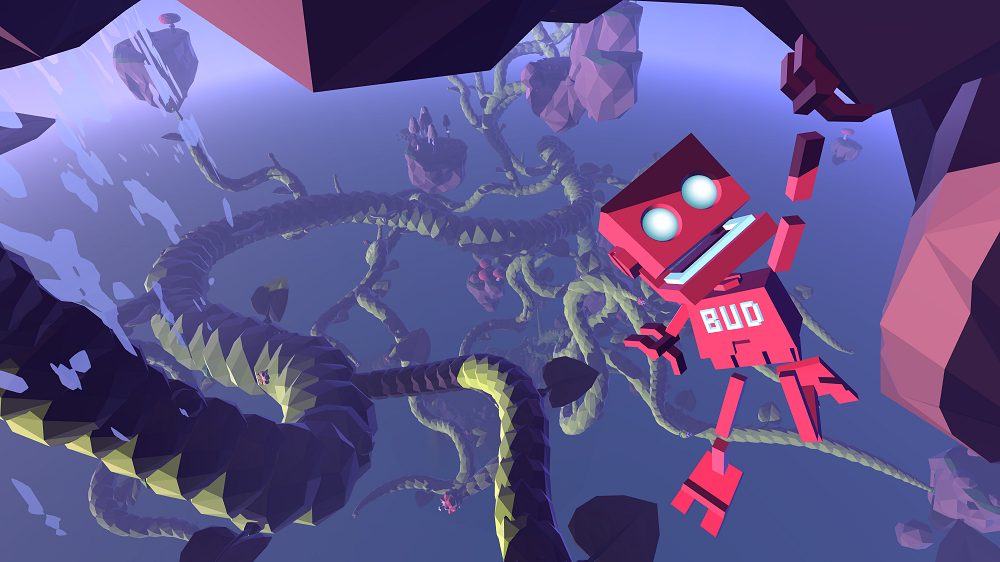 Above: B.U.D.’s adorable personality is expressed entirely in animations rendered in real-time.

You won’t be doing too much outside of climbing and gliding in Grow Home, but that isn’t really a detriment. Your main goal is to expand a single beanstalk-like plant from the beach to the stratosphere, finding and guiding Star shoots that populate along the plant into floating energy rocks in order to reach the next plateau. Along the way you will find and/or upgrade a variety of different methods of gliding to and from hovering islands and hidden caves, and be constantly tempted by collectible shards shoved into nearly every surface not green and growing.

The tiny red robot character you embody on your long climb in Grow Home is an instant charmer. The procedural animations that began this project remain its most sterling feature. B.U.D. bounds forever with a youthful enthusiasm whether on the ground or 1,000 meters straight up. The way it randomly trips over its excited legs and tumbles into a heap gives it a naive, child-like demeanor that’s hard not to fall in love with.

B.U.D. will share your excitement at progressing up the Star plant, chirping happily as you discover another collectible, item-upgrading shard embedded in a cave wall on a floating island. It struggles mightily with pulling down the platforms to activate the latest teleporter save-point. It all adds up to one of the better showcases of weight interaction and competing forces I’ve seen in a game. We may never get a game based on the cult classic sci-fi film Short Circuit, but B.U.D. is just as endearing a companion as Johnny-5 is.

The world you around you echoes your sweet and bubbly robo-pal. Shards sparkle with an enticing glimmer sound in the distance, and your far-off return ship echoes a motivating hum from the stratosphere. The entire planet is a bright and bubbling cartoon of soft colors and round edges. There is a simple beauty to admire in every nugget of audio and visual design in Grow Home, and B.U.D. is its nucleus.

The best possible sense of vertigo 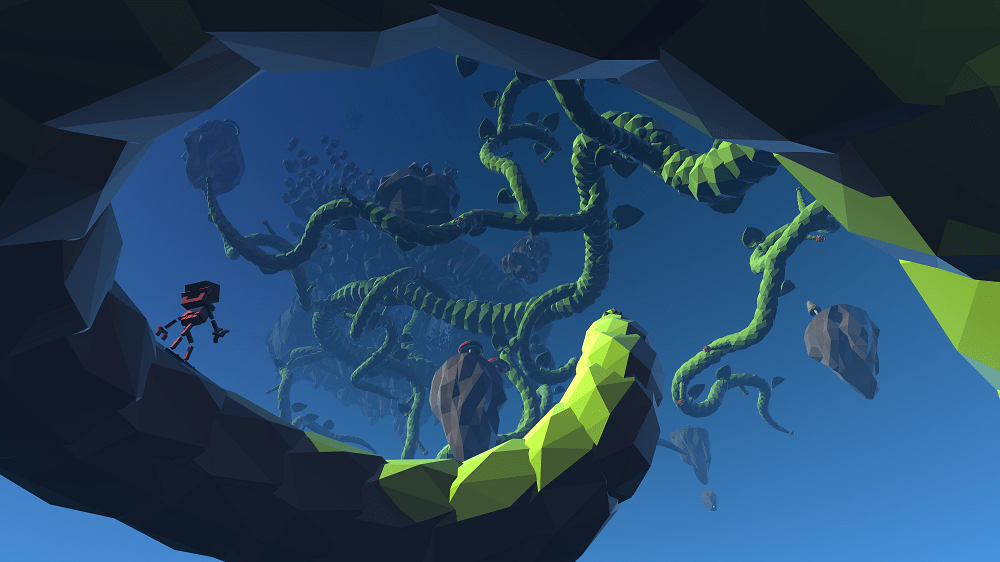 Above: Grow Home is a game that could give you a nosebleed. And that’s not a bad thing.

Your robo-pal may stumble around and never seem to quite find his balance, but the game is not something like Q.W.O.P., the purposefully-awkward controlling “track racing” game where a single key-stroke sends a hapless runner’s knee spinning around his thigh. B.U.D. will have his odd pitches over to the side and a tendency to fall backward on anything steeper than an anthill, but your ability to function within the game still remains stable. Monitoring your speed is about the only new muscle you’ll need to flex when moving around here. B.U.D.’s goofiness is just part of its massive charm.

Your affection for B.U.D. will also play a big role in Grow Home’s biggest thrill. Saving your planet means growing the Star plant 2,000 meters into the air. And unless you want to spend a few boring hours making a spiral green staircase, this means a lot of verticality. When B.U.D. is reaching a quivering clamp to latch onto a bit of plant just out of reach, you’ll make the mistake of looking down for the tenth time, and the growing distance between it and the ground sent my heart racing every single time.

Grow Home does a superb job at keeping your progress visually centered. Each new plateau grants nose-bleed views of the curled vines that took you up to that point. Leaves that extend out from certain points on the vines act as springboards for you to leap high into the air and get a bird’s eye view of your recent growth patterns. And gliding flowers and leaves enable you to temporarily coast in between and around your expanding plant creation. Watching the petals of my glide flower, the only thing between B.U.D. and the empty air, fall away one by one is a sick thrill unlike anything I’ve had in a while.

Grow Home managed to create a lot of the visceral joy of something like Shadow of the Colossus, without a grip meter. The amiable antics of B.U.D. and the screen-filling dominance of the Star plant work to create a unique and often nerve-wracking sense of scale. Every time you mess up and send your little robot friend tumbling to the ground will break your heart. 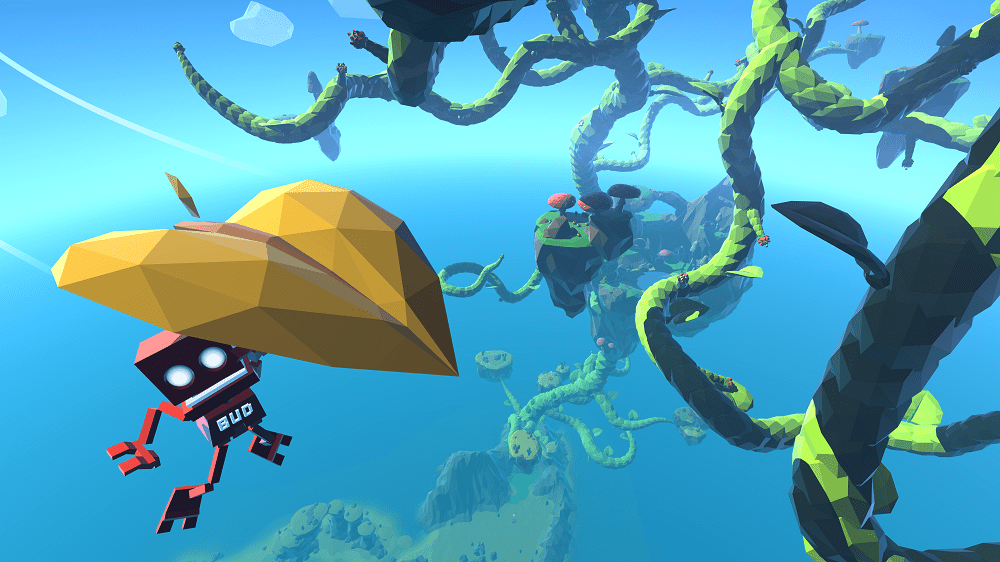 Above: Falling from great heights can be a rush, but climbing back up is a chore.

The long climb back up

One of the biggest challenges in designing a game around climbing is how to effectively punish players for falling down. B.U.D.’s climb in Grow Home grows more harrowing with each meter added to the Star plant, but the higher you ascend, the less fun it is to have to get back up.

There are a total of nine save points between you and saving your planet — seven if you dismiss the ones on the ground and at the end goal. For each save point, you must connect a handful of energy rocks to the plant in order to grow to the next plateau and move forward. And with each plateau, it will take more and more star shoots to reach each individual rock. And herein we reach the chief problem of Grow Home.

Controlling the star shoots is like riding a bucking bronco drunk. While B.U.D.’s spasms and jerks are charming, the limbs of the Star plant are fickle and rage-inducing. You have to pivot shoots in the proper direction toward the energy rocks, but the response time between input and direction change is inconsistent to say the least. It almost feels like a design choice. Later shoots feel less and less responsive, but there is no excuse when your rapidly accelerating plant limb refuses to recognize a button press entirely. Taking the game’s advice and using an Xbox 360 controller is infinitely preferable, but doesn’t completely rectify the situation.

You’ll spend two-thirds of Grow Home’s 4-5 hour run time (for those not willing to explore) cursing at the manic coils of shoots you’ve created just trying to get an extra 200 feet to the east. As an extra bonus, B.U.D. will frequently have to be self-destructed. Its placement on the very tip of the growing shoot will frequently jam him into the energy rock you needed to connect to in order to move upward. The robot will respawn at a teleporter 400 meters down from where you need to be, and the 10 minutes it will take to resume the shaky course just won’t seem worth it. Above: Be prepared to waste hours pixel-hunting for collectible shards if you want Grow Home’s last half to be any fun.

Players can alleviate some of the aggravation of B.U.D.’s climb by collecting mysterious, mineral-like shards hidden around the world. Usually stuck into the sides of rocks, these shards create and upgrade various features to help curb the pain of descent. Collect enough of the 100 in the game, and you get a jetpack with limited vertical ascent capabilities, for instance.

These shards were obviously meant as a driving force to gameplay, with enough shards readily in place in the first few plateaus to grant you access to the first upgrade, a zoomed-out camera view. All the better to see the shinnies with. But pursuing them easily cripples the game’s early momentum. I stared longingly at the Star plant that always dominated my field of view, constantly forcing the camera to scroll around in my long shard hunts. Losing my grip after needing both hands to pry a shard loose from a floating rock made things feel even more like a repetitive grind. But you’ll need that fancy jet pack to make the game’s second half bearable.

Once obtained, the jetpack eases a lot of the headaches of higher plant travel. But in order to maintain your effectiveness on steeper and steeper climbs, you will be buzzing around the Star plant in a collecting grind. You can play Grow Home without collecting a single shard. Just expect to spend two-thirds of your time climbing up the same giant Star plant stock whenever you had the misfortune of mistiming a jump. The sense that there is a “proper” way to play this game never dissipates, and unfortunately, it is also the most tedious way to play. 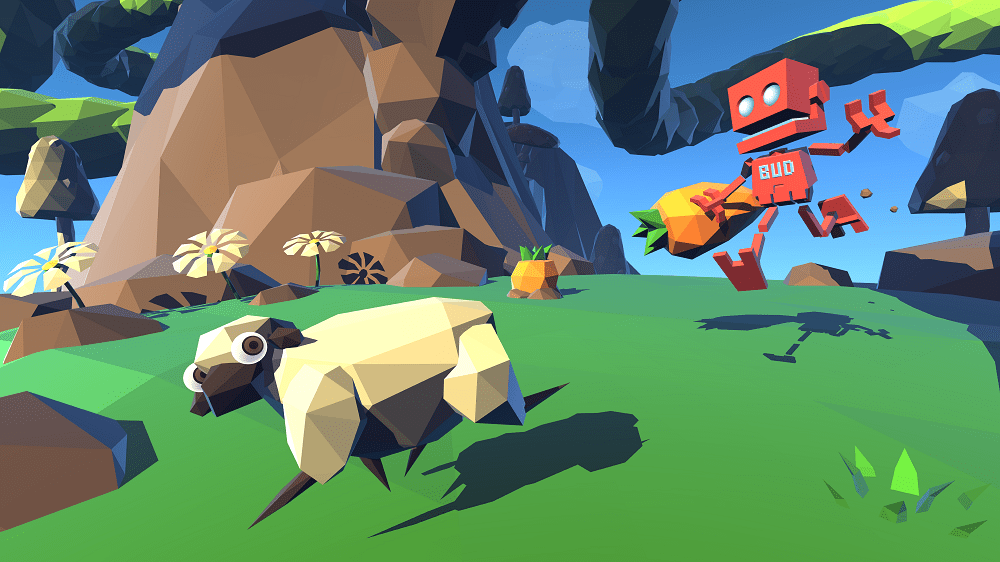 Above: Death to sheep!

Grow Home is a better experiment than a game. The procedural animations of B.U.D. will instantly make him one of the best interactive robot companions you’ve ever had (no, seriously, HK-47 better watch his back). But the wondrous tension of ascending this Star plant is constantly hampered by the need to waste time collecting arbitrary trinkets so you can waste less time on your main mission.

At its best, Grow Home makes you care about a voiceless bucket of bolts more than you ever thought possible, gnawing off your fingernails as B.U.D. nearly trips into a 20-story fall. At its launch price, it still is something worth getting for those willing to spend money to see some cool tech. It will just take some serious dedication for players to want to get back up after you land.

Grow Home released exclusively for PC on February 4. The publisher provided GamesBeat with a digital Steam copy for the purposes of this review.