The gameplay engine that powers Middle-earth: Shadow of Mordor draws from a kaleidoscopic mix of influences, with some pretty removed from Tolkien’s works.

Michael de Plater, creative director at Monolith Productions, shared how the company’s approach to game design allowed for gamers to create their own gameplay stories in his presentation at 2015 DICE Summit, an elite game-industry event that took place in Las Vegas last week.

GamesBeat managed to catch up with him following this presentation — and just hours before it went on to nearly sweep the 2015 DICE Awards, taking eight awards and one nomination, including an award for game design.

Monolith Productions developed the engine that runs Shadow of Mordor to bring something different to open-world games. This Nemesis system continually tracks players as they progress through the world. It adapts to the player’s actions and choices, remembering and reacting to them dynamically.

The system enables a unique approach to storytelling. It generates detail on key points and lets players’ minds fill in the gaps, equipping them with tools to spark their imaginations and letting them form their own stories between key enemy interactions. De Plater calls these points “anchors of gameplay,” and he explains that trying to fill in every single story point in a open-world game would have been impossible.

“It would be a necessity to find the peak kind of anchors for people to latch on to,” says de Plater. “We would have to find one of the peak moments at the top end that people are latching on to, because if you try to do all of it and kind of fill in all the cases in the middle, it would be so explosively complex that you couldn’t make it.”

To narrow down the work, the team at Monolith focused on listing events that players would care about and remember. They decided that being killed by an enemy would be an obvious choice for these anchors. This is why the Nemesis system focuses on the Orcs. It procedural generates completely unique enemies to the gameplay session, and then it uses tracking and dynamic choices to give these foes their own background and story with the player. It makes for a game that feels like the enemies are out to get you specifically.

Inspiration for this system goes back to pen-and-paper role-playing games, says de Plater.

“You’re going to be fighting your way through lots of enemies,” he explained, speaking of role-playing game Dungeons & Dragons. “But occasionally, there will be one guy that survived, or one guy who had something that you can latch on to and remember about him. It’s about taking that guy and bringing him back as a recurring villain.” 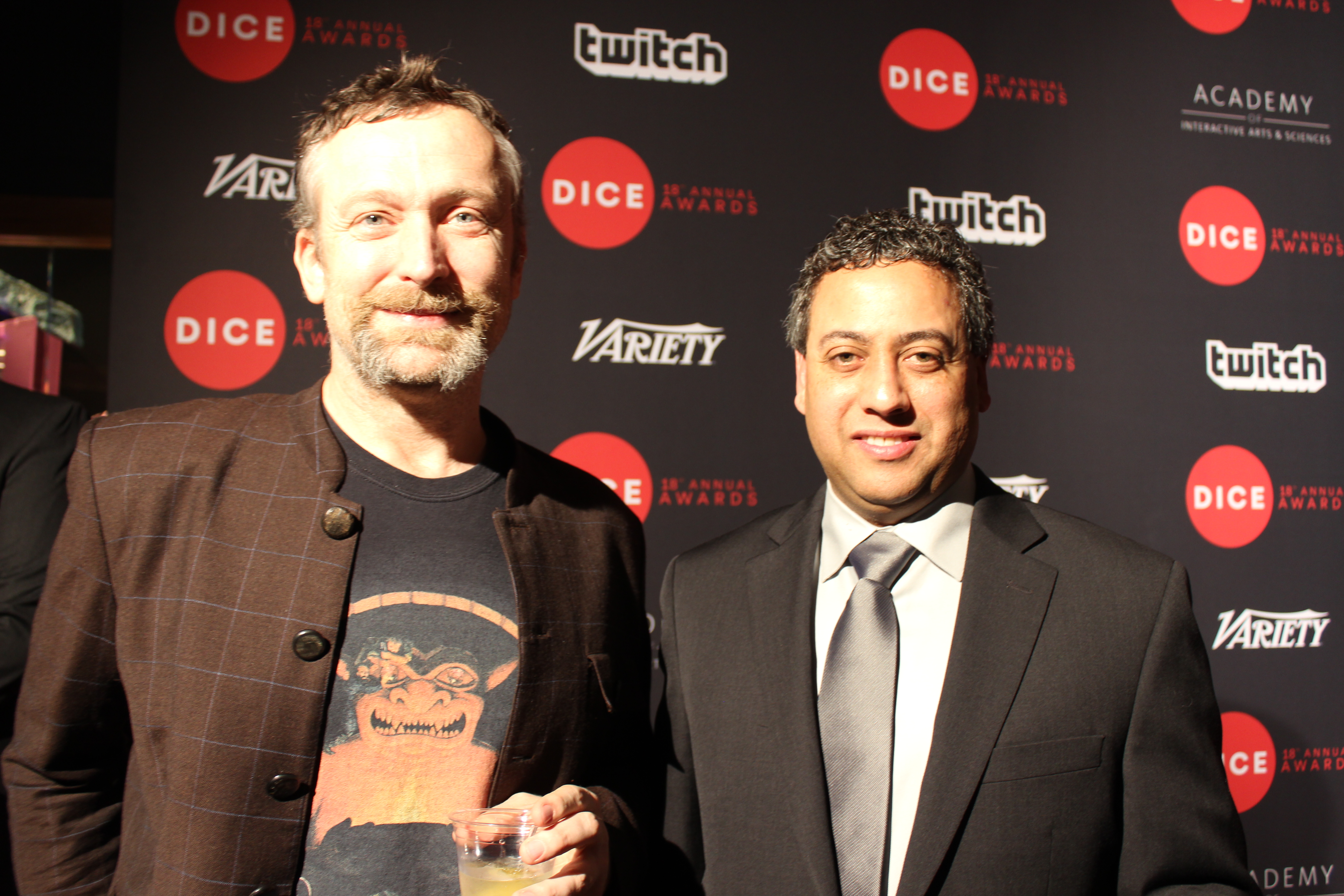 The creative director also calls on his past experience as a developer at EA Sports to help build out Mordor’s storytelling methods. Recalling the way a Madden game’s commentary system would recount the career of a player helped him realize that the Nemesis system’s player-guided story-tracking would work. He says that following the player’s journey through Mordor is not unlike following a rookie sports player as he works through his career. Football teams also have a narrative as they move from season start to midseason and onto playoffs, he notes. De Plater says he wanted to put this all in an action-adventure game.

To give life to the enemies of Mordor, the Nemesis system tracks every battle to a fine level of detail, to the point that even battle scars are reflected on their faces and bodies. De Plater explains that the villains of Batman were an inspiration for this feature.

“Batman supervillains were a huge inspiration for us,” he says. “Whether it’s Two Face or Joker or, really, any of them — almost every batman villain has some sot of physical scar, and some sort of psychological scar, and some way of tracing those two things back to the hero.”

Other movies also fueled the list of anchor story points for Mordor. This is, of course, beyond the obvious — The Lord of the Rings films.

“The fun thing was that every time someone would think of something form a movie and would say, ‘Wouldn’t it be cool if … ?’ You know, any particularly memorable villain or showdown,” de Plater says. “Remember Billy on the bridge when he’s waiting for the Predator to come? Any time anyone thinks of anything there’s a way and a reason to kind of work it in, we did. That was really fun.”

Other video games helped shape the Nemesis system. De Plater pointed to role-playing games, the Castlevania series, and even the Rocksteady Batman games as inspiration. Notably, he says that the slow-motion crash replaying “kill cams” of the Burnout racing games were a big inspiration for Mordor. The way the kill cam showed exactly how a player’s car was taken down by an opponent gave the team at Monolith some ideas on how to approach Mordor’s revenge system.

Some games helped guide the team toward their new approach towards storytelling through nonplayer characters. De Plater uses Lionhead Studios’ role-playing game Fable as an example.

“A big part of the environment of our game is the characters and the NPCs,” he says. “We were looking for a way to be different and do something. People have put a lot of effort into NPCs and companions and friends and allies and so on. In an action game, so much of your interaction and your gameplay is around your enemies. So already, that already is, by definition, the most interesting relationship. But a lot of what people put onto NPCs and friends they hadn’t actually thought about enemies and those relations in quite the same way.

“Just as a particular example, in Fable you walk into the village and all these people know you, are around you, and are friends. But your interactions with them because they’re friendly villagers are very different from your interaction with what your enemies are.”

Games might have already inspired future games from Monolith that would use the Nemesis system. De Plater says that Middle-earth: Shadow of Mordor would require a few hundred hours of play to experience most of what they put in there, and he calls this a lesson for the team.

“It’s probably a little bit more random and systemic than we would make it because there are such cool possible moments that some people do miss altogether,” he says. “If we could roll back time, we would [put] something in more like the A.I. director from Left 4 Dead. Something that says something like that you’ve been playing for 20 hours and you haven’t seen any thing from this list of 100 cool things that could happen.

“Because [the Nemesis system] is random there is a variation, which is great. But some might miss out. I think if you do the sort of straight run through the story path the potential is there is to miss out on seeing stuff.” 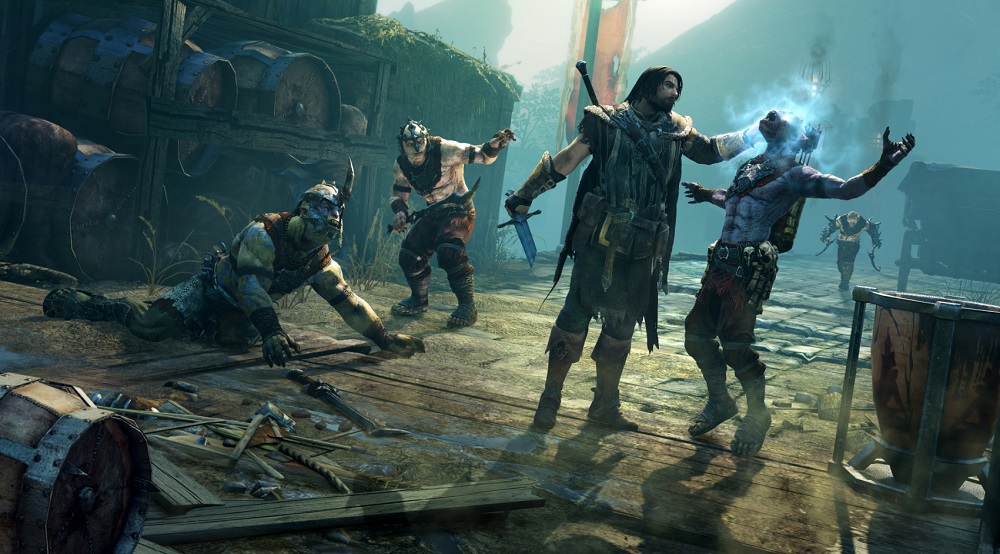 Above: In Middle-earth: Shadow of Mordor, Talion takes control of an Orc.

De Plater cited several books as inspiration for the Nemesis system, saying that it helped keep his approach to Mordor’s design fresh.

“One of my favorite design books is 1,001 Things I Learned in Architecture School. It’s actually a book of design. But there’s so much in common between architecture and game design, he explains.

“Architecture, i think is superficially about engineering and about building things. Basically it’s about psychology. It’s about what effect are you having on human minds within this space. So, a lot of the same kind of processes of approaching it really apply. But that one in particular just really resonated because it’s so easy to approach a game design like that.”

For a system so big and with inspiration coming from so many places, de Plater admits that building the Nemesis system wasn’t easy to keep track of, calling the process “total chaos.” He credits the Monolith team, pointing out that the studio will be celebrating its 20 year anniversary this year.

“Like every game ever, three months before we finished, it probably didn’t look like that. We were freaking the hell out,” he recalls “But I think the team was superdisciplined and supersmart. And it’s the 20 year anniversary of Monolith this year. It’s a combination of very, very senior people, really smart, enthusiastic juniors. And we’re not huge team, so the level of communication between disciplines and among the team is really good.”

Looking back, de Plater says that Mordor could have gone wrong very easily. He credits the team at Monolith for pulling it all together so well.

“The exact same game idea could have been a total disaster,” he says. “The difference between something being an overambitious disaster and actually coming out and doing quite well is all about the execution and closing. That’s why for games — more than any other media — any one discipline can kind of bring the whole thing down.”

We tried, but de Plater wouldn’t reveal what Monolith plans to use the Nemesis system on next, saying that he does not want to give anything away.

“But it’s absolutely true that this is totally our first dance, and we’ve learned so much,” he says.