Among its other incarnations, YouTube has become a marketplace for over-caffeinated types who can’t wait to show you something new they just got.

Put brand products in their hands, and you have the business model of Boston-based Grapevine. It’s a model that has just attracted $1.1 million in seed funding.

The focus is on beauty, fashion, and lifestyle products from Walgreens, Groupon, Styles for Less, and others, but he indicated the company will eventually add other verticals.

Wouldn’t Grapevine’s viewers — 95 percent of whom are women — be put off by such huckstering?

“One lesson I learned in the TV business,” former Discovery channel producer Lattrell told us, “is that viewers are smart.” Stars will be careful to avoid offending their observant fans, he said, because viewers can leave comments and because they are the stars’ “most valuable asset.”

As with other influencer marketing companies, Grapevine’s platform allows brands to post the products or services they want to promote. Registered Grapevine stars — you need to have at least a thousand followers — pick the product and submit a short proposal on how they intend to use the product in their video. There are currently over 4000 YouTubers in its stable of stars, who together garner about 350 million views.

The brand — which is often looking for a certain style — provides talking points and a deadline to the selected star. The deals with the stars are non-exclusive, so they can pitch products for other companies as well. Grapevine said its stars acknowledge that they are pitching a product “in their video or video description via a disclaimer.”

The ‘Tubers have creative freedom, but, before the video is posted, brands get a chance to review it and ask for edits. Lattrell said there is a “red button” to prevent a video from going live, “but we’ve never had it happen” in the company’s two-year history.

After the video is published, the star gets a flat fee based on their previous average views. Lattrell said the fees range from $500 to as high as $30,000, with the average being $1000.

The brand, which pays Grapevine on a per-view basis, receives an analytics report. It includes the number of clicks for the product link on the video’s page, plus details on how many of those resulted in online sales.

“It’s not unusual for brands to sell more products [as a result of the video] than they spent on this marketing,” he said.

Of course, many viewers might not order, say, a new hair conditioner from an online store, so much of the value in these verticals can reside in hard-to-measure product reputation.

Influencer-based marketing is in a boom phase, ranging from the recent launch of Orabrush-spinoff Molio to the blogger-focused NeoReach. Lattrell pointed to two of his company’s biggest competitors in the YouTube space, FameBit and Reelio. 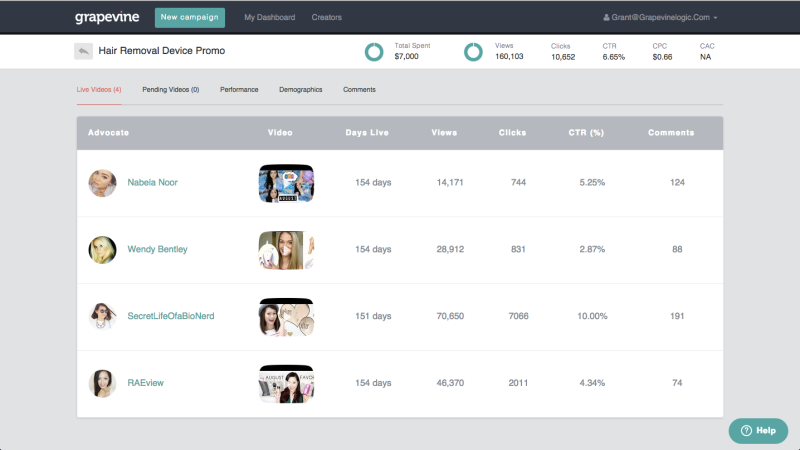 Above: A screen of analytics from Grapevine.

“One of the starkest differences,” he said, is that Grapevine provides “deep analytics for brands, [such as] cost of acquisition.”

And, he added, “you won’t find any other companies in our space providing conversion specs.”

The new money will be used to build out the platform with more creator tools and brand analytics, as well as for sales and marketing.