How could someone re-create the kind of blockbuster experience from the PC and console world for phones and tablets? It’s something developers seem to struggle with. But the latest attempt, Midnight Star (out now for free on iOS devices), is in the right direction.

Made by Industrial Toys, a mobile gaming company that former Bungie cofounder Alex Seropian started, Midnight Star is set in the space-faring future of 2134. Your ship, the Joplin, is investigating a mysterious distress signal, and what it ends up finding isn’t pretty. Written by award-winning author John Scalzi (Old Man’s War, Redshirts), story is at the forefront of Midnight Star. The premise provides plenty of sci-fi paradoxes to chew on when you’re not busy shooting aliens in the face. As much as I’m enjoying it, it’s just a bonus to the surprisingly rewarding battles that keep sapping my iPhone 6 Plus’s battery life.

Midnight Star succeeds because it doesn’t emulate or outspend its flashier competitors. Industrial Toys made an engaging, narrative-driven shooter work well on our pocket-sized computers by blazing its own path. 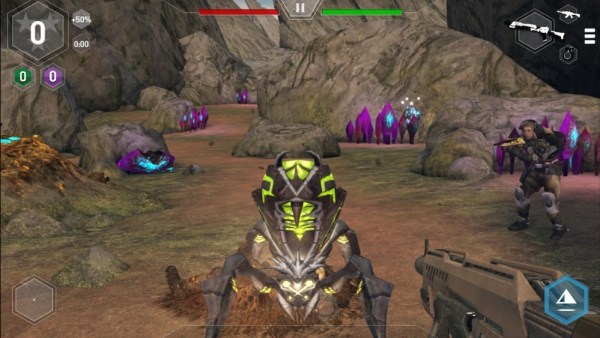 Above: Why did it have to be bugs?

A shooter that just works

I don’t play too many first-person shooters on my iPhone, but when I do, I almost always end up fighting with the controls. Some stick to traditional FPS controls (using one virtual button for the camera while another handles aiming), but that’s a horrible approach for building a shooter on a touchscreen. This isn’t the case with Midnight Star, which uses a simplified system. It moves you around from one area to the next automatically, so you just have to pay attention to aiming (touch the screen in the direction you wish to shoot) and shifting the camera (with the two buttons on the edges of the screen).

For once, I could enjoy a mobile game without worrying about how much the controls are getting in my way.

Learning how to be a better soldier

The gameplay is silly when you think about it — you’re just standing in the open while groups of aliens try to kill you — but the battles are deceptively rewarding. Some aliens are more dangerous than others, so survival depends on prioritizing your targets. Color-coded “threat indicators” let you know how many enemies are offscreen and when they’re about to shoot you. In lieu of a cover system, you have a depletable energy shield that absorbs damage. Special powers known as Hypers help you with crowd-control. The first one you get is Levitate, which suspends aliens in the air, making them easier to kill or giving you a few extra seconds to reload your gun.

Like in Gears of War, reloading is part of the flow of battle. If you don’t hit the reload button before you run out of bullets, you’ll go through a painfully slow animation sequence that leaves you vulnerable.

Since missions rarely last longer than 10 minutes, I didn’t mind playing them over and over to figure out how to improve my score. This is how I learned to be more mindful of Levitate’s cooldown timer and to use headshots as a faster way of racking up kills. Getting a perfect three-star rating for each level is tough, but it’s not impossible. I could feel myself getting better with each playthrough.

It borrows some of the things that made Halo great

Midnight Star shares a lot with Microsoft’s sci-fi shooter, but it’s more of an homage than a rip-off. It has an intriguing storyline (only Chapter 1 is available right now), CG cutscenes, and an enthusiastic announcer that cheers you on when you get a lot of kills in a row. It also has plenty of options you can adjust to fit your playstyle. Each of the 14 campaign missions has five difficulty levels to conquer, and you can tweak a bunch of other things like big head mode or “rainbow blood” (see the gallery) when you create your own Challenges — time-based levels with custom rules. Any player can make a Challenge, and the developer hosts its own events, too.

When I’m bored with replaying story missions, I jump into a Challenge or two to finish achievements and earn experience points. They’re not as thrilling as head-to-head multiplayer modes, but they’re a quick and fun way to compare your skill level to the rest of the community. 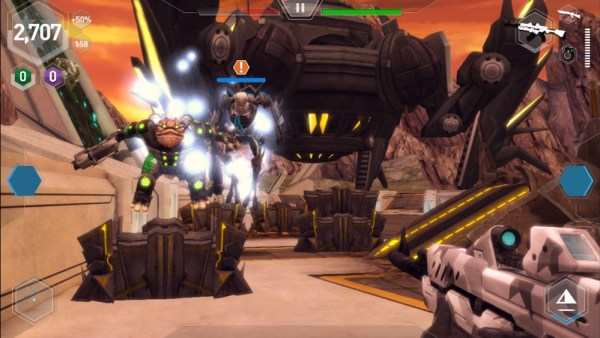 Above: If things get hectic, you can use Levitate to score some easy kills.

Midnight Star’s free-to-play business model is quite tame. It doesn’t have a limited energy system that forces you to stop playing after a while, and it doesn’t lock content behind a paywall. However, its one F2P hook is a little annoying. When you build or upgrade weapons or parts of your ship, you have to wait until you can use them. At first, this timer lasts just a few minutes, but it soon grows to a couple of hours. The more you upgrade, the longer you must wait.

Only Catalysts, a premium currency, can remove these time limits. You can earn some Catalyst from completing specific in-game achievements and by reading the free prequel graphic novel, Midnight Rises. But as far as I can tell, buying batches of Catalyst with real money is the best way to stock up. In general, I don’t like the idea of buying fake money, so I wish Industrial Toys included one just-buy-the-damn-game price so I can use my new guns right away.

I ran into a few “The Midnight Star server is unavailable” messages during its launch weekend. While this doesn’t prevent you from saving your progress (you can still play campaign missions), you can’t join or create any Challenges until the server is back online. It’s not a huge problem, but it’s something to keep an eye on over the next few days. 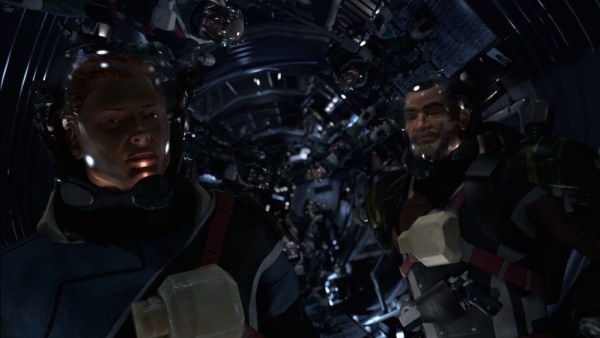 Above: Heroes Charlie Campbell [left] and Sarge get ready to meet their alien neighbors.

Midnight Star isn’t the most beautiful game you’ll find on the App Store, nor does it have the quintessential multiplayer experience for your phone. But none of that matters. Battles are full of feel-good moments — like stringing together a high combo or killing the missile-spewing goblins that are always a pain in the ass — that add up to an incredibly satisfying experience. It takes a while to get new weapons and gear, but as long as Industrial Toys keeps feeding me cool new story missions, I’m willing to put up with the grind.

Midnight Star came out on Feb. 5 for iPhones (4S and above) and iPads (iPad 2 and above). GamesBeat downloaded the game from the App Store for the purpose of this review. 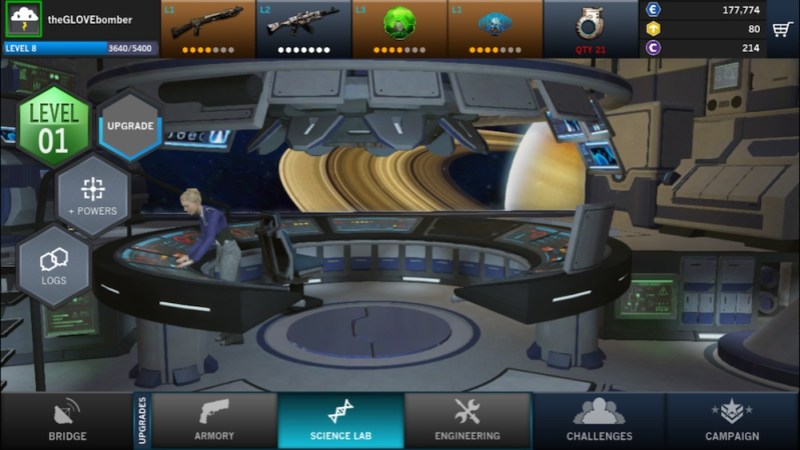 Above: You can explore different parts of the ship in the main menu.