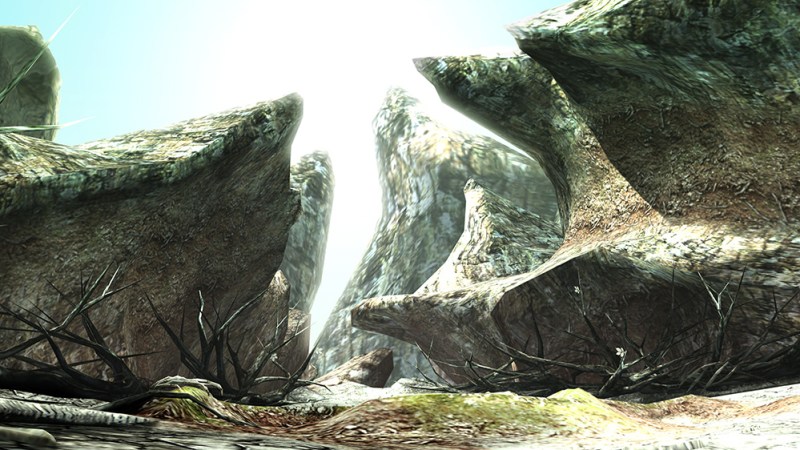 Above: You can climb up rocks and then jump off and hit monsters really hard. Assuming you can get those controls to work.

With all of the things that Monster Hunter 4 does well, it’s most disappointing that its main selling point — fighting ridiculously oversized beasts and emerging victorious — usually feels hollow and chore-ish.

First, the boss monsters are the only creatures that you can lock on to while you’re fighting, but that doesn’t mean what you think. You tap an icon on your touchscreen shaped like a monster, and then every time you press the L button, the camera will whip around to show you where the beast is. But as soon as it moves out of frame or you move the camera, you’re on your own again.

Once you manage to find the huge monster trying to kill you (which shouldn’t be as hard as it is), your end of the fight can actually begin. And while you know from your menu how much damage your death-stick inflicts, you have no idea how much more damage you have to do because animals don’t have health bars.

You could file that under realism, but my health and stamina bars are themselves very real and very visible. And it helps me to know when I’m about to die. Every once in a while, you’ll injure the monster’s leg, and it will go limping off, and then you have to find it all over again. It’s not super-difficult, but it is another tedious step between you and killing a damned leviathan. During one quest, I thought that the wounded animal was leaving me a trail of “Monster Fluid” to follow, but that was just an unrelated item drop from earlier in the battle.

Eventually, the monster will die. And that’s it. It will try to make a big deal out of it, but that just means that a little scene plays after you’ve delivered a hit identical to the 50 or so that preceded it.

And every time this happened, my first thought was nothing like, “Another monster slain, and the good citizens of the world can sleep a little more soundly in their beds.” It was more like, “Finally. Holy crap.”

Killing an iguana the size of a bus in a video game should never be boring, and yet that’s how I felt. And then you’ll get back to the blacksmith and discover that you didn’t randomly harvest the right parts of the iguana to get that mighty sword you wanted, so now you have to go find another one to kill. Above: I don’t know what this is, but I would like it dead, please.

If you own a Circle Pad Pro peripheral or have sprung for the New Nintendo 3DS XL, congratulations — you have the second analog control necessary to make Monster Hunter 4’s camera usable. If not, well … patience wouldn’t be a virtue if it was easy.

You move your character with the Circle Pad on the left side of the device, and then you have three options for handling the camera: use the directional pad immediately below the Circle Pad on the left side, use a virtual d-pad on your touchscreen (which works about as well as any virtual joystick I’ve ever pretended to handle), or just get really good at flicking your hunter off in the direction you want to look and immediately recentering the camera behind them. I chose the third option because it was the only one that is physically possible.

Elsewhere on your 3DS, controls fight with each other over jobs, and it rarely makes sense. For example, you can’t use an item with your weapon drawn because the Use Item button is also the Sheathe button. I’m willing to grant in this case that it’s hard to drink a potion with your hands full, but it’s also impossible to run with your weapon out because that’s the Block button. And you can’t harvest plants or animals either — you’ll dodge instead.

So if you’re trying to grab some skins in the middle of a fight because those animals will disappear on you like that time-lapse video of the mouse decomposing, you have to stop, sit through an animation of the sword stowage, get the next animation of the harvesting, and then get through the sword un-stowage, and then hope that nothing has murdered you in all this time.

And that isn’t even the most annoying animation because for some reason, any time your hero drinks a potion or pops some seeds and feels the rejuvenation coursing through them, they will stop for just way too long to strike a muscle pose as if to say, “Yes! I am feeling better now!” But it’s an unnecessary delay that more often than not will give that giant monster plenty of time to run over and return your health to preitem levels. Above: You can cripple most animals by injuring their horns or limbs.

Some other completely random and unnecessary hindrances

To open the menu that lets you check your quests, combine and equip items, and do pretty much anything else you might need to do while playing Monster Hunter 4, you have two choices: Start and Select. And that’s fine, except that one of the items in that menu you open up is the one that pauses the game. So why not make Select open the menu and Start pause, or the other way around? You have buttons pulling double shifts everywhere else on your 3DS; why are these two buddying up?

And that would maybe be a minor gripe except that Pause is way down at the bottom of the menu list, and simply opening it does not stop the gameplay. And I get that because it’s like you’re running around trying to find the thing you need before monsters swallow your head, but if I just want to quickly pause the game, that is not an option available.

Another strange thing happens at the beginning of every quest. Before you go out into the field, you can stop by a supply box and pick up some things to help you along the way, like potions and food to restore your stamina. But one of the other things in there is the world map, and you have to pick it up before leaving on every mission. Maybe eventually, you’ll know the area well enough to not need the chart, but when that time comes, you’ll probably just choose to take the map off of your touchscreen quick-menu. Because that’s totally a thing you can do.

Monster Hunter 4 has a great game full of options, activities, and a vast world to explore and immerse yourself in living somewhere deep inside of it. And it will even show you these things. But its questionable design and control decisions suck all the fun out of it and make you feel every second of your time in the untamed wild.

Score: 68/100
Monster Hunter 4 Ultimate is out February 13 for the Nintendo 3DS. The developer provided GamesBeat with a free download code for this review.