RapidShare, once the most popular file-sharing service on the Internet, has announced it is shutting down. The service ends March 31, after which all accounts will no longer be accessible and will be deleted automatically.

Founded in May 2002, RapidShare was a one-click file hosting service that grew quickly as pirates used it often to swap various content. In 2009, the site claimed to have 10 petabytes of files uploaded to its servers, and in 2010, it was said to have hundreds of millions of visitors per month, making it among the world’s 50 most popular websites. 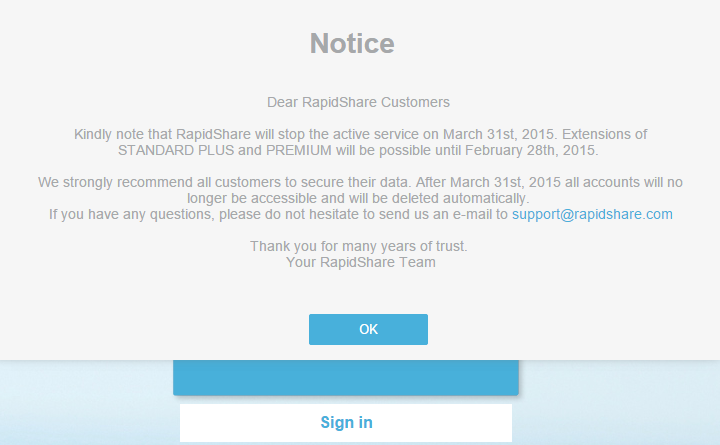 The site’s announcement notes that customers can extend Standard Plus (€49.99 per month) and Premium (€99.99 per month) subscriptions until Feb. 28. That leaves the month of March for pushing users off the service.

The site’s message doesn’t given a reason for the imminent shut down. The company doesn’t have an active blog, and nothing has been posted on its Facebook Page since January 2014 while its Twitter account hasn’t tweeted since December 2013.

If you’re a RapidShare user, you have about seven weeks to move your content elsewhere. “We strongly recommend all customers to secure their data,” RapidShare notes, as people won’t have an option to retrieve it in April.

Increasing competition with cloud storage services is a likely cause of the closure. While RapidShare has no limits on upload or download sizes, it does make you wait to download files if you are not a premium user. Subscribers can download simultaneous large files after a waiting period.

RapidShare has also had its fair share of legal issues between 2007 and 2012. Like many of its peers, the site did not provide search facilities for illegal material and removed copyrighted content when asked. Nonetheless, some courts around the world ruled that RapidShare was responsible for what its users did, while others argued that the site should not be held accountable for illegal uploads and subsequent downloads.

While RapidShare worked to cooperate with the entertainment industry and even tried to rebrand itself as a personal cloud storage service in recent years, the end result was that its userbase fell dramatically. It’s likely the site simply isn’t as profitable as it once was.

A shut down may be the only way out. Other file-sharing services should expect a flood of new customers over the coming weeks as RapidShare users look to move years of uploaded content.