Facebook wants marketers to know exactly how good their ads are. So the social network is adding relevance scores to its advertising reporting tools.

In a blog post today, Facebook said, “We try to show people the ads that are most pertinent to them. That’s why we’ve always used relevance as a factor in determining how we deliver ads. … Relevance score is calculated based on the positive and negative feedback we expect an ad to receive from its target audience. The more positive interactions we expect an ad to receive, the higher the ad’s relevance score will be.”

Facebook said that it will determine an ad’s score based on its objective, but will also take things like video views and conversions into consideration. “The more times we expect people to hide or report an ad, the lower its score will be,” the company said. 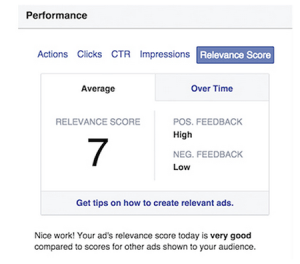 Everything Facebook can do to help marketers know how to better create and target ads is good for the social network’s bottom line — and the advertisers, of course. If a score can help them understand if an ad is good or bad, it’s likely to lead to better marketing over time. In addition, Facebook said that the score also matters because the more relevant an ad is, the cheaper it will be to deliver. The social network’s ad delivery system is designed “to show the right content to the right people, and a high relevance score is seen by the system as a positive signal.”

Ads will be scored on a scale of 1 through 10, with 10 being the best. The score will be dynamic, moving up or down based on how users interact with them. Facebook said that ads with guaranteed delivery — such as those bought through reach and frequency — will not be impacted by the relevance score. “Relevance score has a smaller impact on cost and delivery in brand awareness campaigns,” Facebook wrote in its post, “since those ads are optimized for reaching people, rather than driving a specific action like installs.”

Facebook imagines that the relevance score will be useful for advertisers looking to test out messaging before launching a campaign, or to tweak a campaign in progress.

Ultimately, there are many things that contribute to the success of a Facebook ad, the company said. “Use relevance scores as a way to reach your audiences at lower cost, and to test and learn about your ad creative and ad targeting,” it said. “But understand that having a good relevance score is not an end unto itself.”