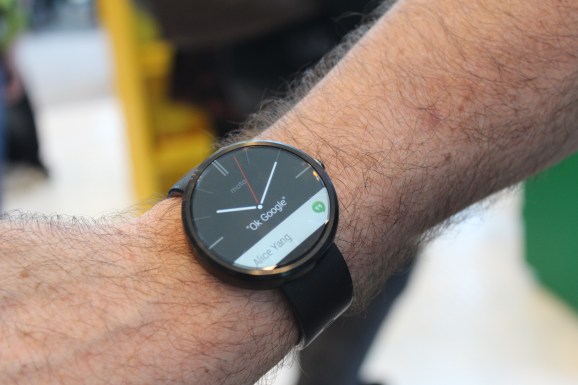 As hype over the Apple Watch reaches a boiling point ahead of its April on-sale date, it’s easy to forget that we have yet to enter the age of the smartwatch. It certainly didn’t start in 2014.

By far the most prevalent smartwatch OS is Android Wear, and a new report by Canalys Research said only 720,000 Android Wear devices shipped in 2014 out of a total of 4.6 million smart wearable bands sold.

Motorola’s Moto 360 led the pack in sales of Android Wear smartwatches. The 360 sold very well until fourth quarter of last year, until it ran into some supply chain issues at the end of the year, Canalys said.

The 360 beat out a number of Samsung smartwatches to become the best selling device in the category in 2014. “Samsung … has struggled to keep consumers engaged and must work hard to attract developers while it focuses on [operating system] Tizen for its wearables,” said Canalys analyst Chris Jones in a statement.

LG’s round G Watch R performed significantly better than its original squarish G Watch, while Asus and Sony entered the market with their own Android Wear devices, Canalys said.

Pebble shipped a total of 1 million units from its 2013 launch through to the end of 2014, according to Canalys. “Continual software updates, more apps in its app store and price cuts in the fall helped maintain strong sales in the second half of the year,” the report stated.

Fitbit remained the global leader in the basic wearable band market. The company has recently gone to market with two new fitness trackers — one with a heart rate monitor — and a fitness watch called the Surge.

Xiaomi shipped more than a million of its $13 Mi Bands. This included one-day of sales of over 103,000 units.

“Though the Mi Band is a lower-margin product than competing devices, Xiaomi entered the wearables market with a unique strategy, and its shipment volumes show how quickly a company can become a major force in a segment based solely on the size of the Chinese market,” said Canalys analyst Jason Low.